I'm into week something or other (don't remember, but it seems like a lot of weeks) building a 1:25 scale "Texas Old Skool" hot rod, based on a car my dad built in the Fifties. And it has been a lot of work so far--my dad thinks maybe I'm putting more work into the model then he put into the 1:1 car, but I have my doubts.

Let's see...between Z'ing a resin frame, putting together a seat built of 2 seats and sectioned....a scratch built intake manifold....creating a steering wheel from 3 other steering wheels....enough planning, scrounging, scratchbuilding and messing around! It's finally time to start gluing some stuff together! 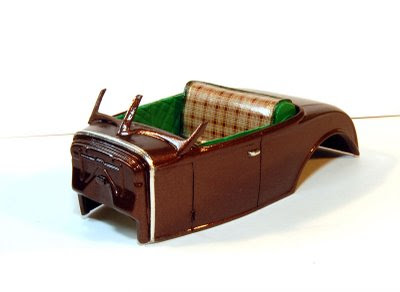 The body, side panels, seat, and dash are now one. I used Devcon 5 minute epoxy to hold everything together. No real fit problems in any of it, although I did forget to paint the inside of the polymer clay interior panels and had to carefully mask the body to touch them up. Overall using Polymer clay for interior panels came out great and it's something that I will use a lot more going forward. The front chrome trim was bare metal foil--it took 3 tries to get it looking OK. As far the paint, it's several coats of Duplicolor metalflake brown lacquer, followed by a pretty aggressive sanding with 1200 grit sandpaper, and finally a coat of Future Floor Polish, brushed on with a large soft brush. No polishing has been done yet, and may not be. The end result is "shiny but not too shiny" which is how Dad says the 1:1 car looked. 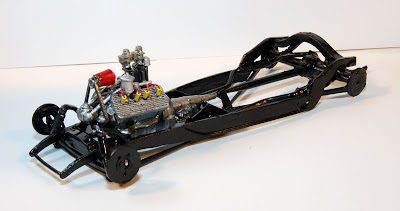 In spite of using the "wrong" engine block and transmission I still had a heck of a time getting the engine glued in and sitting straight. Finally a large dose of Devcon Epoxy and weights did the trick. The front suspension on the 1:1 car was pretty busy looking and I couldn't find a tie rod that fit or looked anything like it, so, I had to scratchbuild it out of styrene rod and Tenax7R. Tenax7R and it's "work alikes" like Micromark Same Stuff are becoming my "go-to" choice for scratchbuilding pretty much anything. One interesting thing I learned about Tenax7R: it makes a great paint remover for enamel paint, whether you want it to do so or not. But that's what touch up paint is for! The whole tranny/drive shaft/differential hook up didn't come out in spite of lots of preplanning, and required to be cut off and reglued, but I doubt anyone will notice. 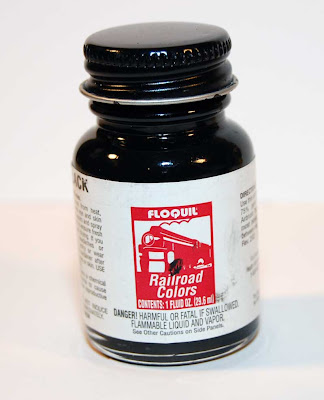 Speaking of enamels....just when you thought you were out, those Testors guys pull you back in....I have begun using a lot of Floquil "Engine Black" paint for my flat black needs. Marketed to the model train set (who in general have a lot more money then us poor model old car builders so I am told) it is a bit on the pricey side, but it looks great and dries quickly. It's enamel--it uses enamel thinner anyway--but it dries fast and smooth. Highly recommended. 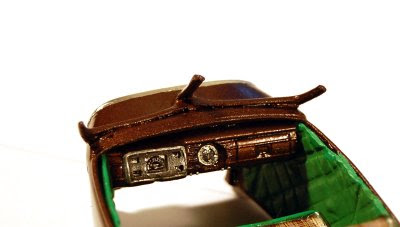 Devcon Epoxy was used to mount the dash in the body as well. As I said in a previous post, the dash is out of a 40 Ford and came from Replicas and Miniatures of Maryland (R&M doesn't have a web site, but you can see a tiny bit of what they do at Strada Sports.)

Now I need to figure out how to get the steering wheel and its column in there. Not sure yet how that's going to work. 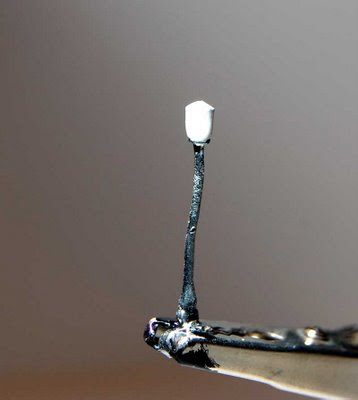 The stick shift was out of a Revell 32 Ford Kit. Dad said the 1:1 car had a "lengthy" stick shift with a teardrop-shaped Hudson shift knob.

After prepping the stick shift and painting it with Testors gloss black enamel, I airbrushed Alclad 2 chrome. The shift knob was scratch build out of polymer clay.

The stick shift itself got a bit pitted when I tried to bend it into shape (next time I have to do that before I paint it!). And as far as the shift knob, the one I built looks a bit more like a marshmallow than a tear. Oh well!

Are we seeing the light at the end of the tunnel? Maybe! I have a few days off from work and maybe I can actually finish this build! It's getting to be about time!!
Posted by Charlie Lamm at 2:47 PM