Roadrunner Continues--and the Next Build.... 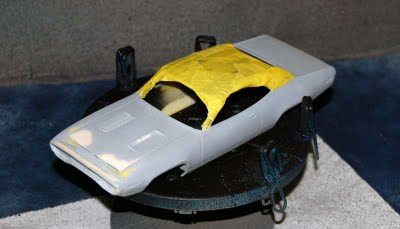 Onward and upward....after a couple of bad weeks I am trying to get to the end of a 1:25 71 Roadrunner stock build. As I've said before, it's not hard finding a GTX in 1:24 scale, but 1:25 RR's are few and far between, far harder to find and thus more challenging....but to make this build not too difficult I also glued the hood shut. So once again I am not quite sure where my head is at with this build....anyway, the 71 Roadrunner sits in the paint booth awaiting more primer.

I have found that letting the booth blower run for 30 minutes before I start painting helps get some of the dust out....I did a lot of test fitting and made sure the side mirrors and bumpers had the means to be glued to the body without making a mess. The Gerald Wingrove book espouses doing ALL the building, testing fitting, and prep work before any paint and finish work, and that sounds like a great idea to me. I always seem to struggle to get trim and finish parts to fit, and if they are already painted it just makes things worse.

And now for something completely different.... 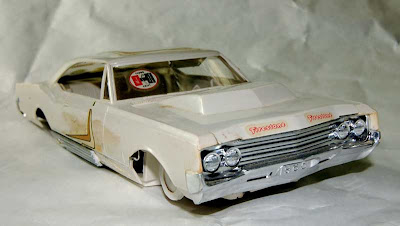 Usually about now I start tinkering with my next build; for the Roadrunner I'm into watching-paint-dry mode, and don't want to just sit around staring at the supid thing.

I was thinking about finishing off one of the customs ("Kustoms") I started several months ago, but something came up on Ebay I couldn't resist--a unpainted (well, almost) glue bomb of a 1:25 66 olds 88 Dynamic.

Growing up I always LOVED this car--especially in convertible form. Like some of the big caddies, the Olds 88 got me into the "I wish I could drive" mode.

I have never seen this in boxed kit form anywhere, although 442 kits aren't hard to find. I also have never tried any sort of glue-bomb-to-slightly-less-of-a-glue-bomb type kit restoration.

In the end I just had to buy it--Joy! I won the bid for about $33; it showed up looking exactly like the Ebay photos. Nothing got broken in transit--the seller did an excellent job packing it up. The bad news is that whoever glued it really went to town, so getting everything apart to start the restoration is going to be tough. Also one of the crazy side pipes is broken, and the custom hood is chipped in one corner. So I not entirely sure what look I am going to go for. Stock would be nice, but it seems a bit dull after the last couple of stock builds I've done. This must have been a "2 n 1" originally and thus, just for nostalgia's sake, I might go for the "drag" version. 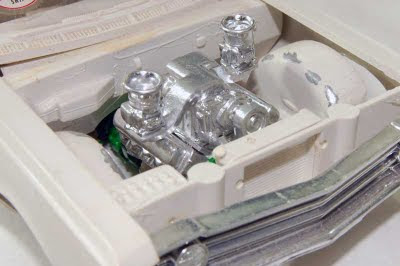 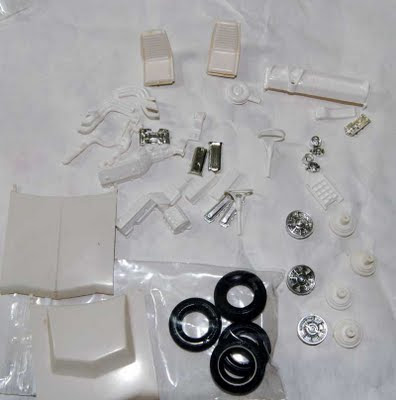 A lucky break: the seller had some spare 66 Olds parts, including an entire additional engine with blower and dual carbs, which he included. I wonder where he got all these parts?

Sadly: someone had taken a soldering iron or firecracker or something to the original build. The ebay listing said someone had melted off the wheels (and you do see some heat damage inside the wheelwells, but fortunately what is visible is OK.) There are also a few burn marks on the body, like someone was trying to torture the poor thing, but nothing too bad.

The seller also threw in some really nice Olds hubcaps and a nice set of scale Firestone white wall tires. I just went through my entire collection the other day picking out tires for the Roadrunner; I have nothing like these 1:25 Firestones, and they are extremely sweet.
Posted by Charlie Lamm at 11:41 AM