The Olds 442 Build has taken a lot longer than I thought...I am ready to finish off the final few bits before I call it quits. 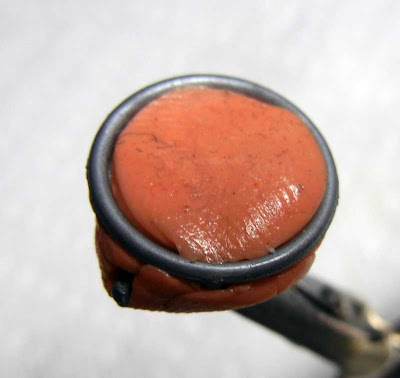 Steering wheels have always been hard for me; for instance, getting the wheel's rim to look right relative to everything else never happens. This time out I tried using Silly Putty as a masking agent--I read in a hobby mag that this should work, but it didn't--the paint leaked under the putty and I had to start over. Some of the putty also sticked to the plastic and made a mess. So much for Silly Putty?

One reason this build is taking so long is that the kit, for all its ambitious detail, has some major flaws...to name a few: there was almost endless body trim to file and sand off; the exhaust system didn't fit the undercarriage; and the windshield glass looked too thick and didn't fit under the car's roof. All of these needed to be corrected, and all took time. 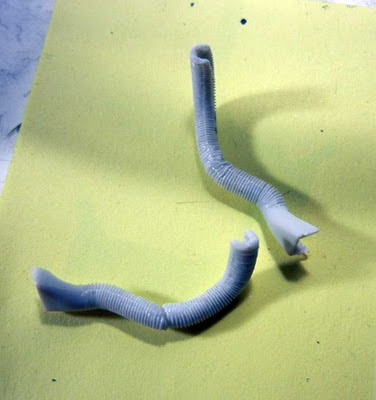 Add to this list the air cleaner intake tubes. As you can see, they don't fit together seamlessly, and turns out, they didn't fit under the hood either. I ended up using a lot of plastic weld to smooth things out and took a Dremel tool to the underside of the hood so the tubes would fit. 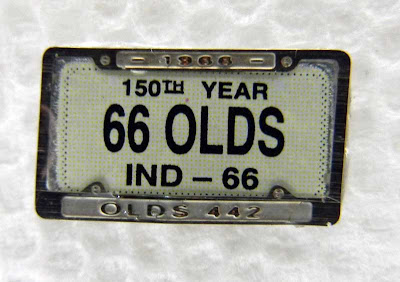 I got a bit more into photo-etch for this build which was fun. Photoetch parts are thin pieces of metal that come on sprues; you cut and prep them a lot like a tiny plastic parts. The goal is to add detail and realism to the build. The license plate holders wouldn't have been possible without Photoetch.

Photo etch was also used on the dashboard--again, fun.... 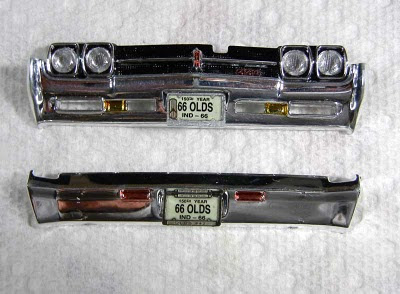 I came into this build knowing I needed to work more on trim, so I spent extra time on things like the front and rear bumper/grill assemblies. The front Grill could still benefit from better separation between grill and bumper, but at some point I had to move on. 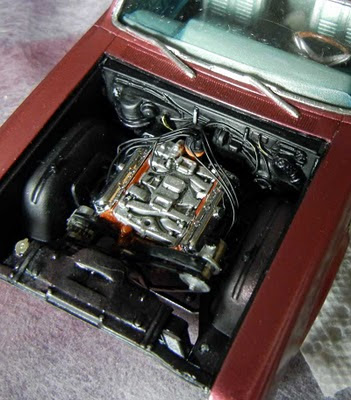 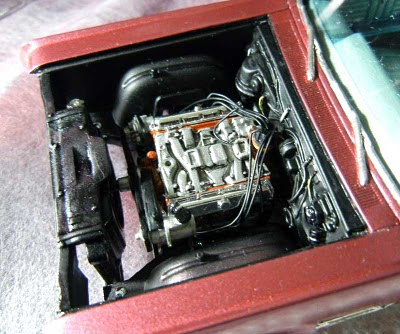 OK, here's the engine compartment before final assembly. Another issue with the kit that I had to fix: there is no good way to get the belt/alternator to stay put when the body is dropped onto the chassis, or, perhaps more to the point, there is no room for the body to fit over the engine as per the way AMT mastered the kit. I ended up having to cut off the alternator and glue it back on after the body was in place.

This was a huge oversight on AMT's part....

So why all the boo-boos? I figure AMT mastered the model in a computer, and during Q A perhaps they realized they made some major mistakes (like, things didn't fit together, um, at all) but didn't have the money or desire to start over. 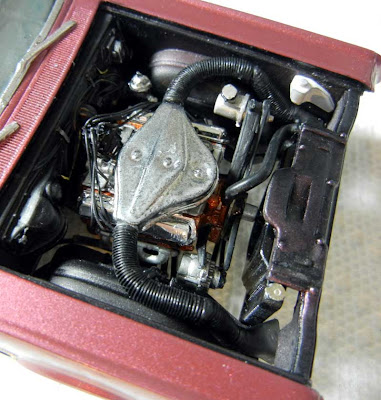 So here's the finished engine compartment. To get those darn air cleaner tubes in place, I didn't install the carbs at all, glued the air cleaner to the tubes, and then put a coil (?) in front of the alternator so you don't notice the air cleaner is postioned too far forward. Good enough. If this build were going into the NY Crafts Museum, I should have recreated the tubes from scratch but guess what? The build isn't bound for a museum. It has been a bit of a surprise to me, however, that a box-stock build like this can be as tough as a custom or kit bash build, due to the fact that the kit manufacturer got lazy during QA. Who would have known?
Posted by Charlie Lamm at 8:43 AM

I always marvel at how well you write and take pictures. That's a great new camera.

And the model looks good, too. I think you did a wonderful job - very professional.