I'm almost ready to finish up assembly of the MPC Vintage 75 Vette.....it's time to get this one done! 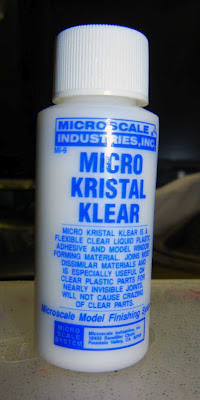 I was gearing up for (and dreading, really) the usual struggle with the scale windshield; from other posts you have heard me complain that glass often doesn't fit right on these old, warped, dusty kits, and this one was no exception; this Vette had the most warped, bent up piece of convertible crap I've seen so far. But! When I grabbed up the Microscale chemicals for last post's decal restoration I also bought another Microscale product called "Micro Kristal Klear" which I will call MKK from here--more because I liked the "multiple misspelled K's" in the name than anything else.... 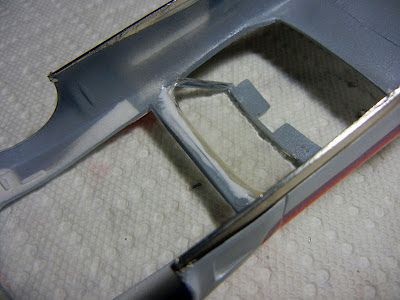 Turns out MKK really works! I taped and clamped the ill-fitting windshield and layed some thick glue around it. Then over the course of a couple of days I removed a single piece of tape or a single clamp and applied a bit more glue. This was repeated several times. In the photo I have applied the final coat of MKK around the bottom of the windshield--that's the broad white band. 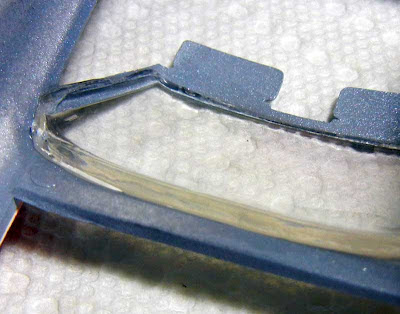 But as you see from this "after" pix, MKK dries almost completely clear, as advertised, and it really bonds! Yes there is a thick bead of glue on there, and the windshield is there for good; you just can't see the glue! This windshield would have been a nightmare using my normal tools (watch crystal glue, styrene glue, or epoxy--all of which i figure would have smeared, run, and generally made a huge mess.) MKK bonded tough enough that I could apply the Bare Metal Foil right over the glued glass and it didn't pop out....

While I was waiting for all sorts of things to dry, I messed around with an Old Buick Wildcat Kit I got on sale at the local hobby shop. This is almost a snap kit, having like 20 parts--no engine, no nothing, so I thought I might fool around by laying on a way too heavy flake yellow followed by some acrylic flames with india ink pinstriping. 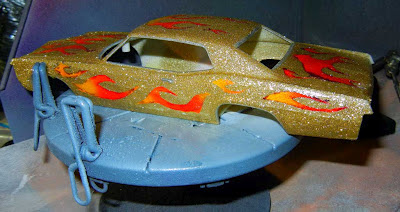 It's all fun--the main takeaway here is that non-scale metalflakes can look OK (?) at scale...I figure if this were a 1:1 car each flake would be as big as a dime, but so what! 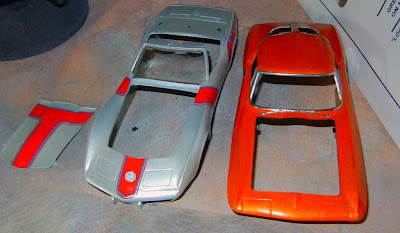 And also I put the Kandy Tangerine House of Kolor paint down on another oldee moldee I had sitting around--a 63 vette. Turns out the 2 vettes might get done at the same time....stay tuned!
Posted by Charlie Lamm at 7:14 PM

That's amazing about the MKK. I wonder what else you can use it for. Wonder if it'll fill bulls-eyes in windshields.

On models, could you use a waxpaper backing - something that the MKK won't stick to - and form an entire windshield?

Your most faithful fun,

One thing I was going to see is how this would work as headlamp material. For instance: create some molds of a sidelamp and then fill the molds with MKK and some yellow food coloring. I can't see why that wouldn't look good....