Hard to believe that's it's been 35 plus years since I the last supercharged scale engine came off my workbench. But here it is. 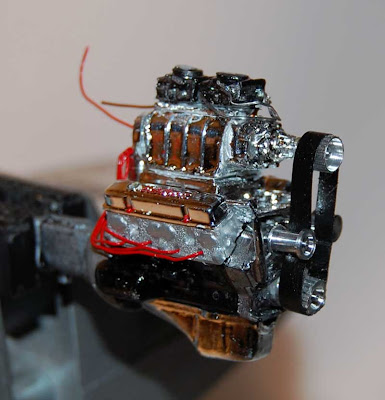 Three plus decades have gone by; my techniques and tools have changed but I don't think the results have gotten any better. There were no acrylic paints back then, no photoetched add ons, no CA superglue or epoxy. Armed with only an Xacto knife, some Testors enamels, and Testors glue, I was waltzing away with trophies from the local hobby shop and loving every minute. Looking back I don't really know why I stopped building--I found it the hobby quite relaxing then much as I do now--I was getting interested in girls I guess, and the two don't go together that well.

I don't remember modeling seeming hard at all back then....I don't remember doing a lot of work to seal the annoying split that runs down the joined halves of the transmission or struggling with getting a blower on straight. But somehow I remember being better at this way back when compared to now. I remember building a rear-engine funny car with a "swirladelic" paint job that was--as I remember anyway--awesome. The paint had to be seen to be believed. It took 1st place at the LHS annual model show getting a 10 out of 10 for the engine build (which was fully plumbed as I remember). I was 12 years old. The model is long gone now, and no picture of it remains. Too bad. 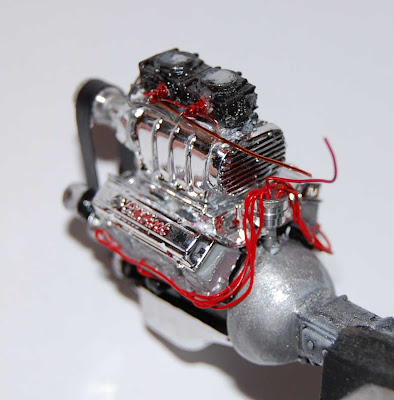 OK fast forward to this week's engine build. It took me the better part of two hours to build and install the distributor. How did it come out? Well, OK. It still doesn't look that realistic to me, but it's better than the big glob of black goo on top of the distributor that I was using a few builds ago.

The tiny photoetched details on the carbs (which came from DetailMaster) took quite a long time to build and didn't come out looking that realistic. It's hard for me to describe how tiny the photoetched carb parts are, and my camera doesn't seem to have a suitable macro lens to catch this either. The instructions said to use a pin vise to drill holes to affix the parts to the carb, and I have a really tiny pin vice, and the holes I drilled were still way too big. And how to find the tiny wire to plumb the linkages and whatnot? The smallest wire I had was solid 30 gauge and it was too big.

Without the correct pin vise and throttle linkage materials, I ended up bending the photoetched pieces best I could with tweazers and gluing them to the sides and fronts of the carbs with Devcon clear epoxy. Next time I might use some sort of plastic or brass backing to have the parts "stand off" from the carbs a bit; that might look more realistic.

After I had started down this path I discovered that MPC's artisans had cut the carb tooling so that some molded-in linkage was present on one side of each of the carbs already (they came out of a "switchers" kit I believe), and IMO, just putting some wash on that would have looked better than what I tried to do. 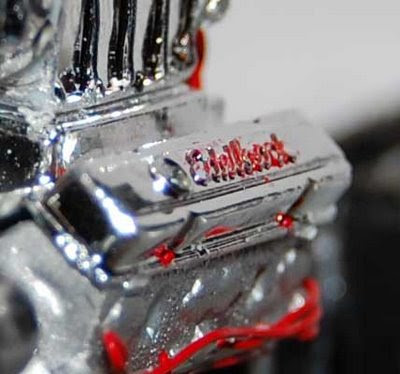 Another thing I tried out for this motor was "dry brushing" the logos on the valve covers. The idea is to put paint on a flat brush then brush almost all the paint off onto a piece of paper towel or whatever. Then brush the remaining tiny bit of paint over raised letters, over and over and over, until the "dust" left on the brush colors the raised surface.

I have tried this on several occasions with only modest success. I guess I have gotten a bit better as it as time goes on, as this time what I ended up with was pretty good; not a total disaster. I bought a Tamiya brush especially designed for this, and it might be my imagination but it seems to have helped. As you can see from the close up photo of the valve covers the Edelbrock logo is OK, but it's missing some of the paint on the "E". I don't have the courage to try to fix this, and other means (putting paint on a toothpick and then rolling the toothpick over the logo) haven't led to good results so this might be as good as it gets. 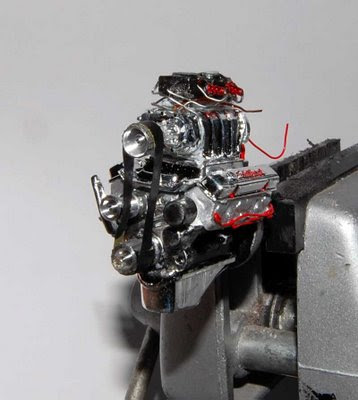 I paid $12.50 for the pulleys for the blower and crankcase from Arrowhead Aluminum specialities, making it by far the most expensive aftermarket goodie on this build. Arrowhead has some really cool stuff and their parts are reasonably priced--$12.50 might seem like a lot until you see the detail on the pulleys--it's really, really good. (As a slight aside, I read on the Arrowhead site that the owner and guy who makes all the parts is having horrible health issues and it's delaying order shipments. It is a very sad story--you can read about it on his website....I wish him all the best and a speedy recovery).

I had one heck of a time getting these aluminum parts to stick to the plastic supercharger and crank cover. I tried using five minute epoxy, always my first choice, but it never seemed to stick "fast"--I could bend the affixed part with my hand, which of course meant the belt wasn't going to looked "stretched" when I attached it.

I ended up using a bit of CA glue, applied with some applicators I got from Micromark, quickly followed by CA accelerator. It ended up looking a bit "cloudy" where the CA touched the chrome, which I had to touch up with silver chrome enamel paint.

The fan belt included with the parts was way way too big and didn't look "scale"; I ended up using masking tape cut to size and painted with flat black Floquil paint.

So this was more work than I thought it would be. Overall, scale engines, like scale "glass", are always harder for me to pull off than I think they are going to be. It's funny because as a youngster I never was bothered by either a bit.
Posted by Charlie Lamm at 6:44 PM