Hello again, we are continuing to build a 55 Chevy scale model inspired by the street gassers I saw at a recent Billetproof show. 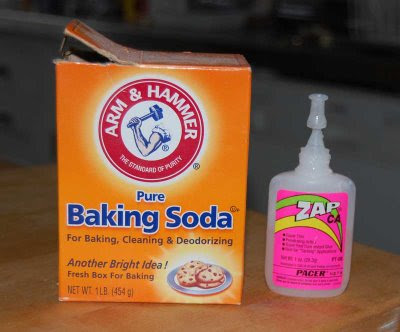 After joing them together with a pretty heavy dose of Tenax7R glue there was a pretty big gap between the 55 floorboard and the Henry J. I would have normally used the usual putty/sanding sort of technique to fill it, but I read online about using superglue and baking soda to fill gaps instead.

Since this was going to be the underside of a model that wasn't going to get seen much I figured it'd be a good time to experiment with this new means of filling gaps and seams. 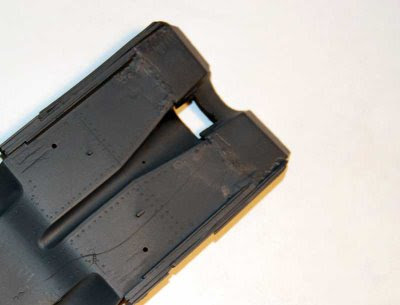 Here is the result. There was a 1/4" or so gap in the floorboard that's gone now. In its place is a fairly rough and not great looking big heap o' CA glue.

To pull this off layed down a fairly generous pool of CA glue then dropped pinches of baking soda. It works! But there are some things to keep in mind. First I found that a small pinch of baking soda goes a (very) long way. The baking soda seems to act as an accelerator and soon as it was dropped into place the glue dried rock solid. If I put in too much I ended up with a small mountain of glue and baking soda that was rock-hard--as if the glue was sucked up into the mound--and ended up with scale ant hills.

Second, the dust that comes off the CA/baking soda when you sand or file it is super nasty. Keep this in mind when you're working with it. I was grinding down my CA glue/baking soda ant hills when I got a bit of CA dust in my eyes and it burned like no one's business. So if you're going to sand the CA/baking soda mix after applying, make sure to wear eye protection and a good respirator. 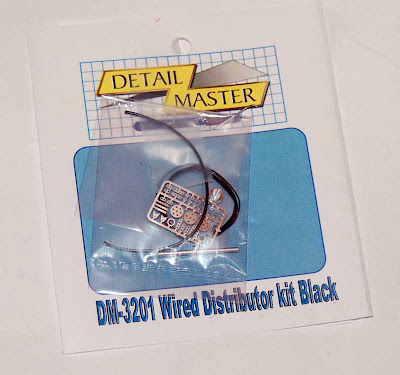 This week I was working on the 329ish Chevy engine that's going to go into the Chevy. If you've read previous posts you probably know that I am really crappy at building distributors and wiring them--I have made a huge mess out of this many times in the past. I am always looking for ways to improve and this time I bought a distributor/wiring kit from Detail Master. It wasn't cheap--about $6US, and there were are a lot of tiny parts that needed to be assembled and painstakingly epoxied together--the distributor is like a whole build all by itself.... 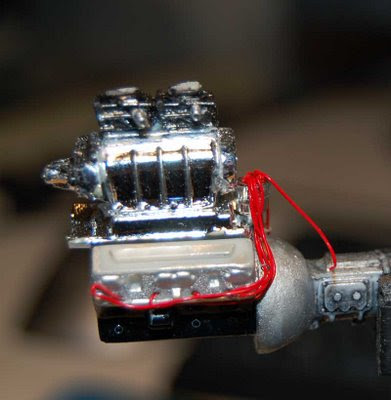 But the results aren't bad, and this is me we're talking about building it. It's still not perfect but this is turning out to be my best distributor effort to date. So I am going to keep working with this distributor kit for awhile.


The fuel lines are next. I should have some pix in the next few days. 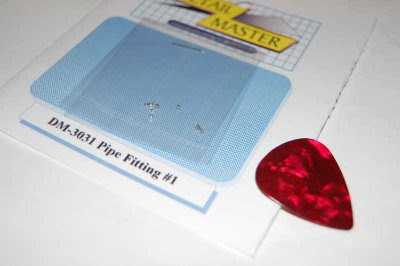 For reasons not entirely understood I have decided to try to mimmick the uber-detailed builds I see in hobby mags and on line for this engine. I always am fascinated the "best in the hobby" type guys who are "fierce competitors" when it comes to detailing their builds so they can win best of show at some hobby fair. These guys must have open accounts at places like Detail Master, or get free goodies in exchange for mopping the warehouse floor, or whatever, because all the superstars seem to use tons of these aftermarket parts. They are indeed expensive, and as you can see from the photo, really, really tiny. Unfortunately (?) the only thing fierce about me is my far sightedness.
Posted by Charlie Lamm at 3:02 PM