55 Chevy--"Engineering" for a Cleaner Build

We're approaching the holidays and what better way to mentally prepare for the in-law onslaught then to get some quiet bench time. This month I'm trying to wrap up a highly customized 1:25 '55 Chevy Gasser I started a few weeks ago; I feel if I make a good push I'll be ready for final paint and assembly before too long. 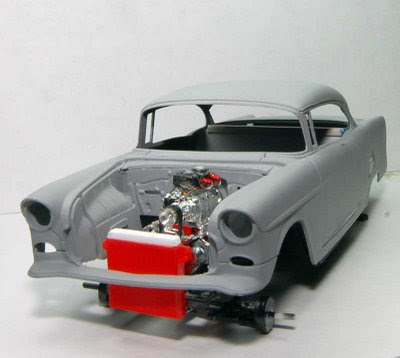 I've found in the year or so since I returned to this hobby that I need to "engineer" my custom parts before paint and assembly and have a working plan to get everything to fit together before I do a lot of gluing. Once my plan is in place, only then should I do a final prep of the parts, paint, and assemble. 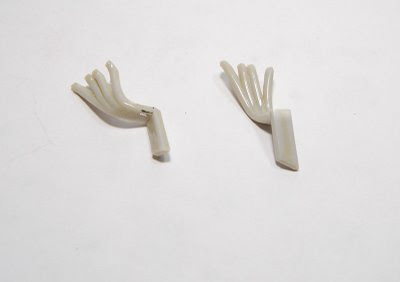 The fit of the exhaust headers is something I have struggled with on past builds. It's easy to mess up a good engine compartment build with headers that don't fit quite right. The 55 Chevy Gasser build is tricky in this regard because there is very little room to pass the "drag ready" headers out of the engine compartment without being blocked by a body panel, a frame rail, the front wheels, or whatever. The headers I ended up using are from the AMT/Ertl 55 Chevy kit #31931 (after many attempts to use others from different kits and my parts box). After a lot of test fitting and trial and error I decided to cut in two the headers I was going to use and reglue them to point the exhaust downward rather than out the side of the body. Looking at pictures of 60's era gassers, this look was pretty common so I am happy with this decision. 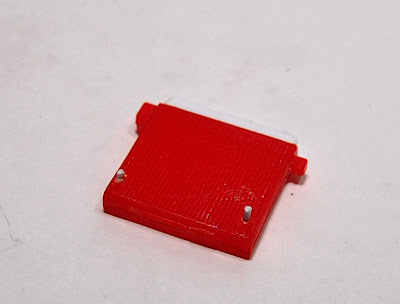 I have had serious fit issues in past customs with the radiator--this is something I don't think about until the end of the build, and then I usually make a mess trying to get something into an already-painted engine compartment. In this case, the radiators from the two primary kits I am "marrying together" for the build, Revell's 55 Chevy # 85-2069 and Revell/Model King's 51 Henry J Gasser # 85-2036, didn't give me the right look. I ended up going to the parts box and finding a radiator from a 1:24 pickup; then, I scratchbuilt the radiator tank using styrene strip. To get this to easily mount to the frame I "pinned" the part--drilled small holes in the radiator and frame and then glued in small-diameter styrene rods so the part could be installed as if it were from a snap kit.

I continue to find lots of uses for the "Samestuff" or "Tenax7R" or "Pro Weld" type glue, but I am finding limitations: you can't use it as a replacement for regular styrene glue--it works best when the glue is applied on the outside of the finished part and allowed to flow in and fill the joint you're trying to glue. Some of the rear suspension work I glued up with Tenax popped off during this photo shoot. It's back to Devcon Epoxy for this sort of thing. 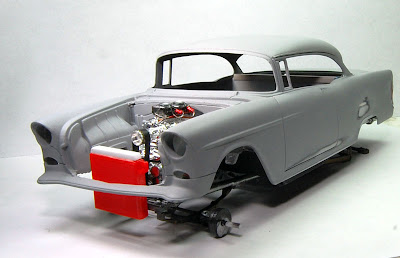 Overall the build isn't looking too bad; I still have to figure out how to join the wheels/tires to the axles and what I am going to do about the front grille. The interior is going to be simple and the seats and roll bars are fitting OK. I am still not sure how to get the steering column in there, as the dash is scratchbuilt.

Painting of course is a lot of work but I look forward to it--it's one of the most relaxing parts of the hobby. Beyond that the final assembly should be fairly straightforward.