55 Chevy Gasser--We Have a Roller

It's the day after Christmas and I'm off work so it means a little more time to work on the 55 Chevy Gasser build. I have been told in the 1:1 world when the custom builder gets the frame/wheels/tires/axles all in order the project becomes a "roller". 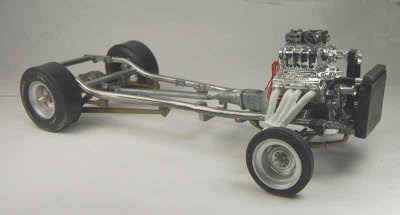 Since the last post I've pretty much finished the chassis' basics. The front "skinny" tires came from Revell/Model King's 51 Henry J #85-2036 while the rears came from Revell Thames Panel truck #7609. The wheels are from a Revell Parts pack C1142 that I got off Ebay--expensive, but worth it--these are really cool wheels! 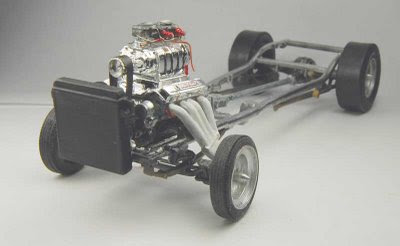 As I said last time, the radiator was from the junk box, I think originally from a Monogram 1:24 pickup. I scratch built the radiator plumbing by bending styrene rod and "pinning" the end of it (by "pinning" I mean drilling a small hole and putting a smaller diameter rod in, then drilling a mating hole where the hose needs to attach; sort of made it like a snap-together). I ended up having to further modify the exhaust headers as the way I had it before didn't allow the front wheels to be posed. Good thing to test fit! The hose clamps were simulated with some chrome 3M tape I got from Walmart. 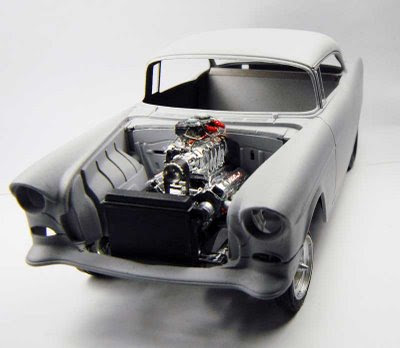 Speaking of test fitting here's how things are looking with the body in place. I am leaning toward not using the hood at all--since enough work has been done on the engine that I want it displayed all the time.

So the question is: what color to paint this? I was thinking about some sort of radical candy thing, but, in the end I am going to experiment with an all-Tamiya finish, which I know some other modelers swear by, and it's something I've never tried. 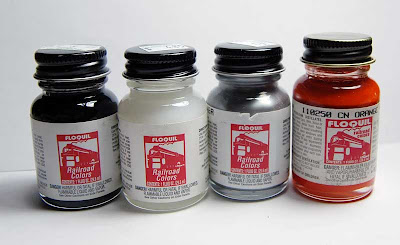 Over the holiday break I went with my family to the local train store and stocked up on some more Floquil paints. The more I use these the more I like them! Using a flat Floquil color and then adding more Floquil flat clear on top is a good way to get realistic finishes; the gun metal and graphite paints are a good complement to the Tamiya colors with the same name. It goes on smooth and evenly, and doesn't stink too much. It's a bit pricey but worth it. Overall Floquil paints are highly recommended.
Posted by Charlie Lamm at 12:39 PM