I have been out of town for the past 2 weeks on business....I thought I could visit some cool hobby shops while on the East Coast but no dice. In the meantime, the 69 Charger project was languishing back here in California. 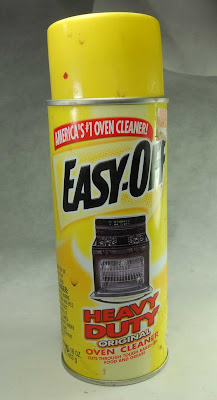 As I said last time, a clearcoat disaster means I have to strip the paint off the 69 Charger 500 and start over. After a bit of research I have found that Easy Off Oven Cleaner is supposed to be a good bet....but does it remove lacquer? Maybe and maybe not, but I'm on day 3 and the 3rd application of this stinky stuff and so far not a lot of paint has come off. I have also heard dot-3 brake fluid (Dot-2 is best but isn't made anymore) works as well. If the Easy Off continues to be Not-So-Easy-Off I may need to resort to Brake Fluid next. 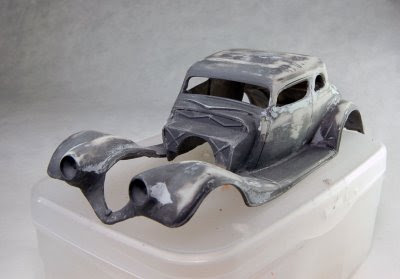 So while the Charger body is sitting in Tupperware getting stink-i-fied by Easy Off, I figured it'd be a good time to take an inventory of other projects I've been working on that are on hold now. First up is a 5 window 32 Ford that was chopped; the rear section is from a 36 Ford 1/24th scale; and the headlights are from the AMT Wagon Rod #30087 which I bought off Ebay for something like $3. I chopped the headlights right off the Wagon Rod's fenders and epoxied them to what you see here. I have a chassis already built for it, and am debating a using a Buick Nailhead engine versus something kitbashed from various Revell Packs. Sanding it was taking forever, so I shelved it, but now that I've learned the trick of making a sanding block out of foam rubber I'm back in business. 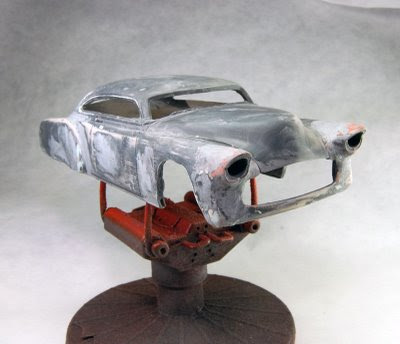 Second up is a project inspired by the cool stuff done by Bill Stillwagon; a 51 Chevy curbside that's been made into a hardtop. If you want to see an awesome builder, go to his site--his stuff is the coolest! Anyway, the 51 Chevy was shelved because I wasn't sure how get the sanding done. A chassis/wheel setup is already built for this; I was going to put some sort of cool engine in but couldn't get the hinged hood to sit right so it's going to be a curbside. 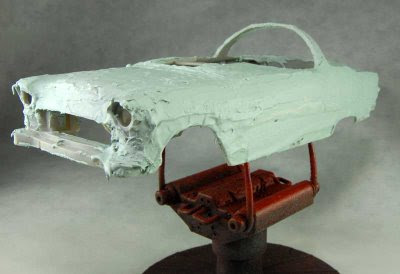 My most ambitious project to date--this is pretty experimental for me--is a marriage between an AMT 55 Chevy body and the AMT Silhouette #38450. This is a sort of oil-and-water amalgam of different kits and as you can see is made up of way too much Evercoat polyester putty. No idea if it will ever come out, but I thought it'd be good practice to see how far I can stretch the polyester putty thing. 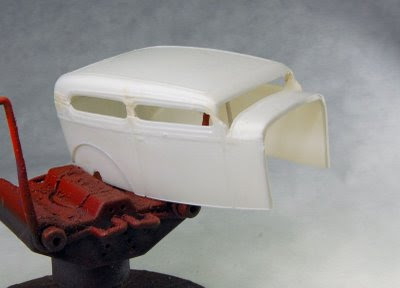 Finally the 6" chop on a 32 Ford Sedan. This is the "Orange Crate" look. I have already finished a 32 Sedan chopped dragster, but I thought it'd be fun to revisit the Orange Crate idea for a street car or maybe a salt flats racer. Not sure where this is going yet, and the chop is a bit fragile, so this one will be a lot of work to finish up.

It's tempting to jettison the 69 charger since the loss of the paint, but, I want to stay focused. The 69 Charger has made me realize that I like customizing a lot more than making knock offs of "showroom model" type cars, even though I love old Mopars. But there is only so much time, and many ideas to chase down--I was going to build 3 stock Mopars--the Charger 500, a Roadrunner, and a '71 Charger R/T, but at this point that seems unlikely. The next build will probably be another custom of some sort.
Posted by Charlie Lamm at 10:17 AM