I've been on the road again and the bad news is that the 69 Charger body, whose lacquer paint was destroyed by using an incompatible clearcoat, still isn't stripped. I've now applied 3 coats of Easy-Off, and for the most part the stripper is working. What started as a relatively easy almost box stock build has turned into the project that won't end.

Like everything else on the Charger 500 build, the paint stripping is going slowly! Nothing much happened after the first 2 coats of Easy Off. After coat 3, to my surprise, the paint didn't flake off; instead the Easy Off seemed to attack whatever binds the paint to the plastic. About 90% of the paint peeled off like a skin off a grape. Whatever works I guess. But there is still 10% that refuses to come off, so I just started Easy Off coat 4 last night.

So as not to sit around and "watch paint dry" (actually, watch paint be removed) it's on to another project I had shelved. As I said last time, one of the backburner projects I'm working on now is an attempt to marry a 55 Chevy with a Bubble Top custom, in the hopes to come up with some sort of scale Darryl Starbird type custom.

The 55 Chevy donor is an AMT body that "lost out" to the Revell 55 Chevy in the 55 Chevy Gasser build. I didn't like the roofline on the AMT body so it seemed like a good candidate for a roof conversion. 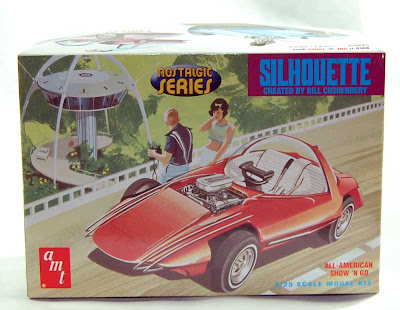 The bubbletop donor kit is the AMT Silhouette #38450. This is a kit that I built at least 3 times as a kid--always liked it. 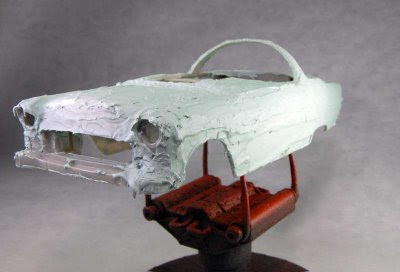 I didn't do the greatest job marrying the plastic together, and there were big holes that I filled with strip styrene and CA glue/baking soda. Next I went against common wisdom--that you should use as little putty as possible--and covered the whole thing with Evercoat Eurosoft. So as you can see, the body is lousy with putty--putty on nearly every surface--putty everywhere. 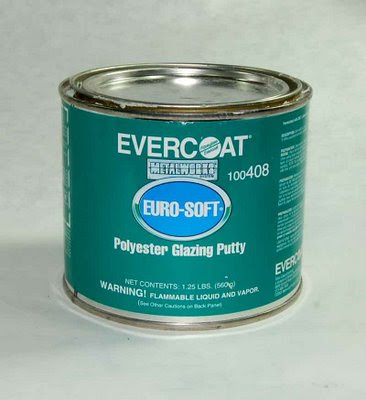 Eurosoft is great stuff for what we do. I think it was made for filling plastic bumpers on 1:1 cars, but it's great heavy-duty putty for scale applications as well: it mixes up fast, dries fast, sticks to plastic like no one's business, and is easily filed and sanded without chipping off.

Next I attacked the putty-laden body with 150 grit sandpaper and a 200 grit Dremel wheel, to get the really big chunks off. Then I sanded using 400 grit wet and dry and the "foam block technique". This left some pits and ruts--using 400 grit on putty seems to usually do this. 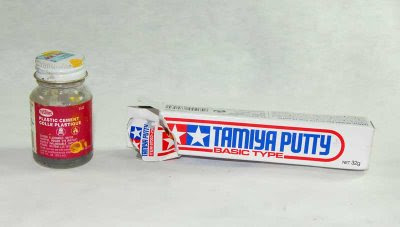 To fill in the ruts I applied Tamiya basic putty and, once on the body, painted over the putty blobs with Testor's liquid cement. Like the Eurosoft putty application, this totally stunk up the house, and I imagine is toxic as all get out, so I wore a respirator when applying this, and you should too, if you ever work with these materials. 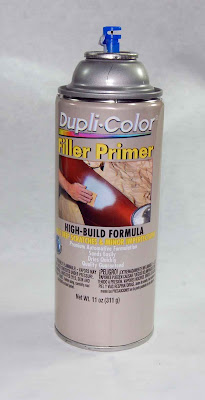 The last secret weapon in this is Duplicolor Filler-Primer. This is sort of like super thin putty you can spray all over the body, filling in minor scratches and whatnot. I wouldn't spray it on a body with details that need to be preserved, but for this sort of project it's perfect. After the putty and liquid cement was sanded out, I put on a heavy coat, to the point where it ran. It's OK, it needs to be sanded anyway. 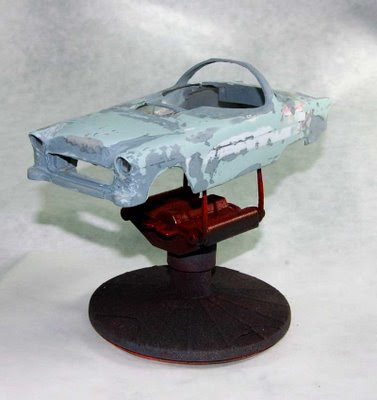 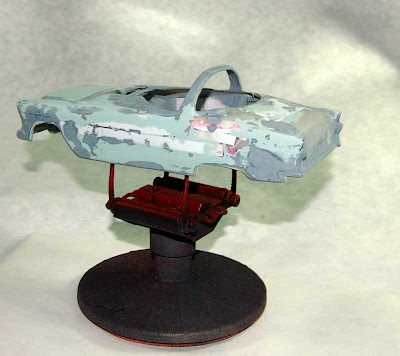 So here's what I have so far. This is after 1 round of Evercoat, 1 round of putty and 1 really thick coat of Duplicolor filler, with plenty of 150 and 400 grit sanding between and after. I have a custom body that's not looking too bad. It's not done obviously, but at this point it looks to me like the body is going to make it to a chassis someday. It was so rough looking after the initial Evercoat application I wasn't sure if it was going to make it this far!

Looking good, Charlie! Very professionally done. And I really like your writing style. Of course I would. I'm your dad! But even if I weren't, I'm very impressed and am enjoying your blog. Much love, -Dad