Time to wrap up the 69 Dodge Charger street racer built out of parts leftover from the Vintage Charger 500 build....It was a race to the finish, but I really wanted to get this build done by the end of the month....and I did. The results came out pretty good....my wife said she liked the blue and gold colors and the stance. The paint finish is a bit ratty again--I rushed through the polish stage in an effort to get this done by the end of the month--but I doubt a 1:1 match racer would have a really mirror finish to it. Overall it was a fun build and did bring back the spirit of the good old days, way back when, building models with my brothers. 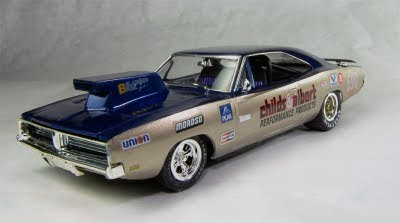 The only tough part finishing this was dealing with the rear wing. It came off a AMT/Ertl 71 Charger. Getting the wing to sit straight and situated correctly on the trunk lid turned out to be more work than I anticipated. The 71 AMT Charger was purchased as a donor for the next build (a vintage 1:25 71 Roadrunner, which I already started). To make matter much worse, wing-wise, I dropped one of my photography lights on the model right before this photo shoot and the wing broke off! So it had to be reattached!

But that's what glue is for right? Anyway this was very quick build--only a few weeks from start to finish--especially considering that the interior and engine compartment was scratch built. And how busy I am doing other non-model-making things right noiw. The alacrity of this build makes up for 6 months of pain and suffering to build the Vintage Charger 500!!! 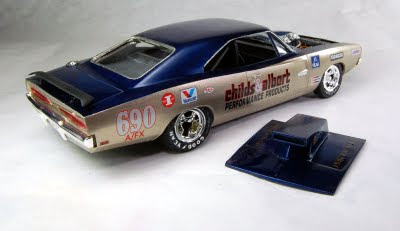 The hood doesn't hinge or come off in a clever way--again something I did to speed up the build. I will probably display this "hood off". More finish problems: some of the decals on the hood rippled up after a week or so of gassing out--maybe some sort of interaction with the Future Floor Polish? But it's not that noticeable. 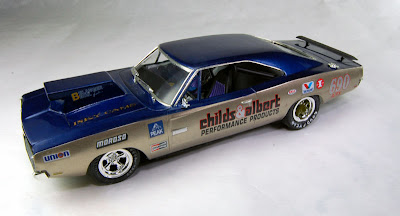 Overall I might not be getting better at custom builds but I am getting faster! 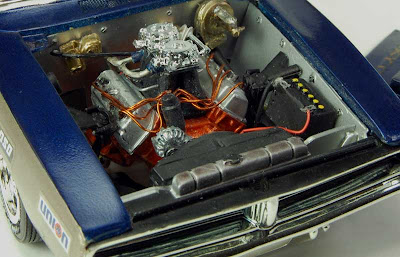 The engine compartment was detailed out with craft wire and very small diameter plastic rod bent into shape. I paid little attention to how realistic things are in terms of 1:1 function. I don't even know what some of the parts I bolted to the firewall are supposed to do, not knowing that much about cars. I just put them on because I thought they'd look good, which is exactly what I did 35 odd years ago. As I see it there's nothing wrong with any of it.

So next is yet another Mopar. A 1:25 Early 70's Roadrunner or GTX seems to be a vintage model kit holy grail of sorts--I see promos going on Ebay for $100!! When is someone going to reissue this bad boy? Anyway I already prepped the body of a 71 Roadrunner (bought on Ebay, yes....) already have some primer on it and have the donor kit open, which I am already pilfering. So I am committed, but am still looking around for other ways to get this next build done.
Posted by Charlie Lamm at 10:25 AM

Again, lookin' really good. Impressive no matter how long it took or didn't take. Engine compartment turned out super, and so did the rest. Plus professional pix and writing, so as always, it's a pleasure to visit your site.