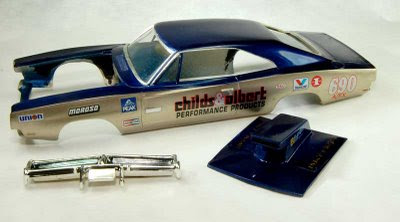 I realized as I was applying the decals from Slixx that it's been almost 35 years, maybe more, since I've applied a lot of decals to a scale model. Growing up we'd put decals on everything we built, and it seemed easy, but now years later it doesn't seem as easy as it was back then. 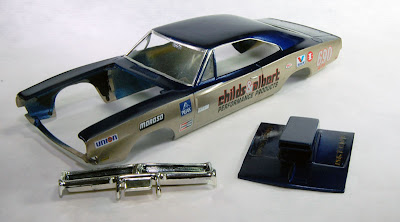 I am not sure why--perhaps I am just pickier now about how it comes out, and maybe that's not the best thing. 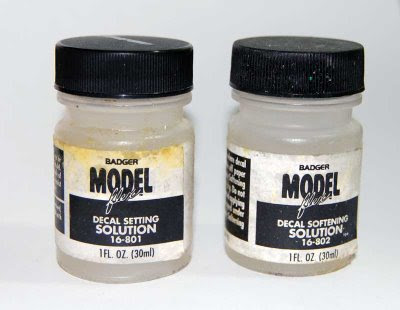 It was helpful to use Badger "Model Flex" Decal Setting Solution and Decal Softening Solution. I discovered these during the 32 Texas Old School Hot Rod build...the first helps the decal stick and the second helps it conform to the tricky curves and whatnot. I found (once again) that's it's dangerous to overdo the application of solset and solsoft--the decals will crack and split. Also a good tip is to apply solset and solsoft alphabetical order--because it's a very bad idea to start with the softener, doing so will pretty much destroy the decal every time; it did for me anyway.

Afraid of melting the decals with lacquer or enamel clearcoats, I once again chose Future Floor Polish ("Pledge with Future Shine") as the clearcoat for this build, so I brushed on in 2 heavy coats 8 hours apart.

A major breakthrough was the clearcoat/solvent relationship between Future and another household product: Windex glass cleaner. Last build I had issues with Future whitening and pooling up in certain tight spaces on the body. On the 69 Charger 500 build I sanded out the Future goo and tried to live with it. It turns out Windex is the perfect solvent to get rid a build of Future clearcoat problems, and it doesn't wreck the lacquer color coats below. So if the Future acrylic goes wrong (dries cloudy, dries white, won't dry no matter what, pools up and looks ugly, and so on) just spray or brush the affected area with Windex, wipe if off with a lint free cloth, let it dry, reapply the Future polish and keep going. I had to redo the "hood scoops" because Future pooled up in them and dried white, so I removed about small section of clearcoat with Windex and reapplied Future just over the area. You could never tell I touched up the clearcoat. If only everything else was like that!
Posted by Charlie Lamm at 7:46 AM