From last time: still working on a 1:25 scale 71 Roadrunner. This is a "vintage" kit that hasn't been released in many years, making parts hard to find.... 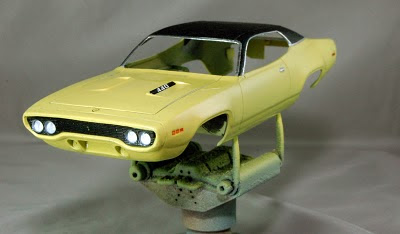 It's time to polish up the body--after applying 4 coats of Future Floor Polish (actually just an acrylic clear sealer) I let things dry for about a week--I've been busy with work and haven't had much time at the bench anyway..... 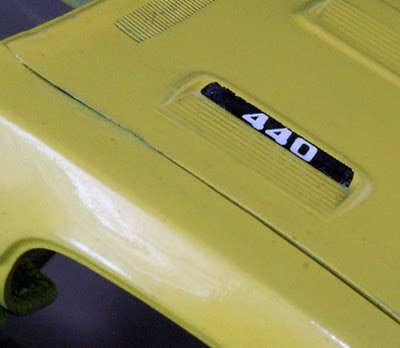 As I mentioned last time, there are issues where the hood (which doesn't lift or come off) joins the body. From previous builds I know that little problems become big problems after polish and finish are applied....for some reason I thought I could get away with the subtle issues, but no, once again, it wasn't meant to be. The roughness around this part of the hood looks pretty bad, and I have to think about what if anything I am going to do about it--if anything can be done. Stripping and repainting at this point is out of the question. The lesson learned is that prep work (Careful! prep work) has to be done before the color coat. Once you get to this stage, you're committed, and have to live with how things come out. 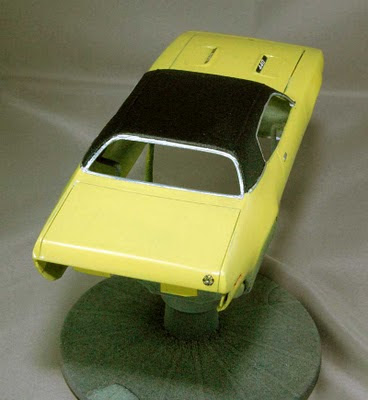 From the rear end, things don't look quite as bad, although I did have some issues with the primer (gray) showing through a bit, especially noticable on the trunk. Next time I paint something a light color I have to remember to use a white primer!!!! The bare metal foil trim job isn't the best either, but it's going to have to do. 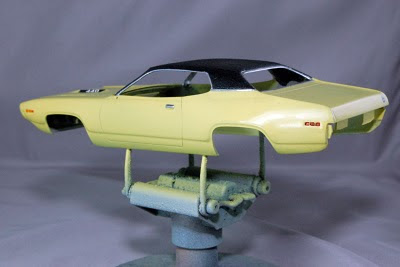 After I took these pictures I removed the Bare Metal Foil from the drivers side A-pillar; while I was polishing the roof "caved in" and bent up the foil. Perhaps in the future I need to support the roof during polishing, but in most builds I don't think a roof will cave in. 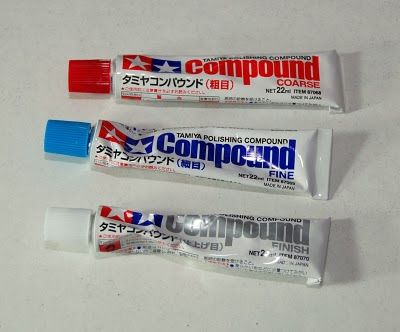 My general finishing process: a) Future Floor Polish; 3-4 coats. The clear finish starts to shine a lot better after the 3rd coat or so. b) 2000 grit automotive sandpaper. I was very careful to not remove any paint, but here and there (around the hood especially) I did. Damn! c) Tamiya "fine" and "finish" polish d) Novus 3,2,1 plastic polish and clean. 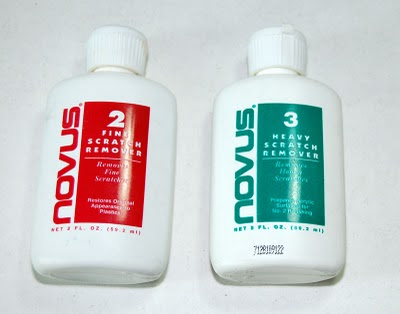 In general, I never spend that much time on polish and finish, and it shows. Unless I quit my job and give up other interests, it's just not going to happen. For the amount of time I've spent so far, the build is coming out OK, but it will never look perfect. Perfection takes time. That's true of a lot of things, and that's true about model building.
Posted by Charlie Lamm at 9:03 AM

Its really very wide description about car maintenance issues and what kind of problem appear after car polish. I appreciate with your information.

Note quite sure what you mean, but, my polish setup has changed a lot since I wrote this entry.

a)sand down primer and color coat with 2K wet and dry first--you can't fix issues with color coat during polish as far as I can tell.

b) Use 2 part clear. It's much easier to deal with, polish wise, than any others I've tried, and I've tried lots of others.

If you jump to more recent blog posts you can see some entries about 2 part clear. Overall, the above process yields better results without making you take forever polishing.