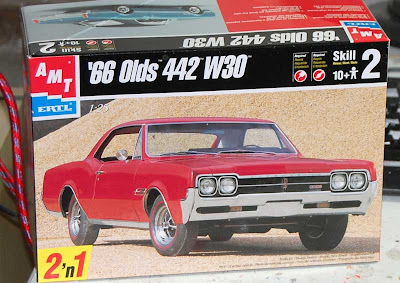 My dad read the last Blog Entry and was saying hey--the Roadrunner doesn't look all that bad! Well....I'm glad he thinks so--but remember, I took a lot of pictures of the thing, and uploaded only those that showed the build in a favorable light! I don't retouch my photos, but I also don't want to zoom in on all the little flaws....

ANYWAY let's hope the next build isn't as much of a struggle. It's a 66 Olds, one of my favorite 1:1 cars, I figure I will build it as a mild custom. What have I learned? For one, plan ahead, plan ahead, test fit, and then plan some more. I have to go back to the book by the greatest modeler of all time, Gerald Wingrove, to realize that the really good builders (no matter what they are building) figure out things first, then build, then paint/polish/finish. Since I like painting and paints, I have never done as much planning and test fitting as I should, I just slap stuff together and start painting. And then I always have the same issues: 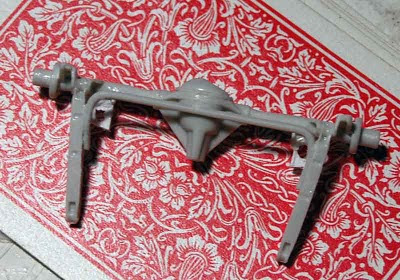 This is a "modern tooling" kit, which means the detail is much better than a few of the "vintage" builds I have tried lately. The back end can easily be seen to be way better in the detail department than anything on the Roadrunner build. 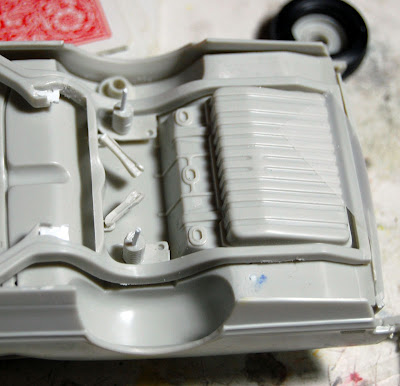 So this time I'm doing more test fitting and planning in advance of any sort of finishing--for instance, on this kit the rear end looked too high to me, so I am doing all the hacking and cutting and fitting to the rear end first.... 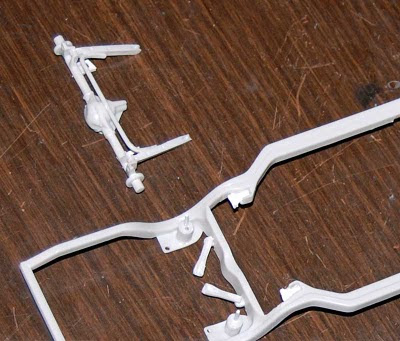 And "pinning" things parts so I can see where I am at....

And here's the stance. The back end is pinned in, and the front suspension is assembled. I am going to cheat on the finished build by gluing the bottom of the front "axle" (really, a nub of plastic) to the bottom of the inner front wheels. No one will notice on the finished build....It's got a long way to go, but at least it's pointed in the right direction.
Posted by Charlie Lamm at 8:30 PM