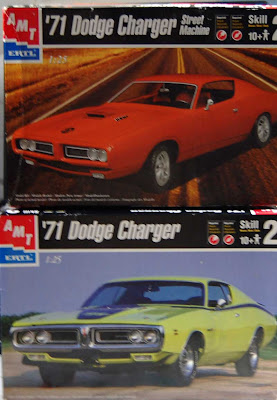 What happened to August? For that matter what happened to September? Time hurries on....I wanted to do something different for paint on the 66 Olds build, so I am trying to use a different undercoat, and some transparent acrylics over them. Instead of just using plastic spoons or whatever, I thought I'd use the bodies left over from the 71 RoadRunner build. 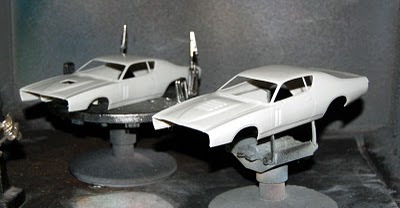 I used Plastikote primer and after 24 hours sprayed on a single coat of Krylon Real Gold Metallic. The paint covers very well and covering with a single coat was no problem. 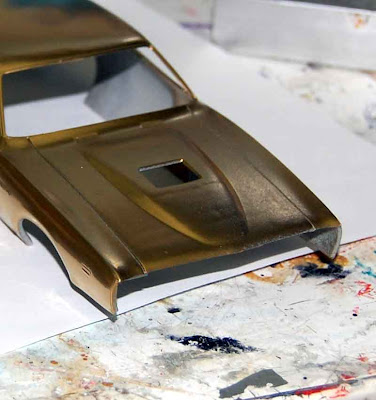 One of the unexpected results was that this gold paint shows up defects in the body like no one's bizness--like this huge sink mark on the hood of one of the bodies. It was interesing that many of the sink marks--and there were lots of them--existed in exactly the same place on both bodies. I guess there was a problem in the molding process, and no one cared enough to fix it....glad I'm not using these bodies "for real" because filling in all the sink marks would be a pain. 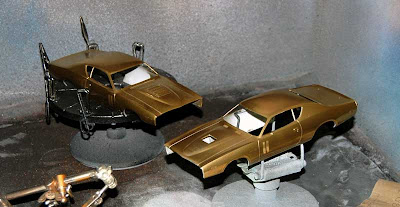 Overall the bodies are looking like they're ready for a color coat. I have a feeling that some masking/candies and then some metal flake sprayed over is going to look really good, assuming it spreads out OK and doesn't peel. I really have no idea what will happen.

Next time: and hopefully sooner than this time: some transparent coatings--see if we can do a multicolor "candy" finish.
Posted by Charlie Lamm at 6:02 PM

Charlie,
Thanks so much for the awesome tips!! Here is these pictures you have the body sitting on what looks to be the ultimate paint jig. Did you buys this or make it, I gotta have one, and I cant find it anywhere also I dont know what to call it! LOL
Thanks again
Jason