I can't believe another month has gone by! Here we are again--after Thanksgiving already. Where does the time go?

From last time: still working on a 66 Olds, with an emphasis on a "clean build"--something that doesn't come easily to me! 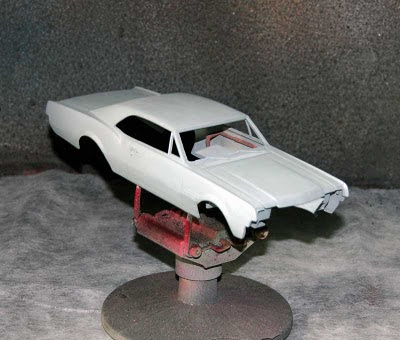 This morning the body was still in primer (I've taken to using Plastikote T-235 Gray--seems to orange peel less than Duplicolor's similar product). If you've followed previous posts, the '66 Olds kit (AMT/Ertl 6268) was mastered with trim for a vinyl top. I used vinyl on the last two builds--and didn't much like the way either came out. So, off with the vinyl trim. But, it turns out, it was a lot (I mean, a LOT!!) of work to grind and sand away the large trim strips that run the length of the body. After weeks of sanding and finishing I figured the body work was as good as I could get it.

And: with a brief break in the rainy weather I figured it was finally time to apply the color coat to the body. 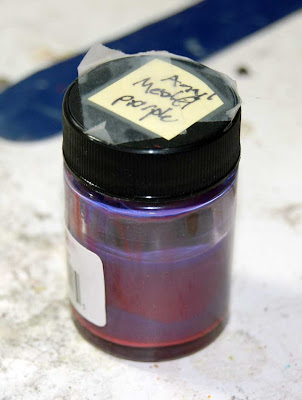 But what kind of paint? I've tried different paints over the past couple of years--enamels, acrylics, and lacquers, mostly, trying to figure out what works best.

After returning to the hobby after a 35 year absence, I started out using enamel--that's what I used growing up. Turns out enamel takes a long time to dry and is intolerent of when follow up coats are applied (you have to apply second costs right away, or wait about a week--if you don't, you end up with paint that never really dries).

On the plus side, enamel is the defacto hobby paint for plastics(still), self-levels, has little or no orange peel issues to deal with, is easy to polish, and with patience, can come out looking great.

Next up: lacquer. I tried a fair amount of lacquer finishes, but dealing with the fogging and orange peel associated with lacquer, and after enduring some catastophic failures due to bad primer, I have decided perhaps it's not worth the trouble.

This said, I have settled (I think) on acrylic, and specially, acrylic paints by Jacquard....Jacquard may be what I use from here on out--best to just know one thing well, maybe. I have written about Jacquard before, but to reiterate, as a craft paint it has a lot going for it: it's easy to mix, easy to airbrush, a breeze to thin, cleans up quickly, sticks to almost any primer, and best of all, is non-toxic and doesn't stink up the house. Just the fact that it's not poisonous makes Jacquard acrylic get my vote going forward. 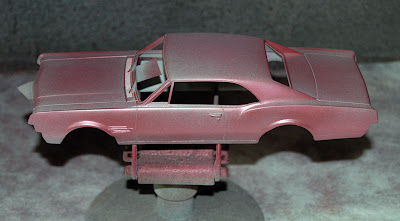 I had some Jacquard purple I mixed up a few months ago but never used--so I used that....first up, a the mist coat. It took about 30 seconds for this to dry. 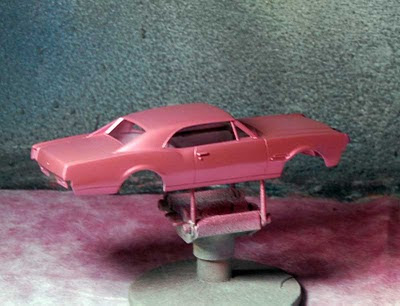 After the first color coat, things are already looking OK....to me, a notable thing about Jacquard is that a Jacquard color coat looks radically different depending on the light that hits it. 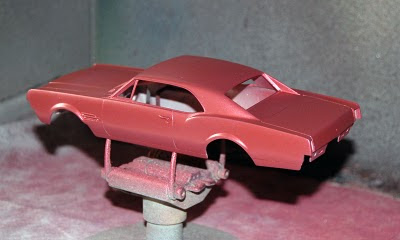 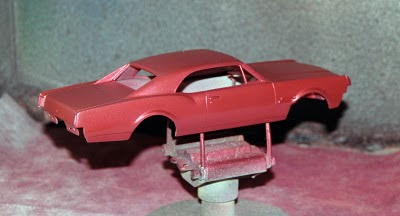 After the second color coat, in very bright light the Olds looks red/pink/copper. I didn't much like this at first--it seems too feminine for an old muscle car like this, but it's grown on me. 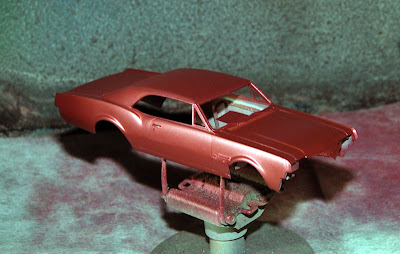 In low light the 66 Olds looks downright purple/maroon, and looks great. OK, Jacquard it is, from here on out. Will I miss out on some other great paints? Maybe, but, at least my wife isn't yelling at me for stinking up the house!

I really like that color. Your pictures are really great, and the 1965-66 Olds was one of my favorites when it came out.

Nice job, and I can't wait to see the interior.