One of the toughest things I've grappled with, since coming back to this silly hobby, is how to apply clearcoat to a finished color coat and get professional results. In the old days, we'd just spritz some Testors Enamel Clear over whatever we were working on and hey, we were done. For better or worse, I am setting my sites a bit higher now.... 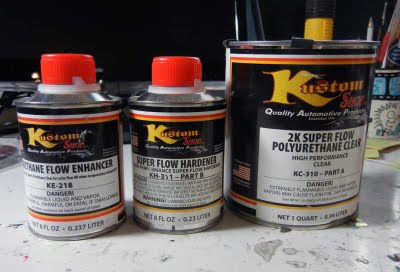 Reading the hobby mags, the clearcoat of choice (for model cars as well as some 1:1 cars) is Two Part Polyurethane. "Two Part" because the paint consists of a clearcoat and hardener--you have to mix the two right before use. 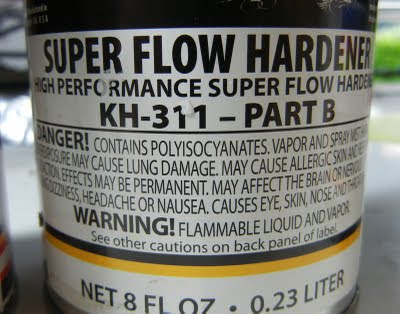 However there's a catch! Polyurethanes are extremely toxic before they have gassed out, especially for folks with lung problems (I have had asthma my entire life, so I would consider myself someone with "lung problems".....)

If I am going to experiment with Two part clear, I'd better be careful! 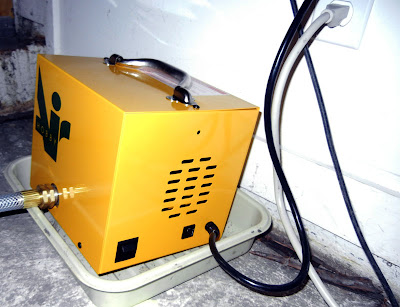 First thing I did was buy a forced-air system. These are mandatory at pro paint shops, and can cost thousands of dollars; fortunately scaled-down versions ($400 US or so) are available for small-potato painters like me.....I chose an Axis Air "Hobby Air" system as it seemed to be the most popular one out there.

You put a little yellow box--basically a small compressor--by a source of clear air. You make sure the air from the paint room is isolated from the air pushed from the "Hobby Air" device. The compressor forces the clean air down a 40 foot hose to a breathing mask. In addition to this mask, you have to wear a hood and latex gloves--you don't want the clear to get on your skin! 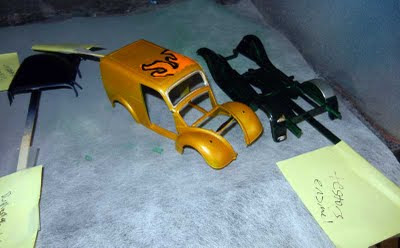 OK, with safety precautions taken care of, next thing I wanted to do is make sure two part clear didn't "eat" the color coat--no point in having a great shine if the color coat gets ruined!

To test, I got some body scraps out of the junk box and painted each with different paints I commonly use--here, it's Testors one coat lacquer with a quick and extremely ugly test-flame of some testors enamel and Tamiya acrylic. I would **never** try using lacquer clear over this as the ugly acrylic flame would be destroyed--come to think of it, maybe that wouldn't be such a bad thing..... 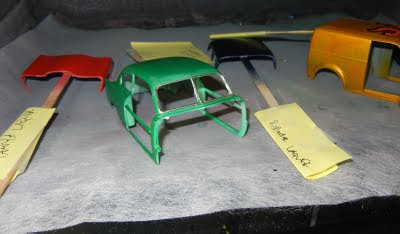 For these tests: no primer, no sanding, nothing fancy--this is not for show.

I then mixed up a 4:1 ratio of clear to hardener and shot it out my trusty Paasche H0708 single action el-cheapo airbrush. The results were fantastic, and, incredible! 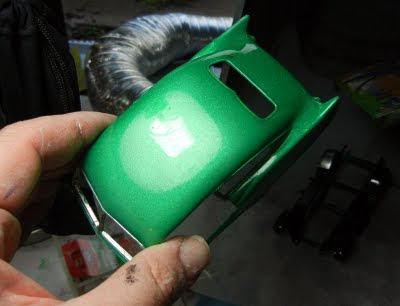 So: does polyurethane clear eat water based acrylics for lunch? Good news is, if there was a problem, I didn't see it. As they said on SNL--great taste--and look at that shine! 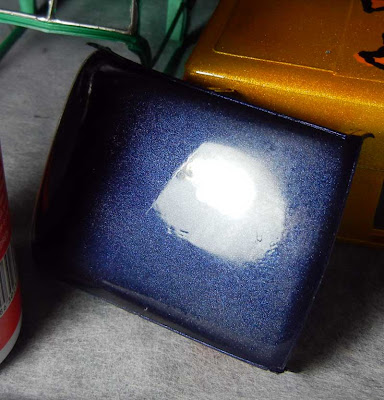 Lacquer--duplicolor here--same thing! I spent about 2 minutes polishing this one and it looks um--OK.... With some more work, both in prep and in finishing, it would have been (could have been?) perfect! 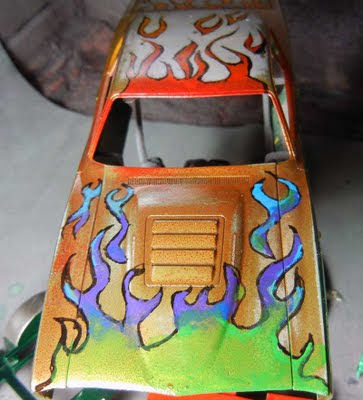 In fact I had so much luck with this stuff that I thought I'd try to "clear" something REALLY tough. I had an old body lying around that on which I was practicing painting flames by hand. I don't remember all the different paints I used during my practice sessions, but I think it has pretty much everything I own, including metalizing lacquers, transparent enamels, water based acrylics, acrylic/enamel hybrids, you name it, it's there. So I sprayed a few coats on there, sure that at least some of the paints would fade, welt, weep, or otherwise dislike the clearcoat. In the end, I didn't have a single problem with color coats and detail paints being destroyed--any of them!

So to sum it up--two part clear requires a lot of safety precautions but it's worth it! I made separate "test units" for Jacquard acylic, Testors lacquer and enamel, Tamiya acrylic and enamel, Duplicolor lacquer, as well as a motley hippy flame job consisting of everything I had lying around, and the clear coat played nice with all of it!

I think for my hobbies, 2 part clear will "change things". I won't treat clear coating any craft materials--model cars or otherwise--the same again!
Posted by Charlie Lamm at 1:59 PM

I think you're very daring, and you do always want to tackle something challenging, but I hope you'll be super careful, because this stuff can be dangerous.

Not sure respondents should say "I love you" on blogs like this, but what the hell. I do.