Back at the bench!!! I am still working on a 1:25 scale 1951 Channeled Chevy, based on AMT's AMT-608 kit. The good news: the body and paint are pretty much done. There wasn't any "customizing" for this build as far as the body; but, there were lots of sink marks, casting imperfections, mold seams, and other gremlins had to be removed/filled/fixed before paint....after these fixes, the body was shot with Duplicolor white primer and sanded lightly (!) with 2000 grit wet n' dry. 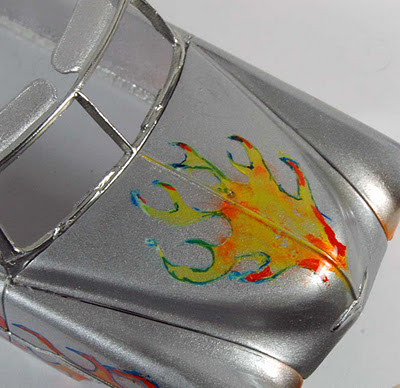 For color I used decanted Duplicolor metalflake silver, with extra Jacquard PearlEX silver flakes thrown in (anyone who has read this blog to date knows I LOVE Jacquard paints!) I sprayed the mixture with a Iwata SAR single action airbrush which replaced my single action external Paasche--it was time to move up! This was my first attempt at decanting lacquer; I will cover it in more detail in later posts. To make a long story short(er), decanting lacquer, then airbrushing, yields a much smoother finish (for me anyway), versus just spraying out of the rattle can. 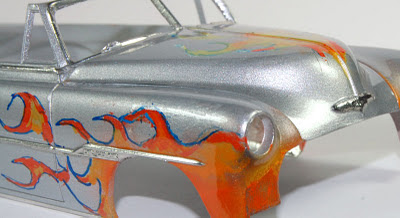 What about the flames? The hood was masked with a hand-cut frisket. With limited time to devote to this hobby, frisket cutting by hand doesn't work for me--I simply don't have the hours to cut the tiny patterns--so I am considering using some sort of computerized frisket cutting for future projects. The sides were entirely hand flamed using different acrylics--lame excuse, but I ran out of time to cut a mask for this! I like the hood flames much better than the sides; the side flames look sloppy but also bright and happy. The oranges and yellows were applied either by hand or with an Iwata Micron-C. Finally, after a quick sanding with 2000 grit paper, all was coated with HOK Kustom two-part Polyester clear, as far as the clear, I was extremely happy with the results; this was followed by the requisite Bare Metal Foil. The AMT 51 Chevy kit comes with a cool straight-6, but for me it wasn't right for this build. So: I scrounged around in my parts box for a small block V8. Since this is a channeled build, like a 1:1 chaneled car, there isn't much room under the hood. During mock up, this engine just barely fit! I have no idea what kit this came out of--it's AMT something I think, at scale, probably too small to even be a 280 c.i. ish engine--maybe out of a 55ish AMT Chevy? 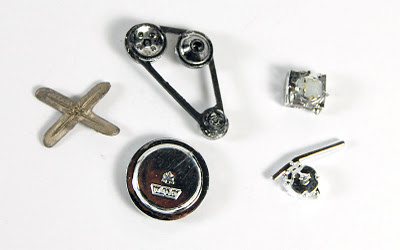 To finish the other engine parts I used Alclad II, and tried something new: spraying one color of Alclad and then, to get some variety, gradually mixed other Alclad colors into the airbrush's hopper. It worked great--Alclad can indeed be mixed, and the results are really nice. I started with chrome; mixed in some stainless steel for the belt assembly, and finally some pale gold for the fan. Variety under the hood is always nice! 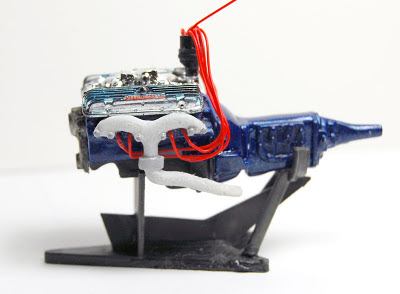 The block was painted with Testors One-Coat metalflake blue and then hit with 2 part clear. I was curious if 2 part clear can be detailed after application with acrylics, and it seemed that it can--the advantage being that any detailing "painting mistakes" can be easily cleaned up with Windex without anyone being the wiser.....the Windex takes off the acryic but leaves the 2 part clear and color coat beneath untouched! Another victory over sloppy paint!
Posted by Charlie Lamm at 8:55 AM