51 Channeled Chevy--Engine is finally in....

I haven't blogged much but I have been building! I thought assembling the rest of the Channeled 51 Chevy would be easy but it's not been...I have fought almost every part to get it glued into place! 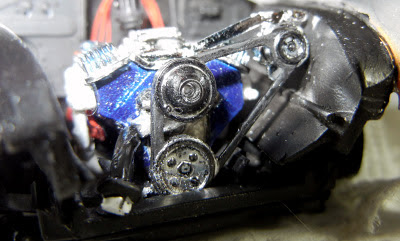 The engine compartment was smaller than "stock" due to the channeling and I didn't know if anything other than the block would fit! To make things even more challenging, I am using a parts-box V8 instead of the kit supplied straight 6. I did a pretty good job customizing the frame and engine compartment to accept the larger block, but didn't plan for anything else under the hood. Thus I decided to build most of the engine with the block already mounted inside the engine compartment which of course isn't the way a sane person would do this. 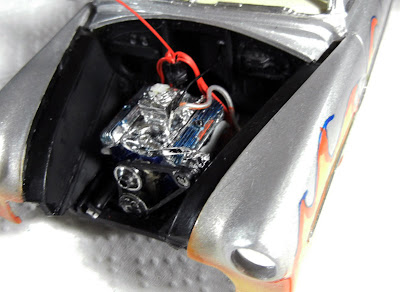 Fuel lines and some plumbing are already in place, but I have along way to go! 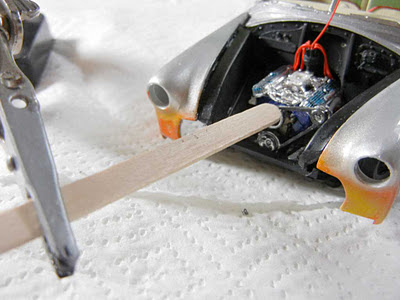 Lo and behold--the fanbelt/pulley assembly didn't fit quite right, so I had to do some minor surgery and then use this contraption to hold it all in place while the glue set. 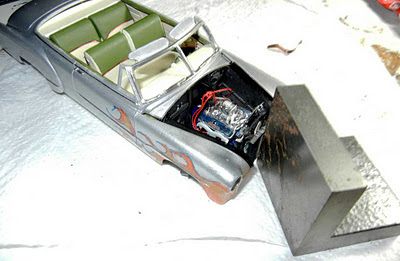 Same thing with the radiator--I didn't do the best job "engineering" that fit before paint and assembly, and the channeling meant I had to be pretty accurate or nothing else would fit. So I had to do some trimming and repainting, and then hold the radiator in place with a weight while the glue dried. 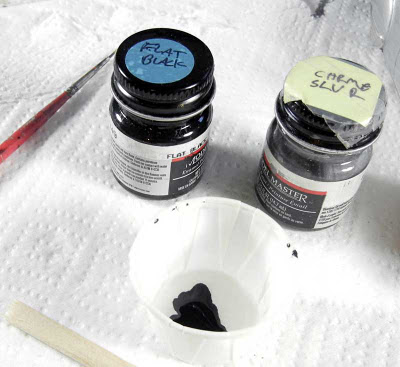 Speaking of paint....I have rethought how I apply brush paint....I used to dip brushes directly into bottles but no more. Now, I always stir the paint with a craft stick and then use the stick to transfer the paint to a small cup (like, the little paper ones you get at a burger place for ketchup). Less paint clumps and brush streaks that way. 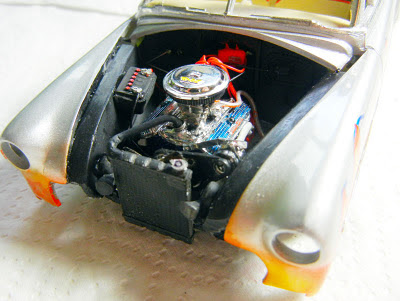 The engine compartment is finished! I feel like I can knock the rest out in a day or two but that's what I said before; it took 3 weeks (off an on, more off than on) to assemble the interior and engine....so who knows.
Posted by Charlie Lamm at 2:18 PM