51 Channeled Chevy--Finished--The Good, the Bad, and the Fugly! 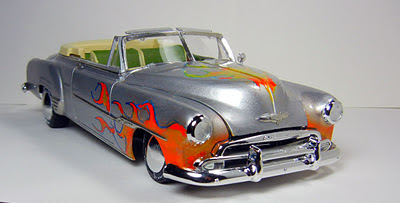 Free at last!--the 51 Channeled Chevy is done....some of it came out OK, some pretty bad, and some just downright fugly..... 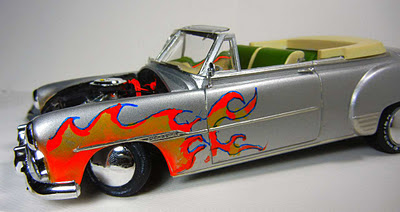 What came out not so good--the hand painted flames on the side. I'm not going to try to do that again...from certain angles it looks OK but for the most part it looks sloppy and unprofessional. I give the handpainted flames a C-! If I had used masks (like on the hood) it would have looked much better. 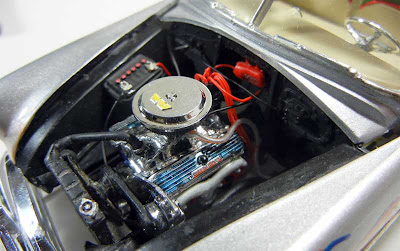 I give the engine compartment a solid B (?) or not-so-solid B/B-? Maybe this was beyond my abilites, because cramming such a large engine into a small compartment was akin to building a tricky jigsaw puzzle! It's hard to believe that because I was too lazy to figure out how things would fit during the early stages of this, I basically built the engine up inside the finished engine compartment. Doh! 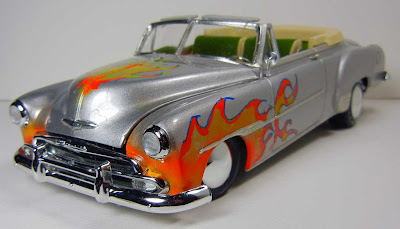 The fugly would be the stance. In Pat Ganahl's seminal book "The American Custom Car", he talks about the history of custom car stance--specifically hot rods are raked; customs, low front and rear, or even low rear and high front. So my build is a custom with a hot rod rake. To me, this doesn't really work. The build would have looked better if I had given the whole thing a more traditional "lead sled" low look, or, made it more of a hot rod as far as paint and trim (sponsor decals, dechromed, hood scoop, rear slicks, whatever). 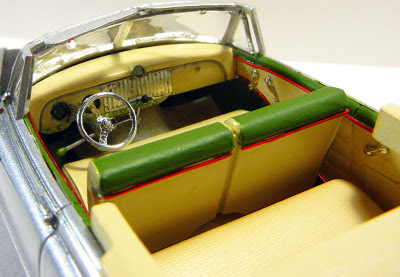 The good is the interior. This is my best interior work to date, and the color scheme--ivory and flat green, with red trim, works well. 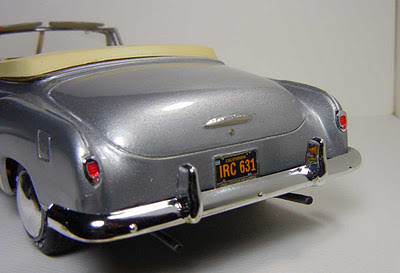 Overall--hey, it's done, on to other things. Thank goodness!
Posted by Charlie Lamm at 4:05 PM

The seats look like the seat covers Sears sold through their catalog in the fifties.