Finishing Up the Quick Carpet Interior

Another Saturday.....rainy day, good for working in the basement but bad for letting models dry......

A couple of blog entries back I went over using "Softflock" and acrylic hobby paint as a quick substitute for more time consuming carpeting things like "Kens Fuzzy Fur" or using the Carpeting Fuzz Stuff from Testor's. This week I finished up the interior that I used as a test bed for the quickee-carpet experiments. 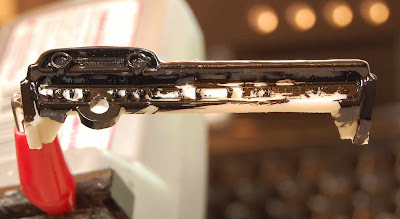 I started by painting the dash with Tamiya Black #X-1. After this first coat was dry I covered the top part (the one that will show through the windshield) with liquid mask from MicroMark because every time I do this invariably I scratch or get some goo on the top of the dash, and this time I wanted to avoid it. I removed it for the final picture but will apply it again before the final assembly. 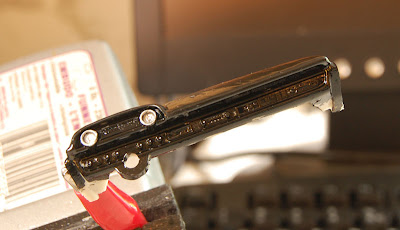 Next I painted the big dials with Tamiya chrome silver. Then once that was dry I painted the inside of the dials with Tamiya Clear Yellow #X-24. Now, I can't tell you how much like using Tamiya acrylics for dials. It looks realistic right from the get go and is easy to use--just dobble a bit of paint into the center part the dial (maybe thinned with a bit of alcohol) and you're done.

OK, here is the finished interior. Click the pix for a bigger view. 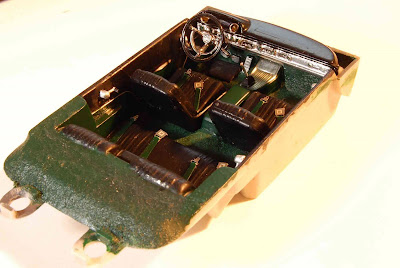 I put some baremetal foil on the lower part of the dash, and painted with a small brush the dials and knobs and whatnot, black or forest green.

The seatbelt buckles came from a photoetch set from Model Car Garage. I used masking tape painted forest green for the "belts". I think I've seen this masking-tape seatbelt technique detailed elsewhere on the web, if I can find it I will post a link later, if not I will post how I did it.

The steering wheel is Testors 1247 Gloss Black covered with Alclad II chrome. I then painted the rim of the wheel with Tamiya semi gloss black X-18 The turn signal knob and lever was scratch built out of some styrene rod--I drilled a hole in the side of the column and glued the lever in there before painting. I am not sure the original car had this (it's a 63 ford) but it looked a bit bare without it so there you go.

I really wanted to use this week to experiment with "dy brushing". I read about this on airplane and train model sites--the idea is that you tap almost all the paint out a brush and then run it over the raised surfaces of your dashboard (or whatever) over and over and only the raised stuff retains the paint. Well, I have never been able to get good results with this. After a few botched attempts I gave up using a brush for the fine detail work on the speedometer part of the dash. To paint the "dial" on the main part of the dash I got some Tamiya flat white acrylic, put it on the end of a sharp toothpick, and let it dry until it was tacky. I then lightly brushed it over the raised surface between the 2 silver/amber gauges. It didn't come out perfectly but it was good enough. I guess this is sort of dry brushing in a way without the brush.

So I am working on a candy finish for the body for this (it's going to be curbside) so maybe next time I can get that done and talk about it.
Posted by Charlie Lamm at 9:17 AM