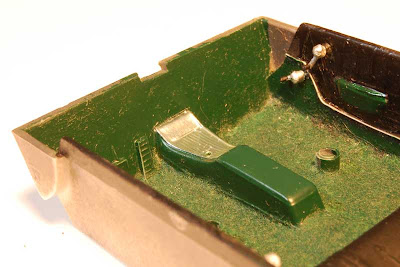 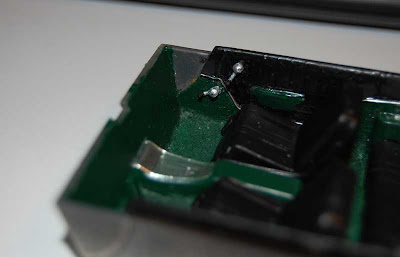 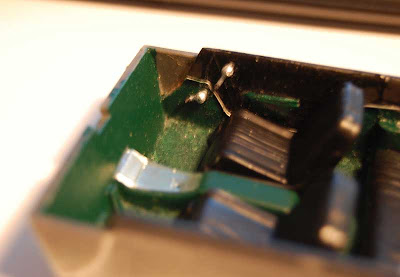 As you probably know, modeling can lead to many other interests. It certainly has for me. My latest cross-pollination is photography. That's the topic of this week's entry: photography as it pertains to this oddball hobby we have chosen.

There are about a zillion internet pages about photography. For my own edification as much as anyone elses' I will reiterate some of the most basic ideas for photographing models and other similar objects, as I understand them.

First let's talk about a camera's lens. It seems strange to me that light can be "bent" but that's how a lens works. I can dunk a pencil straight down into clear water in the sink it seems to bend as I slowly shove it under the surface, so obviously bending light must be possible. A correctly made lens bends the light on one side to come to a point of convergence on the other side. The distance between the lens and this point of convergence is called the lens' "focal length".

For any PHD ("push here, dummy") camera, the camera senses its environment, adjusts the focal length with a little motor, and the aperature (equivalent to the iris in your eyeball) with another little motor, and the shutter speed with a third little motor (well, a spring, or something like this). If you're taking pictures of your cat, it's remarkable how good most of these "auto everything" pictures come out--most of them are in focus and the light and shadows look remarkably natural.

The biggest issue for me was "depth of field"--I could muck around with lights or shoot outside at noon or whatever, but no matter what, I could not get the front of the model and back both in focus at the same time!

After some digging around and conversations with some serious photographers, I found that to solve this issue I needed to set a high "F-stop"--say 18 or 22, and then have the camera control the shutter speed for me. With my Nikon D40 that means putting the camera into "A" as opposed to "Auto" mode, then manually adjust the f stop to 18; in Auto-everything mode the camera was stuck at about F 5 or so, no matter what I did.

F stop is a ratio between the aperture size and focal length, and the high F stop forces the aperature of the camera's lens to be tiny, and thus the shutter has to open up a lot longer to let in the right amount of light....that means a tripod is necessary, because it's impossible to hold the camera completely steady while the shutter takes its sweet time opening and closing.

OK so this high-F stop setting combined with a good tripod seems to have solved the depth of field issue.

Then I had to get the "right type of light" on the subject. I had horrible issues with things being too dark, too yellow, scale motors casting shadows that looked like a headstone at sunset, and so on. Some better lighting was in order. I read a lot of suggestions about buying this or that el cheapo 300W grow light from the hydroponics store, and trying this or that setting on my camera, but for me none of them looked very good, so in the end I sprung for an expensive Nikon SB-800 uber-flash. It could be moved off the camera (which I found helped fix some of the "bad shadow" issues) and worked seamlessly with my Nikon D40 without a lot of mucking around.

Third problem: could never get many close-up shots into focus--at all--no matter what. I don't know why, exactly, but the SB-800 off camera light seemed to have solved that problem as well. I think the camera was trying to find a focal length vs. aperature setting vs. shutter speed, and if the light was bad it couldn't bring enough into the camera, so the camera essentially said "the heck with it, I'm not taking this picture". I'd hit the button and nothing would happen! Good news is that I have not had this issue since I got the 800 uber flash.

OK, with the new flash, the tripod, and a tiny bit more knowledge of how to use my camera, the result is photos like the top one I show at the beginning of this post. Compare the focus and lighting of the top one (with the SB800 about a foot from the interior tub, a cheap diffusor on the flash, an Fstop of 18, and the camera in "A" mode) to the bottom two (which are "auto everything" and use the D40's built in flash). The bottom two have serious lighting and depth of field issues. Yes, it's a different camera angle, because on auto-everything mode my D40 Nikon patently refused to take the picture you see on top!

I know the top photo isn't the end-all, ready to go into the Smithsonian etc etc., but believe me, the pictures I take now are a heck of a lot better than what I was doing before. Now the biggest problem is that I can see every little dust speck and snot bit and booger on the subject I am photographing. Before my focus wasn't as good so I could get away with being a lot sloppier. I guess a lens brush, to brush off the dreck on the model before I photograph it, is next. It will also make me into a much more careful/anal retentive modeler, I figure, which may or may not be a good thing.
Posted by Charlie Lamm at 8:53 AM