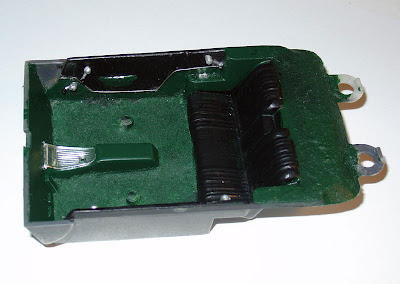 Another week, another few hours in the basement trying to get rid of the stress of a stupid job and the rest of life's BS's. So here is the result of this week's effort--some more work on the "quickee carpet" technique I was messing with last time (see description below--last time's post).

The overall look of the carpet was too light so I took coats of Tamiya Green and combined it with about 1/2 alcohol and brushed it on. The quickee carpet takes paint just fine and you can see that now the carpet's several shades darker. I found that the extra paint seemed to make the carpet more "stiff" but it still looks pretty good.

Behind the rear seats I tried something new. I took some Testors liquid Glue, brushed it on the plastic directly, dropped a few fingers of softflock on (the link again: Soft Flock link here. Tapped it to knock of the stuff that didn't sitck. Then let it dry for about 10 minutes and painted right on it. The result (I was hoping for an even quicker quickee carpet) looks more to me like some sort of stone finish then carpet. Might be good for model trains, but not the best here. It might work for quickee carpet where you can barely see what's there--say, between the front and back seat of a 1/25 scale sedan. Anyway, it was worth trying. I give it a solid C+.

I did a few more things to the interior, which is still far from being done. For one, I tried to put some Bare Metal Foil over the left back seat and paint it black. I wanted to see if it changed the look of the seat any (more like Leather? Vinyl? I guess I didn't know what I was looking for--it was an experiment). Turns out you can barely see any difference at all, and it's not worth the trouble, probably.

Also I scratch built some window cranks just to see if I could do it. I read up on that technique on the "Italian Horses" site, which has a lot of good stuff. Link is here. I didn't spend as much time as I should of as the tops of the cranks aren't as round as they should be, but, this was more about practice then making it perfect at point. I did find that I need to be very careful about making the underside of the cranks completely flat or they won't look right when they're glued to the interior.

Also I tried to put some metal bus wire between the green and black sections of the interior. It didn't come out perfectly but I have a feeling with seats in there etc. it will look fine. There is also the requisite bare metal foil here and then which I still need to clean up a bit. Overall though it's been a fun week messing around with this interior.

Next time I'm going to work on the dash. I have tried (and failed many times) to do the dry brushing thing but let's see if I can get it together.
Posted by Charlie Lamm at 8:37 AM