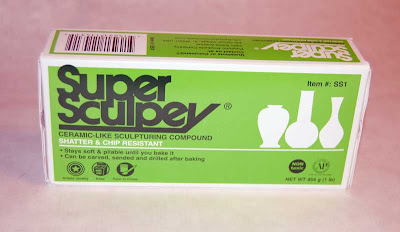 In my research to learn more about the wonderful paints made by Jacquard I found that there is a huge internet culture centered around this stuff called "polymer clay". Apparently artists who buy Jacquard products use it to paint their polymer clay creations.

I haven't read a lot about integrating Sculpey into model car making, but based on how easy it sounded to use, I figure it's being done, and I thought I'd give it a shot.

There are lots of manufacturers out there making polymer clay, but a leader of this burgeoning industry seems to be the folks who make something called "Super Sculpey". That's the product name I kept coming across over and over from people who make jewelry, dance figurines, movie models, military figures and the like.

I bought a hunk from the Polymer Clay Superstore (I liked the name). Super Sculpey comes in a pretty big hunk. Apparently (so far for me anyway) you can store it at room temperature and it won't dry out. It "fires" at 275 degrees, so you don't need a 1500 degree or whatever kiln. It's non toxic (I didn't detect any bad smell or nastiness while working with it, but I wouldn't eat it). But what really caught my eye is that you can sand and drill the stuff--even thin sheets--without it cracking or splitting. Now, that sounds like something I can use. 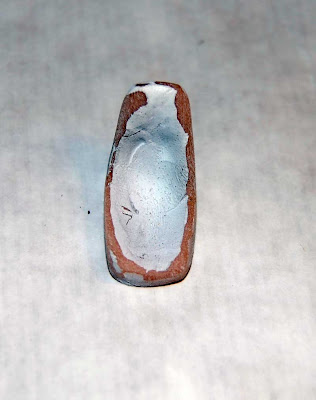 My first creation was a racing seat. It was really pretty easy to make, and I have no experience with sculpture of any kind. And sure enough I could sand and file it and it held up just fine. What you see here is unpainted but otherwise ready to go. I primed it with Duplicolor primer/sealer and the primer sealed the clay right up; the instructions that came with the clay said to use acrylic hobby paint and I guess the Duplicolor was close enough.

The real problems began when I realized I had to make things bilaterally symmetrical, or at make a mirror image of one object from the other. So for instance I tried to make another "mirror image" of the seat you see here so I could use them side by side. Guess what--it was impossible, for me anyway, with my non-existent sculpting skills.

I guess I could make guides, as the car designers do when creating "old school" mockups of car bodies using clay. Then use these guides to make sure the "sister seat" was a close mirror match to the original. But it seems that would be pretty tricky on such a small scale. So for now this seat is a one of a kind. It could be cast, I guess, but that doesn't help with "mirror image" creations which is something you frequently find on a car. 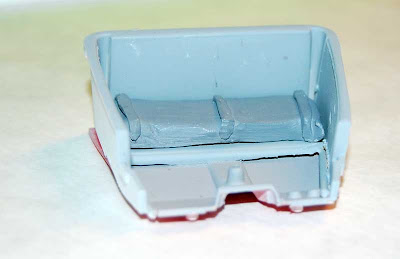 I did end up making a bolster of sorts for the 37 pickup, and no, it's not bilaterally symmetrical, but it's good enough (I figure no one will be able to notice the seat is about 2 scale inches higher on the passenger side; heck, no one every really looks inside my models at their interiors anyway.) It came out OK, and would have been a whole lot of work to make out of a plastic sheet or brass.

I think polymer clay is really interesting stuff, and I can see why there is a giant Internet culture of artists and hobbyists who go gaa-gaa over the stuff. Sculpey has all sorts of other interesting products, including an interesting looking mold system Now, there has to be a use for that somewhere in the model car world.
Posted by Charlie Lamm at 1:21 PM