I've been out of town past couple of weeks which means no time at the bench. I thought maybe some time away would give me a fresh perspective on things but it doesn't seem to be that way. 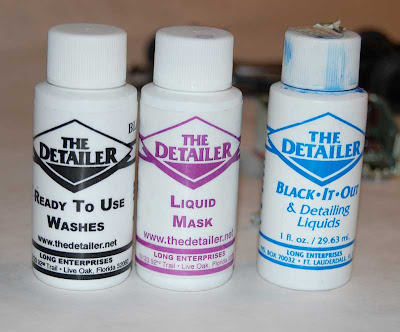 The more I use "The Detailer" Products the more I like them. I bought the masking "Detailer" as an afterthought and have started to find it very useful. It's extremely thin and dries to an odd purple when it's set, which makes it easy to identify--and it's easy to remove, but not too easy to remove accidentally. I used this on the belts for the engine and it came out better than the MicroMark liquid mask I had been using--I could mask with better detail. The washes are excellent, and remain better than any wash I can make myself out of paint and thinner. 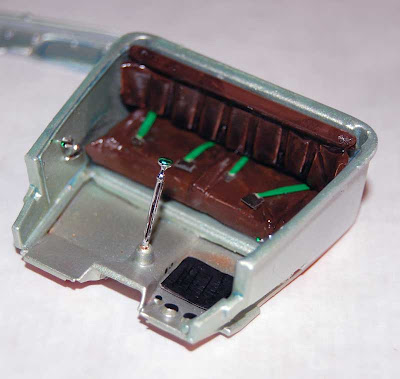 The interior is getting done too. The mint green was created with a light blue acrylic, some Jacquard Pearl EX gold powder, and Future Floor polish. It airbrushed over easily. I added some blue detailer to it to highlight some of the interior, but chances are no one will ever notice. The polymer clay seats came out OK, but, I should have used flat paint on them, as Testors Dullcoat wouldn't tone down the shine, even after multiple coats; I have no idea why, but it didn't work. The seat belts are photoetched buckles with painted masking tape for the belts themselves.

The carpet matt came out the best of anything so far in this build. It started with a very thin sheet of polymer clay that I cut and scored. Then I put it in the oven and actually overcooked it (it came out sort of burned looking.) To my surprise it was still pliable, which meant I could bend it slightly around the floor, which of course a real rubber matt will do. It had not turned into the fired-clay, rock hard material I expected. In spite of its overcooking, it still took paint OK (flat black acrylic in this case, which ended up looking how I wanted--flat). I epoxyed it to the floor which of course means it won't bend anymore. The fact that overcooking polymer clay leads to a flexible rubber type of material is very useful to know about. I am going to experiment with this surprise discovery more.

The dash still has a bit to go, but it was painted with the same mint green as the interior. I am probably just going to use the stock decals behind the bezels for the gauges. As usual in a project like this I am getting a bit impatient and feel it might be time to move on. 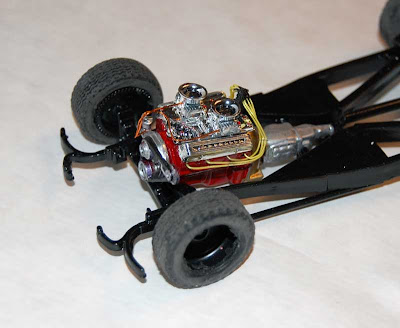 The engine/chassis isn't looking too bad. I tried to make some fuel lines out of "winding wire" from a small electronic transformer but didn't bend it as accurately as I wanted. I started to try to incorporate some photoetched carb linkages but it was proving too difficult--I will need to build a "junk engine" to practice gluing the itty-bitty photo etched parts in place before I am ready to use it for something serious like a build that's this far along.
Posted by Charlie Lamm at 10:16 AM