I'm continuing the build of a 1:25 replica of the "Old Skool" Hotrod my dad drove in the Fifties in Texas. This week it was on to the Flathead (the motor, not Dad's hairdo).


I was presented with an historical challenge if you will--historical accuracy vs. how well the engine block would fit in the frame without a lot of work. Being the time-constrained guy I am, I chose the latter. To wit: I bought a resin stock 32 frame and Z'd it, and the block/tranny I wanted to use was one of the 30's era "stubby tranny" types.

My original 1:25 scale postwar 1940's era flathead (probably from some unknown Revell kit?) matched the 1:1 engine block fairly well; the 1:1 engine was out of a right-after-the-war merc--maybe a 48?. However, for my build I couldn't get the tranny to play nicely with the frame so I abandoned the "accurate" block for a later block/tranny combo, namely out of a 53 Lindberg Victoria #17172. This fit the frame perfectly, and I figured only the most tsk-tsk type car buff fanatic would notice the discrepency (come to think of it, most all of my dad and brother's professional car buddies would look at this and say--gee, I don't think he got the block right...) 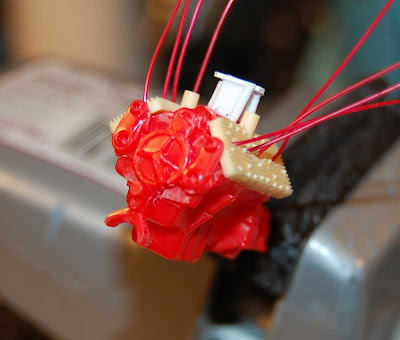 Here's the block with the distributor wiring already attached. I drilled out the heads and looped very small gauge electrical wire through each pair of holes. This because I have always in the past made a mess getting the spark plug wire in place. The heads don't sit quite flat, but that's something I will deal with on the next flathead build. 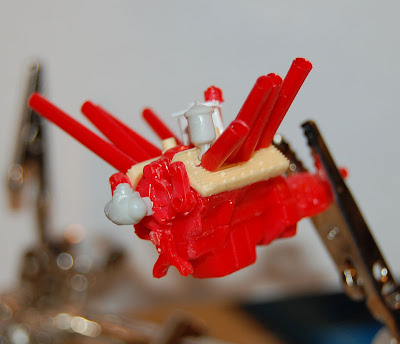 I usually have better luck building as much as I can, then painting everything at once. I know others disagree with doing it this way. I am getting ready to paint by putting small drinking straws over the distributor wiring. I thought this was pretty clever but some paint did get on the wires. And I thought paint wouldn't stick to the wires (Teflon?) but I was wrong--some got in there and stuck. 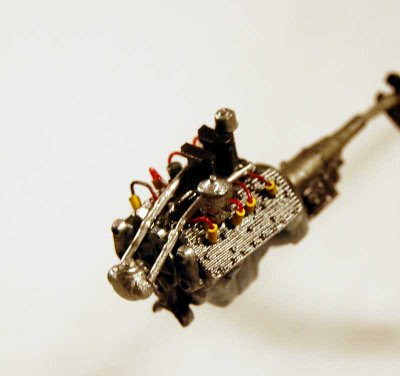 I did a lot of kitbashing to get the parts for this. The distributor came out of some old Revell kit, but I am not sure which, as did the pulley/belts, Stombergs, and aftermarket oil filter. The intake manifold (supposed to be a Thickstun) was scratchbuilt as I couldn't find it as an aftermarket part. 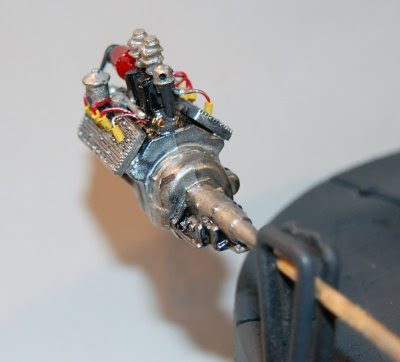 So here's the engine in its current form. I used a lot of different metallics to try to get a "realistic look". The Generator was painted red; I am sure that's not the color of the 1:1 but this engine needed a bit of color. Dad tells me the engine was 1/4" thick with layer after layer of silver paint....and yes you can see the little stripe on the top of the tranny where the halves are joined, but no one will ever see it. Overall, I think this flathead ended up looking like something out of a model plane, and maybe that's not the worst thing. 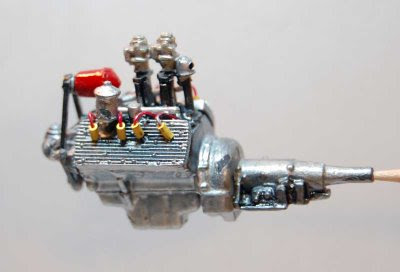 The sparkplug boots (not on the 1:1 car--another addition for color) are yellow shrink tubing. One of the them in this photo is a bit bent but that's not hard to fix. This flathead won't look too bad once I put the little chrome aircleaners on, but I will wait on that for the final part of the build. 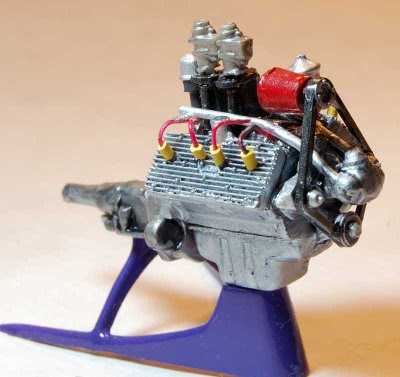 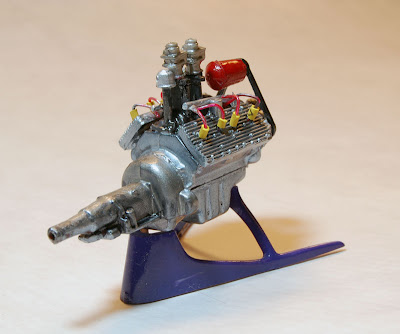 I am going to remove the generator and clean that up a bit, but I don't want this engine to look very "clean". The 1:1 wasn't as it was built by a car crazy Ike-era teenager.
Posted by Charlie Lamm at 7:27 AM

Looks nice...did the car have an automatic trans?

Nope...but the auto trans and block fit better in the frame so that's what I'm using here. Not accurate....but overall I think it will end up looking better.

The engine from the amt 49-50 ford or amt/mpc 29 woody/pickup (same casting) has the standard trans w the long tailshaft like that...also has a two-carb manifold..carbs are bad though... probably best 97s come from old revell kits...

Thanks for the info, I'll look for the MPC woody kit and check it out for a future build.