It's a sad couple of weeks when all I did was work--no writing, no playing, no nothing, but that's what happens when 2 of the 4 guys in your department are gone.

So no post last week, and not much done this week.

However now with work having quieted down a bit I can turn my attention back to the important things in life....family, hobbies, and getting some sleep!

My folks showed up for the weekend and one of the first topics of conversation with dad was--you guessed it--the old skool Texas hot rod. Seems he's been following each post with bated breath.... 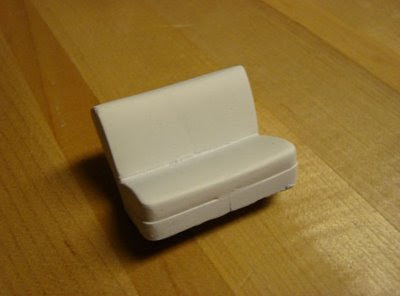 We ran right to my bench and dad started looking at each part in progress....first up: the almost scratch built seat. Good News! He says it's looking right on the money. Good news indeed, because it's been a heck of a lot of work to get it as far as I have. The old man says the 1:1 seat was out of an Anglia, but I couldn't find anything close, anywhere--you can get 1:25 Anglia Gassers on Ebay or whatever but they don't have stock seats, and that's what I needed.... 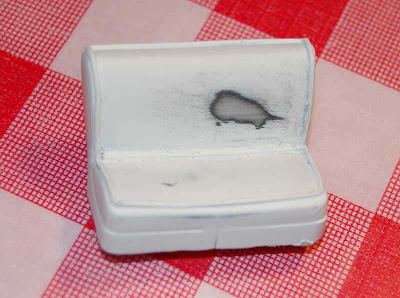 I ended up building the bench seat by sectioning two 49 Merc seats (???--maybe not a Merc, but something from AMT) and putting them back to back....giving me the sort of bench seat on which I figure I was conceived. It looks a lot like the photo of the 1:1 seat anyway. I also added trim out of some styrene rod...carefully gluing it in place with Tenax7R glue but it still didn't come out quite straight. Good enough however.

The 1:1 seat had plaid covering the front--where you sit. Exactly how to pull this off has vexed me from the start of the project. I looked far and wide for scale plaid, and had surprisely little success finding it on the web. So in keeping with the family theme of this week's post, I drove to my mother in law's, who is a serious quilter, to see if she had any scale plaid she could part with. 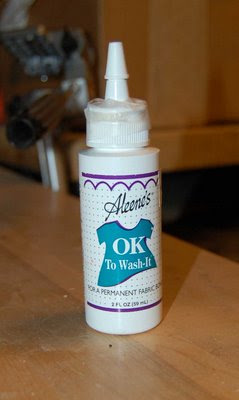 Sure enough, she had some scale plaid, and also showed me some nifty white glue she uses to bond quilting fabric to anything and everything. It's called "Aleene's OK to Wash It". Now this sounds more like something your priest would permit, rather than something used for our hobby, but as my MIL promised, Aleene's is indeed most excellent for bonding fabric to plastic. I tested some of the scale plaid she provided by gluing to a junk-box seat and it came out looking smooth (no bubbles, no crud). 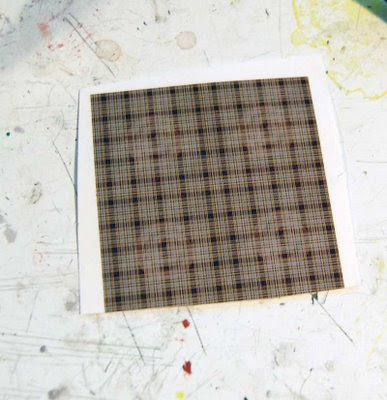 Unfortunately the fabric my mother in law provided was too "red"; the old man assures me the 1:1 car was mostly green and gold--no red. So I decided to look for plaid patterns on the web and see if I could create a decal to stick on the front of the seat.

I got some inkjet decal sheets from Micromark and prepared a 6" x 6" plaid Photoshop picture by stitching together a screensaver backround I found. The good news is that my dad signed off on this--he says the colors are close to how he remembered the plaid to be on the Texas hot rod (no color pictures survive....). I printed out the decal and sprayed it with Krylon Krystal-Klear acrylic paint. Experiments with seats I didn't care about made it look like it's going to come off OK but it's not done yet.... 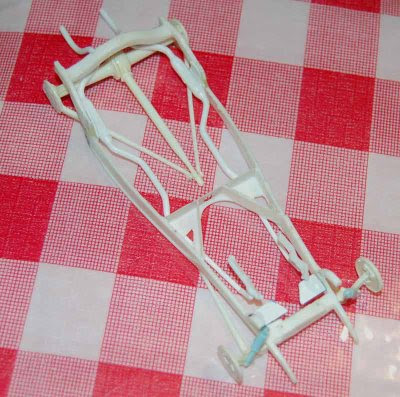 also I am still banging away at finishing the frame. Now, on previous builds, my exhaust headers and pipes never quite met up with the engine. To get around this I decided to build the pipes and headers into the frame and paint them as a unit. 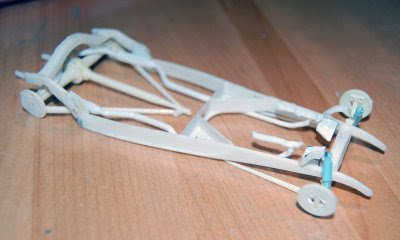 The pipes/mufflers came out of Revell's 32 Ford 3 window coupe #85-2024; the headers from some unknown flathead ford kit, and all the rest was scratchbuilt. I built it up a bit of a time using styrene rod, super glue, and superglue accelerator. I am slowly getting better at using CA glue for meaningful things but I still have a long way to go! However I had the least incidents this time of gluing the part to my finger instead of the model--only one, and it was minor!

The old man and I discussed how to deal with the front hydraulic brakes....something I still have to figure out, and I don't yet have a clue how I'm going to pull that one off..... 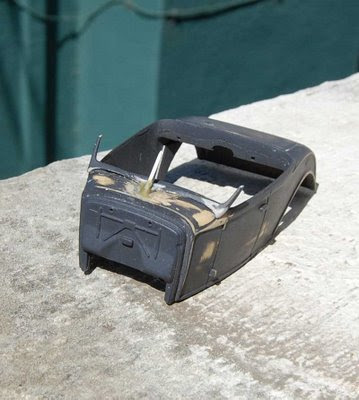 The body....Dad says the hallock windshield I put in there wasn't right--that it leaned back to far--and checking the 1:1 photos he was right. At first I said I couldn't fix it--the prospect of messing around with the windshield, fragile as it is, really scared me, but after awhile it started to bug me that I didn't get this right, so I cut off the center of the windshield frame and sweated in some styrene square stock. Here I am finishing it off with a tiny bit of Tamiya light curing putty. I give it about a 50-50 chance of staying together before this build is done. 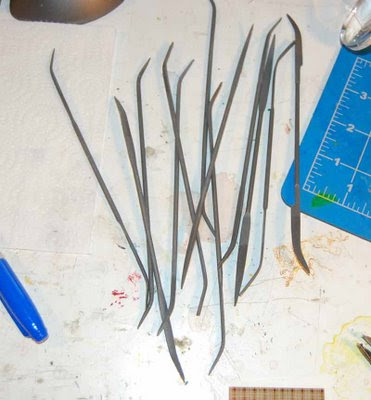 If I can pull off the mods to the windshield some of the success will be due to this new tool I picked up--riffler files. These are files that can get into tight places, and have already proved invaluable for this project. If you don't have any of these, run don't walk to your crafts or hobby store and pick some up!

OK hopefully work won't be as daunting this week--I would really like to get this project off the bench, it's taking a long time. Patience! I keep telling myself!!!
Posted by Charlie Lamm at 7:52 PM