I'm pretty jazzed about Sixties era gassers--I think of them as funny cars before there really were funny cars. After seeing a few at Billet Proof I decided to read more about them and see if I could build something in scale, with the eventual goal being to build this 1:1 (if I ever have the money or the space).

it's a heck of a lot cheaper to buy a few kits then the 1:1 parts....I got two Chevy kits from ModelRoundup, Revell/Monogram's '55 Chevy Bel Air Hardtop 2n1 #85-2069 and AMT/Ertl's 1955 Chevy BelAir Street Machine #31931. The AMT appears to be a reissue of a 55 Chevy kit originally tooled decades ago; the Revell kit has what the hobby mags call "modern tooling". The difference between the two is profound--the Revell kit has significantly better detail, a higher parts count, and generally (to my eyes anyway) shows how model kit manufacturing has improved over the years. 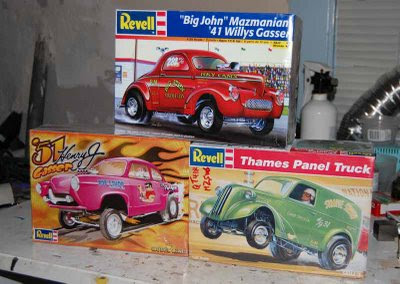 This isn't going to be a "box stock" build (nothing I do ever is) so I got some additional kits out of which I will steal gasser parts: Revell's 51 Henry J #85-2036; Revell's Big John Mazmanian 41 Willys Gasser #85-2350; and Revell's Thames Panel Truck #7609. All three kits have some really great parts; the Olds engine with Hillborn Injection in the Revell Panel Truck is especially nifty. 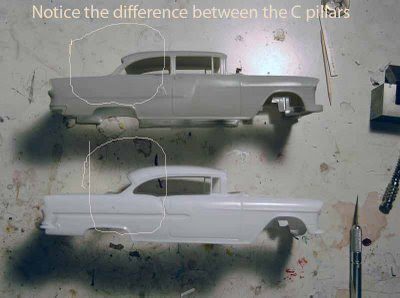 So which body to use of the 2 donor chevy kits? That's an easy choice. The roofline of the AMT Bel Air doesn't look right to me--it looks more like a 57 Sport Coupe's, but it's not a hardtop--I am told it's a 55 "Club Coupe" which had on the 1:1 car a different roof then the hardtop. Bottom line, to me it just doesn't look right, so I am going with the Revell body. 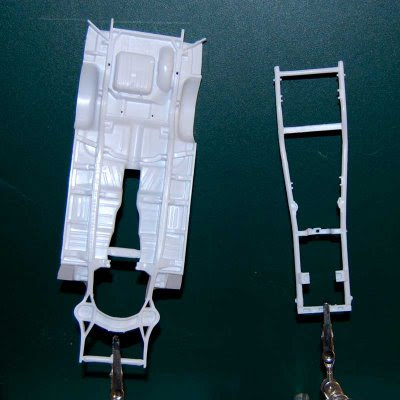 The Revell Bel Air kit has one of those "all in one" chassis/frames, which is beautifully detailed and molded but not what I want for a Sixties era gasser. On the right is the frame from the Henry J kit. Its wheelbase is way too short for the Chevy, and it has a lot of ejection pins and whatnot that will need cleaning up, but I figure it's easier to use the Henry J frame as a base, and extend its wheelbase, then build the whole frame from stylene tube. 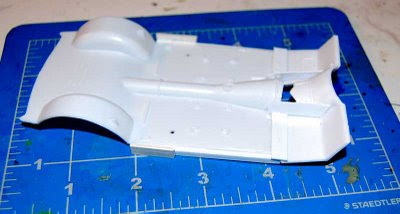 I modified the interior floor from the 51 Henry J by marrying the front section of the 55 interior to it. I saw gussets on one the floorboards of a gasser at the Billet Proof show so I added them here; in general the gassers there were more about lightness and strength then looking completely clean. 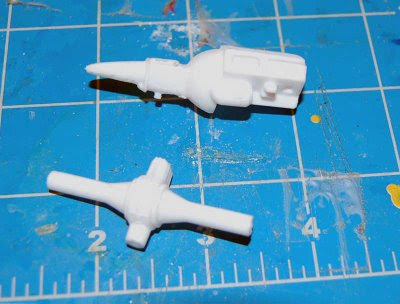 On the web there are a few builders who complain loudly about what a crappy kit the 51 Henry J is. I won't know, because I will never build it, it's just a donor kit for the project. Whatever assembly issues may exist with it, it has some great parts! For instance a very cool quick change rear end and a gnarly representation of (what I think is) a big block Chevy motor. I am not sure why, but I want a Chevy motor in this and not Mopar/Hemi. Not sure if this is going to be a "GS" (supercharged) gasser or a "G" (non-supercharged) gasser yet.

Next time: I'm just out of the starting blocks on this build. Lots of work down the road!!!
Posted by Charlie Lamm at 10:55 AM

Charlie, I liked what you did with the 1955 Chevy Gasser. With the candy apple red paint, it makes the model stand out! If I were to build one for myself, what would I need and where would i find the parts?

Here is what I used for this:

I got some engine details from arrowhead specialties who I believe are out of business; some of the engine parts came from the MPC switchers 32 Ford Phaeton.

The wheels (very important to any build!) come from Revell parts pack C1142 which you can get on Ebay if you look around.

If I were going to build this again I probably would have taken the front "straight" axle off something like Monogram "Badman" Chevy which as been reissued I believe. That would have been more realistic I think.

Charlie, have you have seen the gasser Shakey Puddin which is 1955 Chevy Gasser on Youtube? Well, I'd like to build a scale model of it, but know where to begin. What would you suggest i start out with as a model base?
Like you I have a thing for '60's era Gassers. They're fun to watch on Youtube and fun to build as a scale model.

>>What would you suggest i start out with as a model base??

As I see it, Shaker Pudding is a club coupe so you'd want the AMT bel air. Badman and Revell 55 are fastbacks so i don't think you want those for the body. Anyway you need the one with the big roof.

You could kitbash some of the other parts off Monogram Badman although it's 1:24.