The 55 Chevy gasser project is almost finished. After taking some time off from pretty much everything for the holidays I'd like to get this build done so I can start some new things. 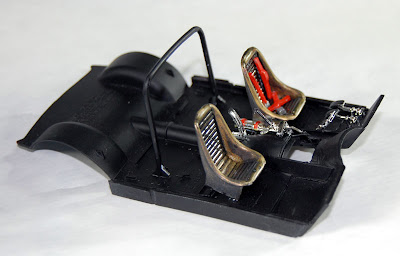 As I mentioned in an earlier post, the interior is actually two interiors bonded together: the interior from Revell's 51 Henry J #2036, which was extended by grafting on parts of the interior from Revell's 55 Chevy #85-2069. I liked the look of the Henry J interior--it matched the look of some of the 60's gassers I found in some research material--but wasn't long enough for the 55 Chevy, hence the mods. The whole thing was painted with a combination of Tamiya matte black--a popular paint with modelers everywhere, showing up in many magazine articles about builds, and one of my own new favorites, Floquil Engine Black along with Floquil RailRoad Colors Flat Finish. Used in different combinations throughout the build, the end result is a multi-tone flat black, which is great because on a 1:1 car all the flat blacks aren't going to look the same. 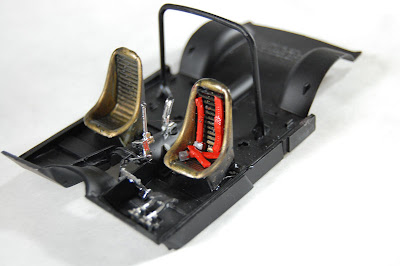 The rest of the interior parts came out of one of the Gasser donor kits for this build (The Henry J, Revell 51 Willys Gasser #85-2350, the Ertl/AMT 55 Chevy #31931, and Revell Thames #7609) or the parts box. I bought an expensive photo etched 5-part seat belt for this build, but besides not being true to the 60's era sort of look, I also found myself too rushed to take the time to build the seatbelts "just right". Instead I went to the parts box and cut up some seatbelts from a 63 Corvette that got scrapped, and reused them here. And there's only belts on the drivers side because apparently on some older gassers only the driver's seat needed them--NHRA rules said you had to have a passenger seat but of course no one wanted the weight of an extra body on the quarter mile....Good enough.....who's going to look into the "window" of the build and really study the seat belts, anyway?

One of the hardest and most frustrating parts of any build in recent memory was getting the glass into the Chevy body and then getting the dash into the glass/body without making a mess. I had everything mapped out and it should have all gone together easily but it didn't. I ended up using bare metal foil for the windshield brightwork, and the "wrapped under" part of the BMF got in the way. I ended up using the glass out of the AMT 55 Chevy Bel Air instead, which sort of fit, and ended up creating special "pinning" on the dash so the thing would stick where it should stick. Overall it didn't come out too bad, but, there was one heck of a lot of cursing trying to get it all together. Not stress relieving, and not good! 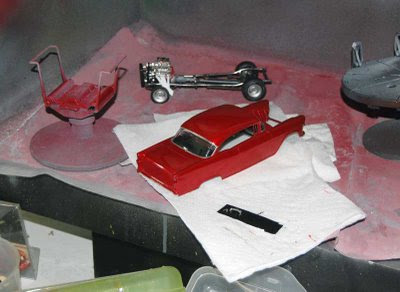 Good news is I'm almost ready to wrap up this build. I need to do an assembly of the body/interior/frame, lay in the goodies like headlights and door handles, and do a final detail pass at the engine compartment. If all goes well, I can finish this this week. I have been having dreams at night about Mopars so that's probably where I'm going next.
Posted by Charlie Lamm at 3:45 PM