After a few weeks and some time off for the holidays the 55 Chevy Gasser is finally DONE. Thank goodness! It's time to move onto something else! 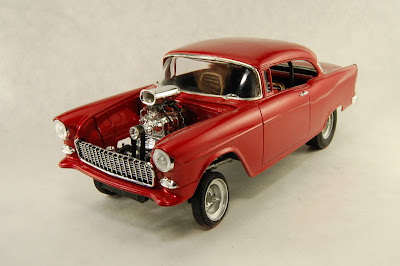 It's probably been 6 months since I started reading up on 60's gassers and trying to figure out how to make something that's fairly accurate in terms of getting the right parts in there. So here it is. The finished build should have some decals I guess, as strip gassers from the 60's at the very least would have had their class (this would be a C/GS or D/GS I believe) painted on them somewhere. I couldn't bring myself to cover up the nice Tamiya paint with decals.

Even though the paint is a single solid color, right out of the rattle can, this build was a lot of work, but I am not entirely sure it shows. It makes me realize how much work some modelers put into their detailing on things like the engine compartment. I am not sure I have it in me to spend that much time on any one build. 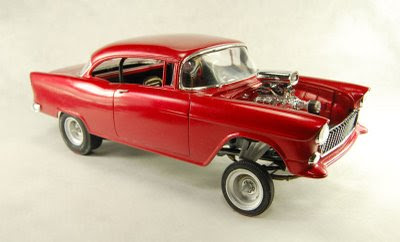 The most frustration I had with this build, turns out, in addition to getting the glass to fit, was this: I lost an itty bitty door handle right before I was going to take the photos you see here. I looked for it for about an hour to no avail. I ended up going into my parts box and finding something pretty close. So the door handles don't quite match. How many times can I say "good enough" on one blog? Here I'll say it again: it's good enough. 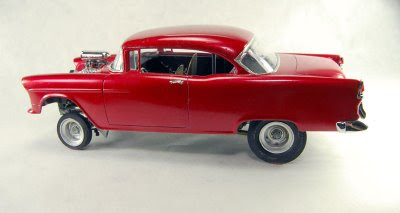 One creative thing I did for this build is to use the hand grips from a drag steering wheel in the interior, as door pulls. Looks pretty gothic, and 1/24th and larger kits with drag type "butterfly" steering wheels are good candidates for this. 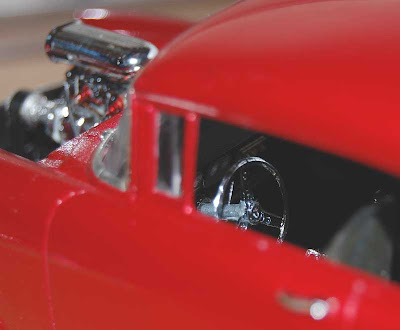 Is there a commercial kit like this--that would give me this look box-stock, and make all the kitbashing and customizing unnecessary? I remember building the Monogram "Tom Daniels Badman" kit about 10 times as a kid, which I am pretty sure has gotten rare and hard to find, which is pretty close I think if built box stock. However the big block Chevy combined with the retro interior, the huge difference between the "big and smalls" and the parts pack wheels gives this build a look of its own. But it's a subtle look and perhaps I was trying to get an "oh wow" look. It's not oh wow....oh well..... 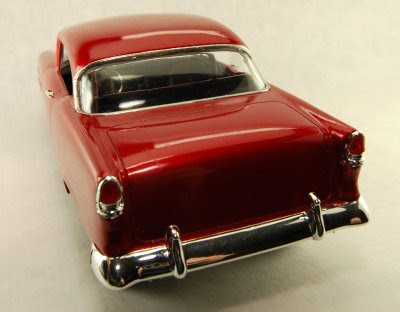 Overall a very fun build, and I recommend any of the kits I pilfered parts out of to anyone except the Henry J kit--which is a good kit as a donor for retro gasser parts but not good for much else. I give an A++ to the 55 Chevy Revell kit that donated its body to this build--now there's a wonderfult kit. Also the Hilborn injected Olds engine in the "Simple Simon" Thames gasser is one of the coolest engines I've seen in 1:25 scale. It's now waiting in my parts box to be stuffed into a dragster that I will build before too long. The big blower (see earlier posts for which kits were used....) is a perfect way to top off a fun build. It was extremely satisfying to glue on the Willys blower scoop and call things done.

Now I'm ready to put the hot rod thing aside for a bit....Next up: Mopar mania. Is there no end?
Posted by Charlie Lamm at 11:58 AM

Congrats on the finishing of your 55 Chev gasser . I'm rather impressed , it's a fine looking model and an excellent representation of an early 60's drag car . Looking forward to your next build .