After about a year of clandestinely viewing the model car section of Ebay, I finally decided to plunk down $17 on a "Vintage" MPC kit plus something like $8 for shipping. I won the bid!!!! Joy!!!! 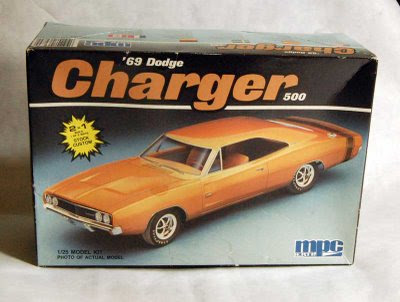 It's an MPC! MPC lives forever! (Well, MPC/Ertl. Close enough.) When I was a youngster I remember my brothers and me thinking MPC always had the coolest stuff. We probably built every one of their kits at one time or another.

MPC is long gone of course, and nowadays, some MPC kits, in unbuilt/new in box form have become collectable. I see kits going for $70 to $140 to $200....not the price of a collectable Gibson ES335 or a Tiffany Egg, certainly, but for a box with a bunch of dumb plastic inside it seems to me a lot of money.

I am not one for collecting anything, really, but I wanted to get my hands on an authentic MPC kit for the first time in something like 35 years, so out came the credit card. Besides, I love '69 Mopars!

A few days later kit showed up at my door.

So off came the cellophane (I am going to build this, not just put it on the shelf! Go Ebay!) and guess what? The whole thing smelled like mildew inside. I mean: make your eyes water, nasty, stinky mildew. 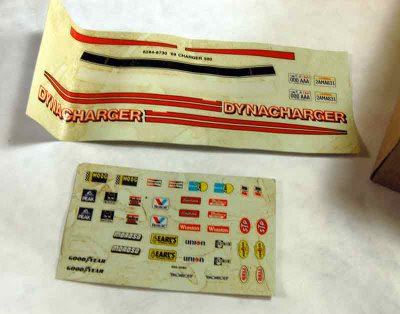 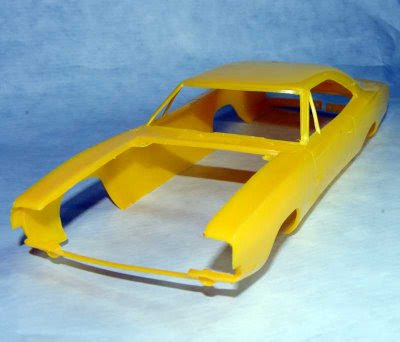 But the biggest issue was that the entire drivers side of the body was tweaked about 20-30 degrees off center. It's as if the body was stored incorrectly inside the box and during the 20+ odd years of sitting around (the kit is copyright 1987) the roof and driver's side caved in. I'm not sure the picture above shows the true horror of the tweak, but, as it sits now, this banana-yellow Charger body is unusable!!

Out came the hot water and attempts to bend it back. Nothing seemed to work--even after bending it a bit a few days later the body would return to its unusable state.

So what to do? Go to the Internet of course. On the Scaleautomag.com site I posted my dilemma and the general response was: you'll never be able to bend the roof back. Stop wasting time and just get the Daytona reissue of the kit.

Reissue? So I didn't need to go through any of this "vintage kit" hooey at all? 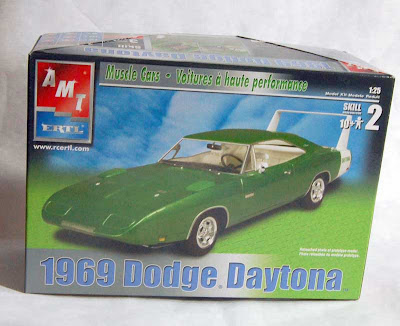 Yep. The AMT/ERTL Daytona kit #31747 is the same thing as my beloved MPC with some extra "Superbird Parts". So I didn't need to get the vintage kit at all, eh?


Well, maybe, but maybe not. There are subtle and not-so-subtle differences between the two. 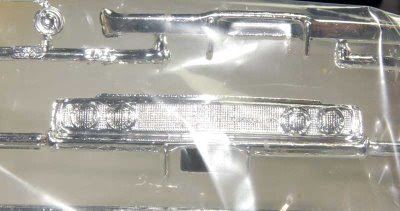 The Daytona kit obviously has parts the 500 kit doesn't, such as the rear wing and front nose--so the biggest difference is the front grille. The vintage kit has the correct Charger 500 Coronet-style "lights out" and the newer kit (which I am surprised has a grill at all since it's a Daytona) has the headlights retracted, non-500 sytle. The good news is the basic "body shell" on the reissue is the same as my vintage purchase. So I will build this kit "lights out" so anyone in the know will say--wow--that's a vintage kit! (In reality, if anyone ever really said that, I'd probably fall over....) 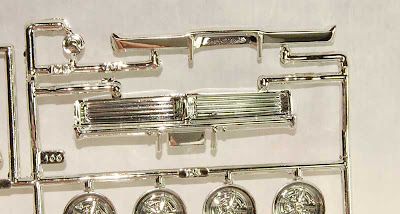 So what does this all mean? I think for a builder, as opposed to a collector, staking your build on the condition of an unopened vintage kit may not be the best idea. There's no way of telling which kits have unforeseen damage before you buy, at least not through Ebay, and I could easily see paying a lot of money for something that can't be built--maybe ever.

Maybe it makes sense to buy vintage kits to rob parts out of them that aren't otherwise easy to come by. For me the jury is still out.
Posted by Charlie Lamm at 9:02 AM