On a quest to find 1:1 Charger 500 facts my brother had me contact a 1:1 Charger 500 expert. Turns out this guy doesn't build models--he wants the girls to actually date him I guess--but being a 1:1 Charger nut and apparently owning everything Charger he had the same vintage MPC kit, unbuilt, in his collection. To get myself a spare--I envisioned accidentally dropping and crunching the Coronet grill under my chair at the end of the build--I convinced him to sell his MPC kit to me. Which he did.

This same Charger expert informs me that AMT/ERTL reissued this exact same kit (not just the reissue Daytona but an exact duplicate of this Charger). So I've learned that my "Vintage" project is not as rare as I thought--in fact, it's not that rare at all. 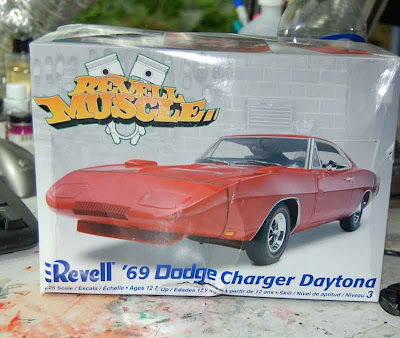 I was going to build the MPC "box stock" but it wasn't meant to be--there were too many details missing that I couldn't fill in from my parts box and it was driving me crazy. So from Model Roundup I bought Revell's 69 Charger: kit #85-2824 "69 Dodge Charger Daytona". This is a "skill level 3" kit which means a 12 year old (as opposed to a 10 year old) has about as good a shot as me re: being able to build it. Thank goodness! 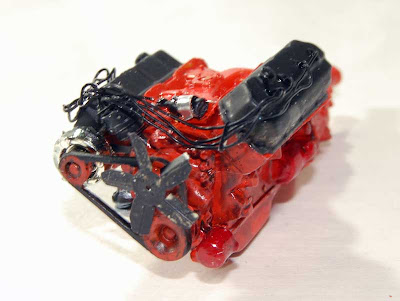 I wouldn't say building engines is getting old but it's getting easier. I am taking more time to line stuff up and am back to using Testor's red tube glue for a lot of the "normal" gluing. That seems to help. Consequently the engine is building up pretty well. Unfortunately the air cleaner isn't chrome (and it is on all the 1:1 cars I could find pictures of) so I might send it out for chroming, which would be a first for me. I am not sure what I am going to about the engine decals, like the "Hemi" sticker on the air cleaner. I will probably have to make it myself. 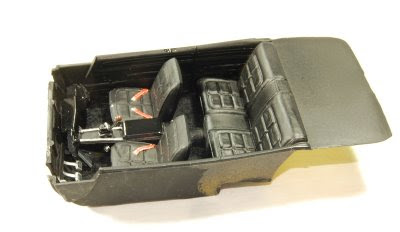 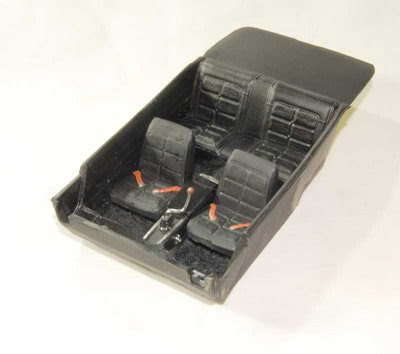 The interior is a combination of both kits as the MPC kit is low in the parts count department. The MPC kit has good looking seats, but molded-in seat belts which can be a pain to paint. So I tackled this a new way (for me) and it came out well. I first covered the already flat black seats with Bare Metal Foil, painted the belts with Floquil flat orange, then after the Floquil was dry, I cut around the seat belts and peeled away the BMF, leaving painted BMF just on the seat belts.

The result was 100% better than if I tried to hand paint or mask, and took about 2 minutes not including drying time. And of course the BMF over the belt buckles was left chrome as an added bonus. 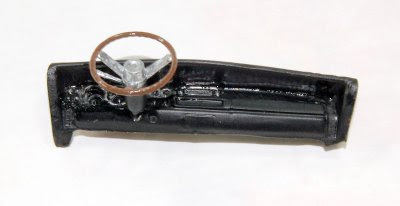 Dashboards remain difficult for me. I am back to using a silver art pencil for the dials but I don't know--I just can't get that "forget 1/25th, it must be 1/8th scale" sort of look that better modelers can get out of their dashboards. I drilled out the dial backs and used a piece of brass to give the dials some "depth" which worked, sort of. The 1:1 car reference photos show a "textured" look to the instrument panel but not what surrounds it. I imitated this by painting everything with Tamiya Matt Black then offsetting the instruments with Tamiya acrylic clear. This did give me the basic look I was after.

On to the body next. I ordered "factory correct" colors from MCW paints and with my additional MPC acquisition have a decent set of decals now. I also got some 69 charger R/T photoetch from ScaleDreams, so getting some of the body details right will be a bit easier. We'll see if I can get through the airbrushing next time.
Posted by Charlie Lamm at 2:38 PM