At Last!! It's time to wrap up the "MPC Charger 500" Vintage Build! It defies belief that what should have been a simple 2-3 week project turned into 5 months of spills, accidents, and glue blobs! This was the most jinked build I have ever done....wrecking the paint with the wrong clearcoat turned out to just be the beginning of my problems.... 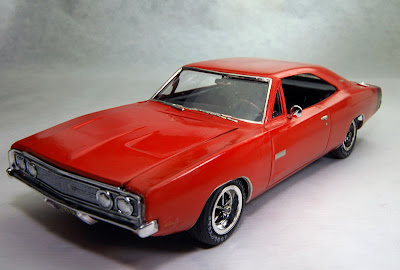 One of the main issues was that the front grille simply didn't fit into the body provided--the body was too wide for the "Coronet" grille. When I was trying to repair this I carelessly glooped some G-S Hypo Cement on to drivers side front fender. Out came the isopropyl to remove it right? BAD IDEA! The alcohol ate through a bit of the Future Floor Polish clearcoat! Now one of the front fenders is less shiny then the other....and you can see the yucky shim I ended up putting next to the front grill/bumper to hold it to the body. There are other drips and runs here and there with the clearcoat if you look carefully. I guess I didn't have the energy to spend more weeks on getting the clearcoat and polish just right. Oh well. 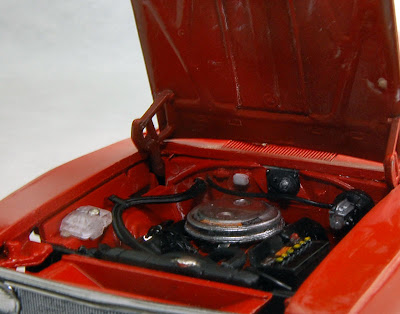 I am going to display this build "hood up" since the engine compartment ended up looking pretty good. But the engine had its fair share of issues as well. For instance, I had a heck of a time getting the "426 Hemi" decal onto the air cleaner. I ended up buying 4 sets from Keith Marks Graphics and that's a good thing, because it took 4 of the Hemi decals to get the air cleaner looking OK. And I learned something else: when applying decals on engine parts, put the decal on when the part AFTER it is in place, not before. Doh! I ended up doing a good job getting decal #3 onto the air cleaner, only to destoy it when I put the aircleaner on the engine.

As long as we're talking engines--I spent a fair amount of time trying to "modernize" the old-school tooling of the hemi, and, the air cleaner was treated with Alclad to make it look chrome. Turns out none of this was necessary--Revell has a much better tooled Dodge Hemi (with a great looking Hemi-style chrome air cleaner) in the 67 Dodge Charger 426 Kit, # 85-7669. Lesson learned: before spending a lot of time on modifying something, make I need make sure it isn't already out there in "box stock" form! As it is the air cleaner looks like it is a plastic bit painted silver!!! 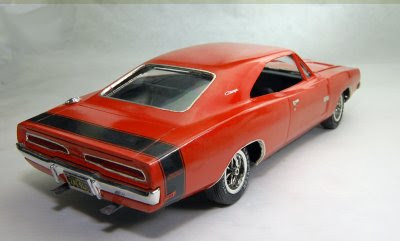 The rear bumper didn't fit either--I ended up having to carve out the rear valance, push the bumper in place(no glue needed; it was a tight squeeze) and then touch up aroud the bumper with hemi orange MCW paint....I know I've said this before, but I need to spend more time test fitting before I paint. I assumed the rear bumper would fit--it looked like it would...but "when you assume"..... 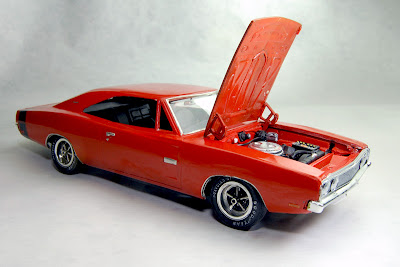 In spite of all the issues I had with this build, it's not a bad looking build, and IMO the MPC tooling of the body looks more "long and lean" than some more current offerings, like the "Revell Muscle!" Dodge Charger from Revell #85-2824.

So I am thinking, what next? 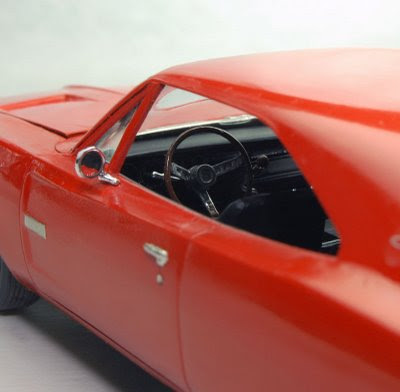 I am tempted to jettison the whole "muscle car accurate build" thing and go back to hot rods, which can pretty much be built anyway I want. But there is a lot to be learned from builds like this, so I think a few more are in store, soon.
Posted by Charlie Lamm at 7:46 AM