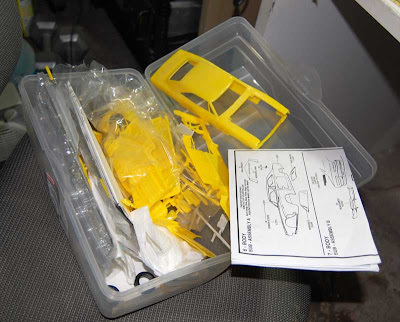 After my on again, off again struggle building a "factory accurate" model of the rare 1969 Dodge Charger 500, it was time for a change. But what about all the left over parts? I had a big box full--some from the original "Vintage Charger 500 MPC Kit", others from the spare Vintage MPC kit, bits from an AMT/ERTL Charger Daytona, plus a donor Revell Charger R/T Donor kit....yep, I had a lot of '69 Charger parts on hand!!!

I would normally just throw these into my parts bins. But! Frustrated with how long the stock build went, I realized it was time to build a "scrapper."

So what is a "scrapper"? Back when dinosaurs still roamed the earth my brothers and I would gather in the family basement, collect any scrap parts we had left over from whatever we were building, mix in things cannibalized from models we wanted to get rid of, add parts from what I recall was a truly amazing parts box of bizarre model car goodies, and build something up fast, fast, fast that was cool, cool, cool. Usually our end result was something with big rear tires and a big V8 motor, with blower of course, the product of the "Inner Hot Wheels" mentality common to many 10 to 12 year old boys. 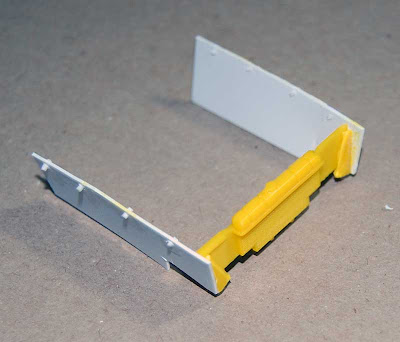 I realized I hadn't built anything like this in many a decade, and that much of my inexplicable return to model car building is attempt to recapture innocent and simpler times. So a scrapper it must be.

My adult take on the Dodge redeux is a bit more refined, a tiny bit anyway, and maybe that's not so good, but, like it or not, I couldn't bring myself to only use scrap parts for the build....so I started to craft parts from scratch like the inner fender wells and radiator for my Dodge Scrapper about 4 days ago. 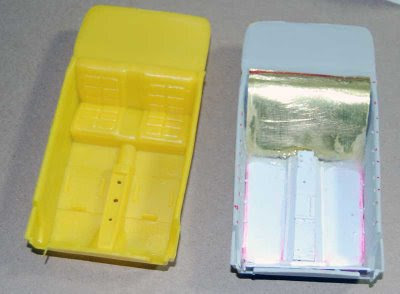 The stock interior tub would never due ("too wimpy" my older brother would say back in 1968, as he hacked the crap up out of whatever he was working on with his dremel tool), so I sawed out the guts of the tub and put in a scratch built floor and brass plate where the back seat was.

Man that firewall has got to go too. "Too wimpy"!!! I made a template for a new more macho firewall from card stock and transferred it to .010 plastic. Most gluing was done with CA (which we never had back in the day) and Tenax 7R type plastic weld (ditto). The bolts--bolts never look wimpy--were small styrene rod shoved through 000 type drilled holes and cut off with a sprue cutter. Yes it's more refined, but at least everything was done fast, fast, fast.

The dashboard also got de-wimpified. It has a way to go but the basics are starting to shape up. I could try to Master-Modellerize this scratch build, but that's not the scrapper mentality. It's getting close as-is. 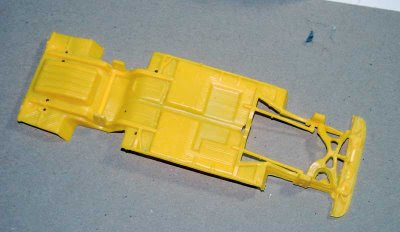 The chassis is one piece, as the Charger is older tooling and a lot of the details are molded in. Thankfully it doesn't have the exhaust molded in, as that would take a lot of time to neatly remove. 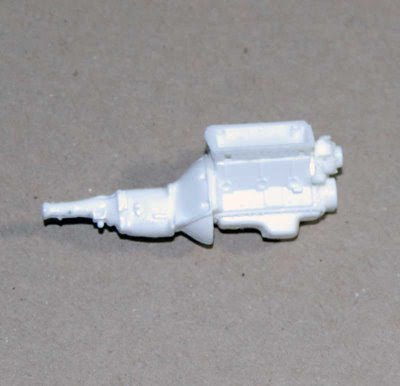 This is the Dodge Hemi block I should have used on the Stock build, very nicely tooled, it comes from the.... 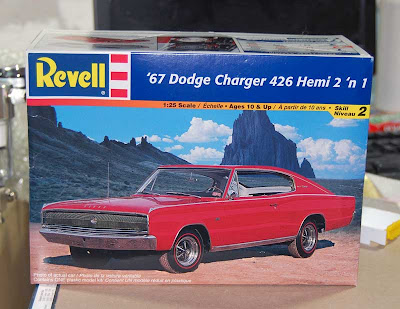 ....extremely cool Revell 1967 Charger kit #85-7669. There are all sorts of good parts in this kit for anyone building a 60's era Hemi Dodge. And that's the good thing about building an adult scrapper--now I have $15 in my pocket to impulsively buy kits like this one at the local hobby store. Back then it was $2 a kit, but it might as well have been $1000, since I almost never had money to buy that kit I really needed....and yes, I miss those rainy days in the basement with my brothers.
Posted by Charlie Lamm at 8:29 AM