69 Charger 500--MCW Lacquer Finish, Back to Square One

One thing about a hobby Blog, you can tell how long you've been working on a project by when you started the first Blog entry about it. For this given build, it's been way, way too long. What I naively thought would be a few weeks on an almost box stock "vintage" build has turned into more than five months (!!!) of hard work and much fear and loathing. Part of it because of travel, part because of the holidays, part because of a destroyed paint job.... 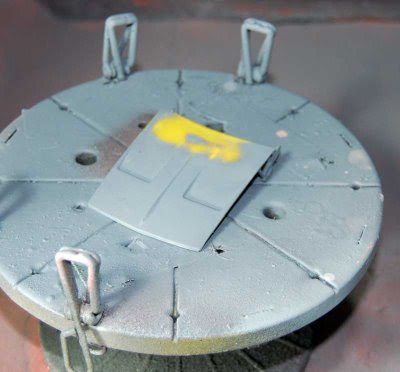 Ah yes, destroyed paint. As I said a few weeks ago, due to an incompatible clearcoat, my MCW lacquer paint job was ruined; the 69 Charger body had to be stripped of paint using EasyOff Oven Cleaner, and I had to start over with the paint and body prep from square one. After several days in a Tupperware tub the old paint finally came off, but I also found that some of the putty repairs I made to sinkmarks and whatnot came off too and had to be redone, like on the hood. 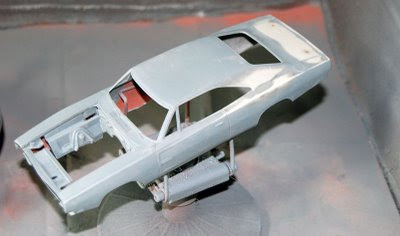 It almost got me to abandon the project--all the careful work I did filling this and that casting imperfection were gone along with the paint. So I did the putty work over, as well as the Keith Marks decals, the Bare Metal Foil, the MCW paint. 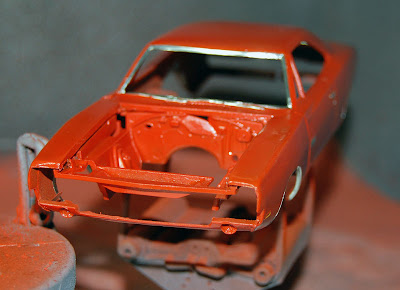 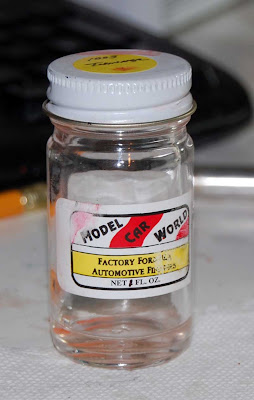 MCW clearcoat was what I was going to use to seal up the lacquer color but I didn't like the way it looked after a few coats--it didn't go on smooth, in fact quite the opposite, and was not shiny at all. Not sure what happened--what I did wrong--wrong settings in my airbrush? Wrong pressure on my new compressor? Don't know....I ended up sanding it down, putting on a few more color coats of MCW Hemi Orange and calling it a day for color coats.

I was going to use Tamiya TS13 lacquer clearcoat, but after much reading online about Tamiya clearcoats, I figured there was a chance the lacquer on lacquer could destroy the decals (maybe), crack and craze and split after 6 months of drying(maybe) and even react adversely with the MCW lacquer color coats (maybe). In the end I resorted to "Future Floor Polish" Acrylic covering, which is a trusty standby that I have used a few times for other builds such as the Texas Old School Rod.

I have never seen it react badly with any paint, provided the color coat was really, really dry. I brushed on a thick coat (Brushing looks better to me than airbrushing--it's self levelling and brushing gets a nice heavy coat) and after 8 hours put on a second coat. Now I can see the end of the tunnel on this build! But I said that before! 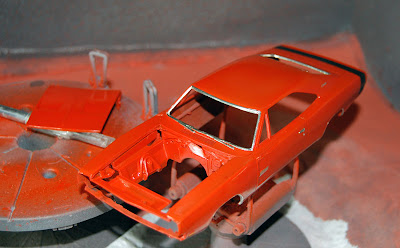 So here's what I have so far. Have I been here before? Yes. has it all been worth it? Maybe. I do this to relax and get my mind off of other things. But that doesn't account for my wife yelling at me for getting EasyOff on the lawn, or having to buy paint and decals (again) and redoing the body prep work (again) and priming and painting (again) and clearcoating (again). But is it fun? Does it make me happy? Yes, building these silly bits out of plastic and metal, that mean so little in the grand scheme of things, still does that.
Posted by Charlie Lamm at 6:55 PM