Casting Continued--the Good, the Bad, and the Ugly


The quest to build more Mopars remains on hold....I'm waiting for our UPS guy to deliver Resin parts for the 71 Roadrunner project and vinyl textured paint for the '69 Superbee.....

As I said last time, I've never tried to recreate a vinyl roof before, and I didn't want to try this out on an expensive resin body, so I got a '69 Revell Superbee that I'm building box-stock to learn more about creating a fake vinyl top. I've painted the body already with Model Car World #6955, "Seafoam Turp. Metallic" purchased for the Charger 500 project but never used until now....

I masked off everything but the roof....the brightwork had to be masked as well, I figure, since Bare Metal Foil reveals every little bump and pit and would look terrible covering scale vinyl. Ironically I used Bare Metal foil as the mask for the eventual application of--Bare Metal Foil! Overall this vinyl top thing is a mystery; I have no idea how this is going to look, but that's what $12 box-stock builds are for, for me anyway: trying out new things. 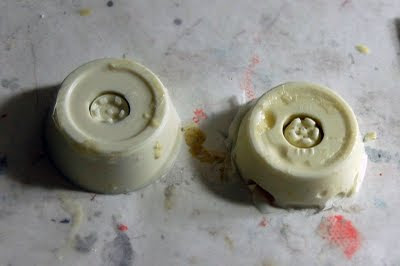 In the meantime I've been messing with more resin casting. Last week I bought a starter kit from Alumilite and have spent a lot of this weekend playing around with it, casting more Halibrand wheels and a bunch of valve covers.

For the wheels: I found a few deep rear 5 spoke Halibrands in my parts box. I always have loved these wheels, but each was missing its mate, and one of them had a pretty big chip taken out of the rim. I repaired the rim by stripping the chrome with 91% isopropyl alcohol, then using Plastic Weld, tube styrene, and a file to replace the missing chunk. But what about its mate? We need 2 wheels Scotty!!

First and foremost, mix the resin components really carefully! Or else the resin never quite cures and you end up with wheels that looked chewed by a dog!

Also: make sure to deform the mold right after pouring the resin to allow the resin to flow down into all the creases and crevices.

And let the part cure in the mold a long time--a few hours, at least--it takes the rims of the wheels a lot longer to cure than the rest....I was taking the part out of the mold, but the rim was staying behind, which of course is not good....letting the cast wheel sit in the mold for a few hours seems to fix this. 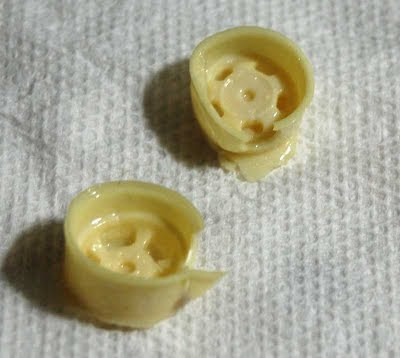 Another trick: glue the original part down to the bottom of the mold box--if not it will literally float--then the cast part will not be able to be extracted from the mold.

And....small round salsa containers, from the "para llevar" counter at the local Mexican joint, make great mold boxes for small one piece molds.

Putting the mold in the microwave and using baby powder to get rid of air bubbles, before the pour, didn't make a lot of different I could see, at least so far. The Alumilite site says to do this, but I couldn't see any difference, and occasionally the baby powder would deform the piece. As long as I could pop air bubbles with a toothpick before the resin hardened I was OK, for the most part. What air bubbles were left--and there usually weren't a lot--didn't seem that hard to fill with superglue. 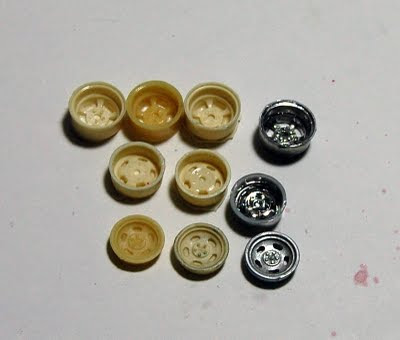 As far as the wheels, I had about 50/50 results--meaning I could keep about half of what I cast, which isn't too bad for a newbie at this. The takeaway: I could repair an original wheel and then cast a mate, and then use both on a build! Cool! 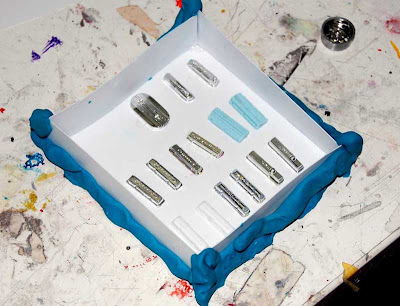 For the valve covers I went into my parts box and got every "cool" valve cover I could find--and a cool Thunderbird air cleaner to boot. We're talking the Caddie valve covers that say "Cadillac", Dodge Red Ram, Weiand, Ford Cobra, and so on--the nifty covers the kit manufacturers don't include these days because they don't want to pay GM or whoever an (even huger) licensing fee.

I whipped up a quickie mold box out of .015 plastic sheet, CA glue, and polymer clay. 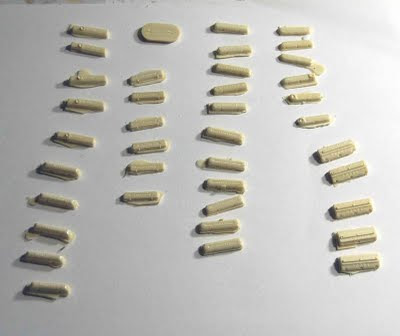 The results were really good! I had about 90% keepers for the 3 rounds. The parts, other than needing to have flash trimmed off, look every bit as good as the originals. These would go for $3-5 or more per pair (!!!) from one of the aftermarket resin places. For me, it was about 50 cents worth of resin and about 1/2 hour of my time to make a lifetime supply of them!!!!

I did try some 2 part molds this week as well, but it was a complete disaster. More on that next time. Overall, casting is easier than I thought, at least for simple things, and going forward I see it changing the way I approach a lot of the builds I do.
Posted by Charlie Lamm at 11:22 AM