Roadrunner on Hold--so in the Meantime.....

After a lot of sitting around staring at the 1:25 MPC 71 Roadrunner MPC body I have decided that it's going to be too much work to modify the body and front grille/bumper to suit my needs. I love MPC, I really do, but this body just doesn't get it done--it is too far from the spirit of the 1:1 car, so I'm not going to use it for the '71 Roadrunner build.

I'm not giving up; I have ordered some resin parts from Modelhaus and Bandit Resins to get the '71 Roadrunner build done....so now I'm waiting for the parts to show up, then decide what to do next. 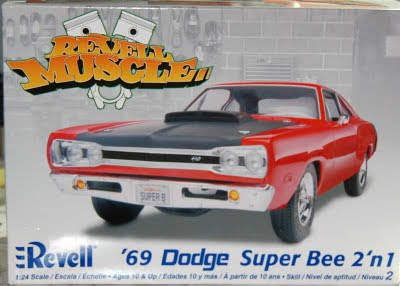 In the meantime I have been building a "box stock" '69 Superbee in 1:24 scale...Revell 85-2363....I don't normally work in this scale so it makes it more likely I will stick to a stock build--and I need to build box stock now and then to see if my basic skills are improving. Also I wanted to practice creating a vinyl roof, having never tried that before. This kit serves as a better test bed for this than a $45 resin body. 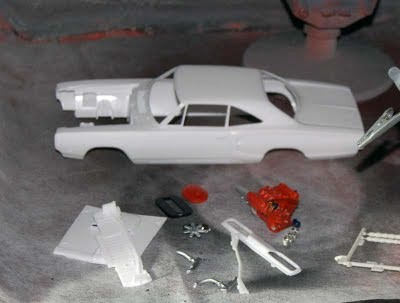 Things are progressing OK on the Superbee but I remain a bit unchallenged by a stock build and find myself at times a bit bored and impatient. I also see an awful lot of really, really good scale muscle car builds all over the place; the hobby forums are full of them, with one Revell 1:24 69 Superbee build better than the next. It seems some of the very best builders build lots of muscle cars. It's a bit intimidating.

However, I'm doing everything I can to keep boredom and intimidation out of my hobby life, so it's on to other things while I figure out what to do about the MPC Roadrunner situation.

So....I have been reading up on casting resin parts. As with so many other things these days, the Internet makes it all easy. Like the crazy world of polymer clays crafts: there is an entire Internet universe devoted to all aspects of casting--and this casting universe is totally and completely nuts. You can spend your entire life doing nothing but casting or for that matter just reading about casting; and of course being able to cast small and large items has 1001 uses to almost every hobby or craft as well as many professions.

So what am I waiting for? I got a "starter" resin casting kit from Alumilite and plucked some random parts out of the parts box to get some casting practice. 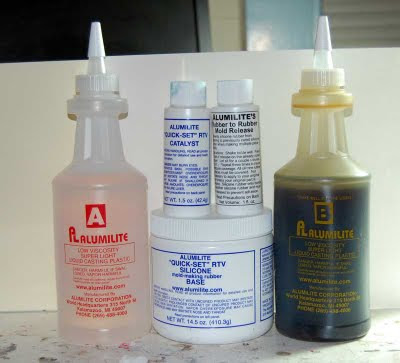 The Alumilite starter kit has everything needed to, well, get started. To do my first single mold casts I followed the how-to directions on the Aluminite site, combined with some reading on various casting forums. 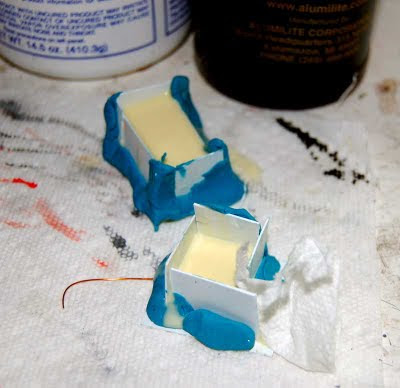 For mold boxes I used some scrap plastic I had lying around; I didn't cover the seams very well on one of the mold boxes but thankfully not too much Silicon spoo bubbled out. 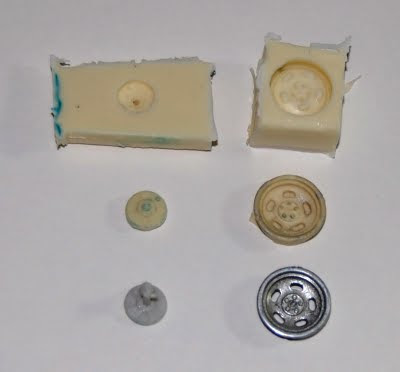 So here are the 2 pieces cast so far. The Halibrand type front wheel came out a lot better than I expected; I lost the master cylinder but the vacuum boost part came out really well. Overall, I did a lot better than I thought I would for a first effort--it was really pretty easy.

Next up: a two part mold--casting a turbocharger from a CART racer, a rare part that would be very useful for custom builds. Step one is to mold the "back" of the part, then flip the mold box, remove the clay, and create the mold for the front. Exactly how I am going to cut holes to get the resin down into this two part mold escapes me now, but maybe I will figure it out. Overall casting with 2 part molds looks to me to be exponentially more difficult, so I'm really not expecting much the first time out.
Posted by Charlie Lamm at 9:39 AM