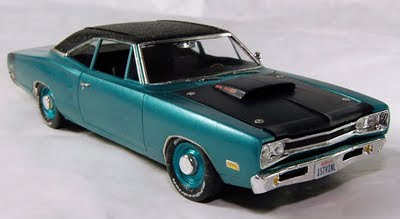 This kit was a departure for me--it's 1:24 and I haven't built anything in 1:24 for years; I did almost no customizing or scratch building, and I tried, for the first time, doing a scale vinyl top.

The engine compartment was detailed out with scratch built heater plumbing. I also cast the wiper motor and a few goodies on the inside of the firewall, as the Revell kit didn't have much detail.... 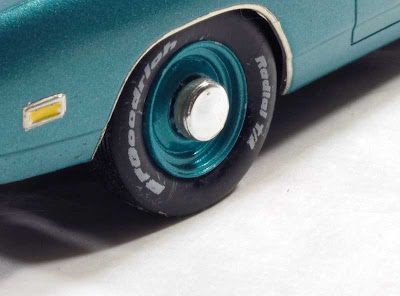 The tires and "Mopar Dog Dish" wheels came from "Scale Equipment Ltd".....it might be a bit hard to tell from the photos but the decals on the tires didn't come out very well--the edges of the decals are visible if held into the light just right (or "just wrong"). I don't think I will be using tire decals again any time soon; rub on lettering looks a lot better.

OK, so here's the top...after a lot of reading I decided to give Model Masters "Black Vinyl Top Base Coat" and "Black Vinyl Top Texture Coat" a try. It came out OK....but to me the "bumps" aren't to scale (I may have held the texture coat can too far from the subject, but, I did follow the directions from Testors and held the can 18"-24" away). I also made the seams a bit too big....I need to use smaller gauge plastic rod next time. 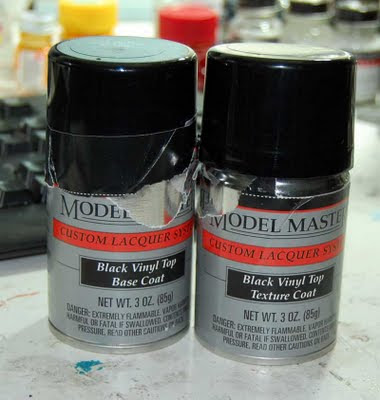 Does it look better than just using mist coats of enamel? Don't know....The finished build got a bit rushed towards the end; I had a heck of a time with the stance, since Revell's stock build looked WAY too tall to me. I ended up hacking up the suspensions and just epoxying the wheels to the axles after putting in some styrene rod to allow the stance to be lowered. 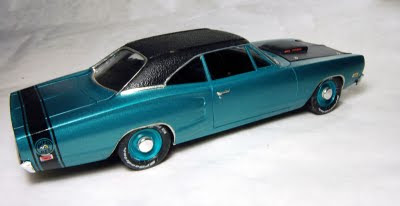 The stance could come down a tad more--not sure--1:1 photos shows these things riding up a bit high..... 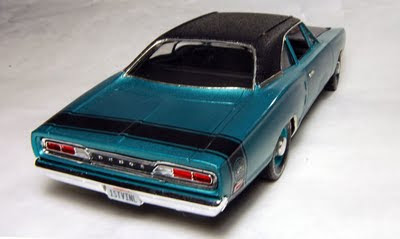 Don't know what I'm going to build next--I have parts now for the Roadrunner, as well as a Duster, but I guess I am not crazy about building yet another Mopar. In fact, I am going to go out of town for a few weeks and take a break from work and hobbies. Maybe after that I will have some new ideas.
Posted by Charlie Lamm at 5:40 PM

Great job on the model. I think the vinyl top looks great, and the paint is very good. Saw your blog feed on SAE forum.