Another troubled day in my model car world. From previous posts: I am trying to build a "vintage" 71 Roadrunner in 1:25 scale. The build in 1:24 scale would be easy--go to the local Hobby shop, buy the Revell 1:24 1971 GTX kit, and build it. But what fun would that be? There is, or was, a 1:25 resin body available, from Bandit Resins, so I scooped it up. It's a nice body: they already kludged a good firewall/engine compartment in there while mastering it. The BR resin kit is not too cheap--I paid about $45 for the body/hood/interior tub/seats/dash; if you get it, you still need a donor kit (Bandit recommends the AMT 71 Charger) to complete the build. 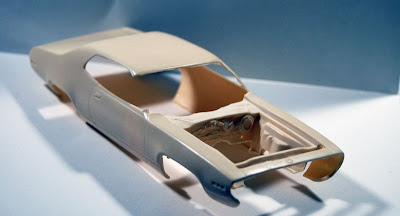 Here's what I ended up with. The body itself looks a whole lot like the MPC body I already have--it wouldn't surprise me if the MPC kit was the master, or they were both mastered from the same "promo" body at one point. And!! While trying to test fit the body to the donor kit (AMT/Ertl 71 Dodge Charger #30054, no longer in production, but easily found on Ebay), disaster struck: a big crack developed in the rear passenger side quarter panel, probably when I tried to stretch the body over the chassis. Lesson learned--be gentle with resin bodies! I tried to repair that with CA glue, which warped the entire body, and then I tried to repair the warpage with warm water and twisting, which popped the passenger side A piller off. Then I gave up; bottom line: the resin body is toast. When I told this sad story to my wife she couldn't believe I didn't scream when the A piller went flying. Well, I didn't, I must be getting mellow in my old age! 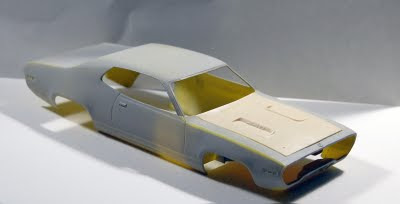 Oh well, the plastic body will work; I am going to use the hood from the resin kit which doesn't have the air grabber scoop arrangement...which I like better. I debonded the air grabber hood that I had already glued down and removed it; happily the engine compartment I had shoved in there was intact, so at least at this time I have options. I still need to decide if I want to glue the hood shut. I should put an engine and hinged hood into the build, but, that would be a pretty big time commitment. 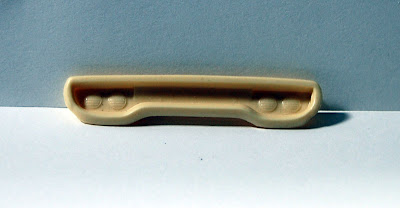 The bumper looks like it's about 2 scale inches less deep than the 1:1 bumper; there are also no bumper mounting bolt covers visible. And, to my eyes, the headlights aren't large enough. We can do better. 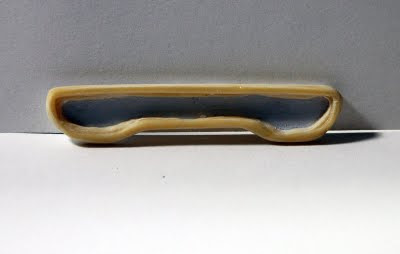 So here's the bumper I created, so far; I cast this from a 71 Plymouth stock car bumper I got from Competition Resins, and then cut out the grille using a dremel tool, leaving a bit of the original grille behind to have something to mount the new grille to. 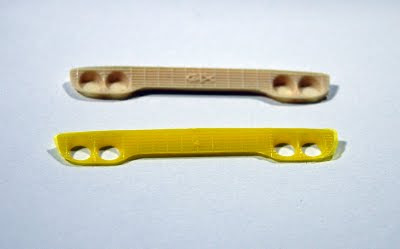 I have to figure out the headlights and grille next. The Bandit Resins GTX grille is the top one; the other is the MPC grille. I am not too crazy about either but overall like the Bandit Resin's one better (although it's a GTX, not a Roadrunner....) Best would be to scratch build this somehow, but that would be a pretty big project. My biggest challenge right now is how to do this build in the time I have; I am very busy with about a million other things. I may have to take the quick way out.
Posted by Charlie Lamm at 7:25 PM