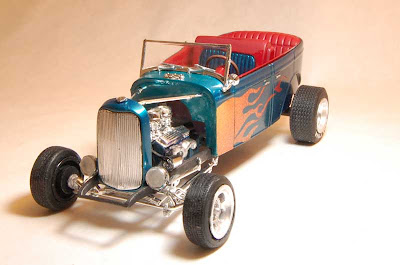 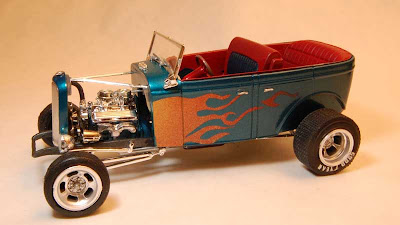 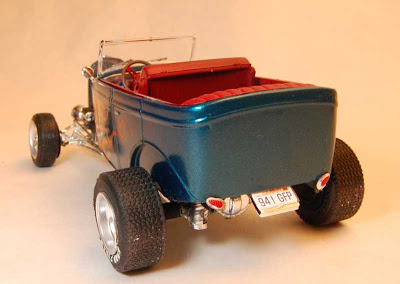 This is something I wasn't going to build but ended up getting built anyway.... between my other projects I decided to learn about painting flames, and this is what I came up with.....This isn't my first flame job; it's actually the 3rd I've tried, but the first two results were so bad that I pitched them.

Flames are tricky I am finding, especially at 1/25th scale. I have never liked flame decals (they look really fake) but working in a tiny scale like this with nothing but an airbrush and my poor, far sighted eyes is one of the harder things I've tried to do so far.

I read somewhere that to do flame jobs you need a mask, and the mask that's affordable is called "Frisket Film" at a few bucks for several sheets. To me it seems like clear plastic that's tacky on one side.

After some trial and error, I found this technique worked for me:

a) paint the undercoats of the flames. For me, I used Duplicolor primer, followed by duplicolor yellow and red, starting with yellow (it came out more orange) drifting to orange and then red, front to back. I sprayed the lacquer right into the cup of my Badger #200 airbrush. Not pretty but it worked.

b) Draw the flame style you want on the Frisket. I used a sharpee (fine point) and used decals and photos as a guide to draw the flames on the frisket. This was harder than I thought--not all flames look good and there was some trial and error to get a realistic looking flame drawing on the frisket, in the right size and all. One thing I noticed is that good looking flames look like they're being blown by the wind--seems obvious right?--so the "tips" of the flames have to line up with the ground, as if wind is sweeping over the body. Also, it's important to stick a few "orphan flames" in there--ones that aren't hooked to the main body of flames--this is a trick used often on 1:1 cars and looks good. Let it dry--it's lacquer and it should dry fast.

b.5) stick the frisket to the body.

c) Take a **very** sharp #11 exacto and carefully cut out the flames. You want to leave the flames masked and the rest of the body unmasked. No, you can't cut the flames first and then put them down, and yes, if you press too hard you will nick/scratch the body. For me it took some practice to get this.

d) I rebasecoated the non-flames and then laid down the color coat. Now, I read somewhere (no link--sorry) that you should shoot some paint or clear into the frisket seams to seal the frisket down, but, that didn't work for me--on failures #1 and #2I ended up with lumpy garbage under the Frisket. What I found is that by shooting away from the frisket film--angling the paint stream in the opposite direction as the mask--nothing leaked under. And at least on this body the Frisket film stuck a lot better than I thought. However, the 32 ford is very flat, body panel wise, so this relatively easy. On the first failed attempt I used a 58 caddie, which had a pretty complex shape to the front end, and it was much harder to stick the frisket down so paint didn't get under it and I ended up with some leaks and runs. I don't have an answer for this yet.....

e) Remove the Frisket as soon as you can. If you wait too long the paint will chip (Duplicolor Lacquer to me seems very brittle).

f) Coat with Krylon Crystal Clear, about 3 thick coats. It levels well. Then I polished/waxed with 2000 Sandpaper and some Meguilar's #7 and #24. 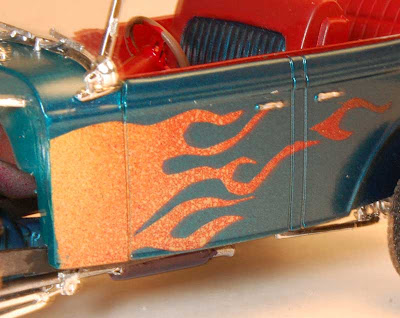 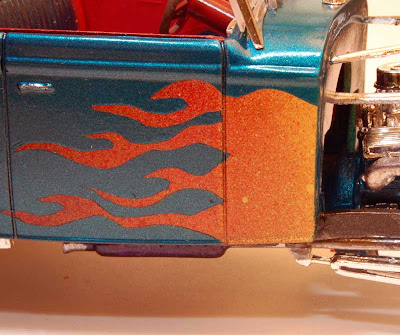 The flames came out pretty well, not bad for a 3rd attempt I think. I want to figure out a way to put an outline around the flames, to resemble a 1:1 pinstripe, but I haven't figured that one out yet. If anyone knows comment or email me. I will send you a motor or something from my junk box. 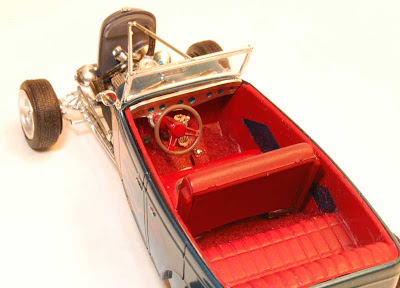 For the interior I used Bare Metal Foil on the entire dash and them some Tamiya Blue Clear acrylic in the gauge faces. It doesn't look bad from far away, but I should have worked harder on this. The carpeting is Softflock laid down the "normal" way--with white glue--it had to look top notch since the interior is exposed on this model. 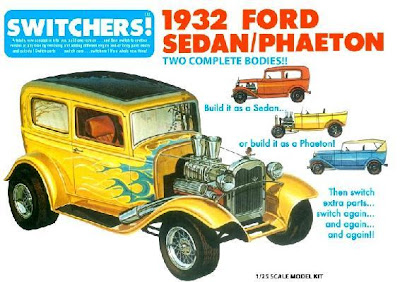 Here is the kit this is based upon. The "switchers" kits are an odd hybrid of snap kit and glue kit. I had no desire to be taking stuff on and off a finished model so I glued down everything. I understand the tooling is based on an old MPC design. Overall, it's not a bad kit--in fact, it's a darn good kit--but there are some problems. The hood didn't fit at all--it was unusable really--so I left it off. The tires were somewhat tractor-like, not the right size/shape at all so I got rid of the fronts and used junk box tires instead. I used the kit back tires but that probably was a mistake--they are a bit small IMO. As with a lot of other AMT/MPC kits you do get a lot of extra parts--including an extra body in this case--but to my surprise not much "bling" like rear view mirrors, gas filler caps, windshield wipers, license plate holders, or whatever. Those along with all the other accessories came out of the junk box, which I had thankfully sorted previously, so I had a whole baggie of body accessory bling to choose from when finishing this kit. And adding the bling made a huge difference as to how the finished model looked--it made it a lot more realistic and fun looking.

I couldn't find the right windshield wipers so I scratch built them from styrene rod....and painted with Tamiya chrome silver acrylic--they didn't come out too bad. 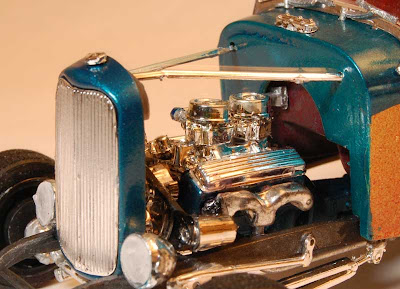 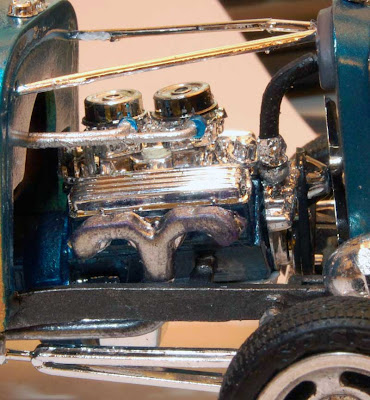 I used the block and tranny out of the "Switchers" kit but the blower/intakes etc seemed pretty out of place for an "Old Skool" highboy (it seems to me that every 60's/70's AMT/MPC type kit had a blower!), so I stole some Chevy intake manifold parts/carbs/aircleaners, as well as the belt/pulleys and fan, off a small block Chevy Revell Parts Pack I bought on ebay. The pipes--and I really like the headers/pipes on this Switchers kit, were treated to Alclad II (See Jan 08 posts on Alclad II--you will see the pipes/headers from this kit in those posts).

Overall a fun build, and I had lots of leftover parts that will undoubtably see the light of day on future hot rod builds, if you are into hot rods this is a good kit to buy.
Posted by Charlie Lamm at 10:28 AM