I always admire the great looking pearl interiors made by modelers who get their pictures in magazines and whatnot, but, to date my attempts at this have looked pretty bad.

Not one to give up right away, I checked out some new paints at the art store by Jacquard. I read a lot about folks putting the Jacquard product "PearlEX" into their clears and whatnot--here's a great link from Scale Auto Mag about just that. 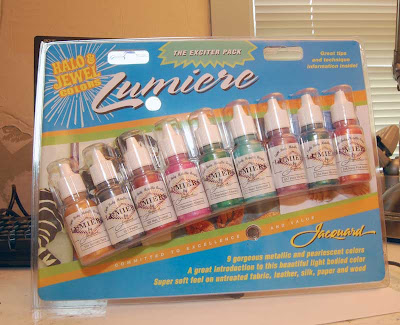 But a trip to the art store or the Jacquard site reveals that these guys make a ton of paints and other products besides PearlEX. My local art store had some Jacquard "Exciter Packs" for 20% off--there are samplers of many of their different paints in 14ml itty bitty bottles--so I figured what the heck and bought some. 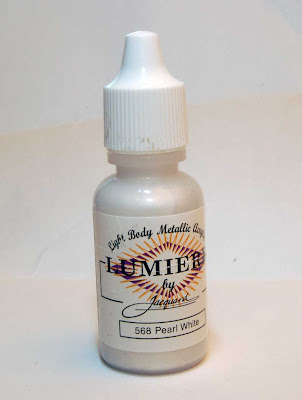 The first paint I ripped out of the blister-pack was the #568 Pearl White. (Here's my big chance to do a pearl interior that doesn't look like enamel dog poo!) I primed the 64 Impala interior with Duplicolor sandable white and away I went. Next I sprayed some Tamiya white acrylic (#X2) 50% with 50% isopropyl alcohol over the primer as a basecoat. Finally I mixed up the Jacquard pearl white with alcohol (which works with Tamiya acrylics) and man, what a mess. The paint totally clogged my airbrush! I figured I had used the wrong thinner....time to read the directions!

Turns out you thin Lumiere paints with water, so I washed out the airbrush and started over. This time I squirted some of the paint into the cup of my Badger #200 airbrush and poured a thimble of water in there (the ratio is supposed to be 3/4 paint to 1/4 water--which after some experimentation turns out to be about right). I got some clogging again so got a tiny paint stick and stirred up the cup and it worked! (next time--mental note--mix the paint OUTSIDE the cup! Doh!!!)

The result is gorgeous pearl--I mean, totally pearl like, a bit grey/silver, very smooth, beautiful. Someone at Jacquard knows what he or she is doing--this is really nice looking paint!

I wanted to paint the insides of the seat (the "tuck and roll") yellow to offset it from white the but at first I made a bit of a mess at first--I used Tamiya yellow clear and some blue "The Detailer" fluid to bring out the "grooves" and tried to stay within the lines of the center of the seats....but that didn't work, as some of the "detailer" ran over the boundries no matter how careful I was. 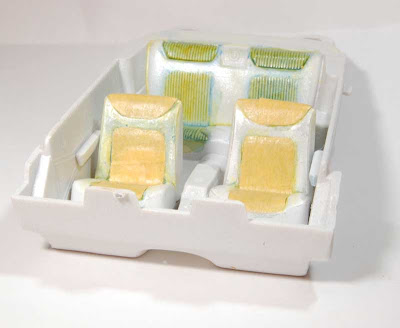 So I masked off the area I wanted to stay painted and tried covering up with more of the pearl. Sort of like I'd do with flames.....


Here's what I found:

--It's really hard to cover yellow and blue with white pearl. It took a few coats, and the Lumiere doesn't cover that well. Best to try to make it as much paint and as little water as you can and not have it clog the airbrush.
--The boundry between the yellow and white looked crappy, so I took a yellow art pencil and after outlining the edges of the yellow with yellow pencil covered the whole thing with Tamiya acrylic clear.
--Don't brush the lumiere on if you can help it--it dries clumpy.
--The Lumiere sands out well (I used 600 and 2000 grit to fix a few problems and it worked--some of the lumps and bumps disappeared).
--Liquid mask pulls the Lumiere off (did for me anyway) leaving the basecoat intact. I probably should have sanded the primer and basecoat better before laying down the Lumiere.
--The Lumiere was hard to clean out of the airbrush. I had to do a lot of scrubbing with a toothbrush to get it out. I ended up using a paint sprayer at the end (you just hook the mixing bottle up to the bottom and spray) as I got tired of cleaning out the Badger after each coat.
--Lumiere has no fumes or smell I can tell--to me it seems safe compared to say, Krylon Crystal Clear or Duplicolor lacquer, in terms of gag-n-fumes type things. I am not saying you should use it without a respirator, but, it won't stink up the house. 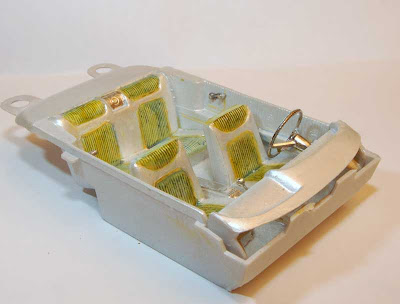 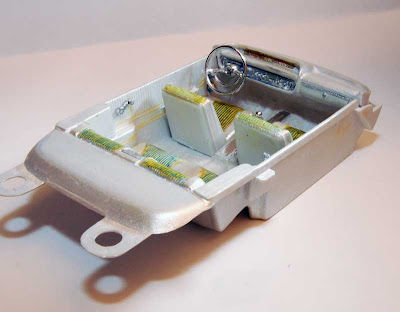 Well, it was a fair amount of work here's what I came up with. Yes, this could be "cleaner" but I am not one of the modelers who takes forever on a single project--it has to remain fun....also, I never retouch photos, so what you see here is how it really looks. 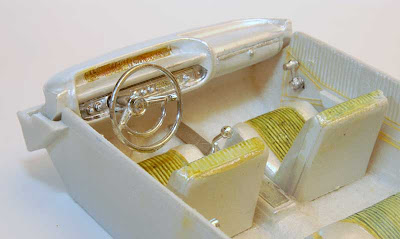 For the dash I masked all but the lower part with Tamiya masking tape, sprayed on Black Testors enamel, let it dry, and put on a thin coat Alclad II sprayed through an airbrush. I then went through with a toothpick and added some details here and there. The blue detailer enhanced the glovebox lines....I am finding enhancing (deepening/blackening) lines like this makes a huge different in the overall look of the finished model.
Posted by Charlie Lamm at 9:01 AM