Still working on the 64 Impala. I have a really cool project to do next but I'm trying not to rush through this one.

As I said earlier, the 63 Ford came out pretty well, so I am doing a Chevy Equivalent. This is the AMT/ERTL 64 Chevy Impala that's been around forever. Last time I built the interior and finished it with Acrylic Pearl White from Jacquard.

Since I liked that paint so much I went to my favorite art supply website, dickblick.com, and ordered up some PearlEX and Acrylic Transparents. 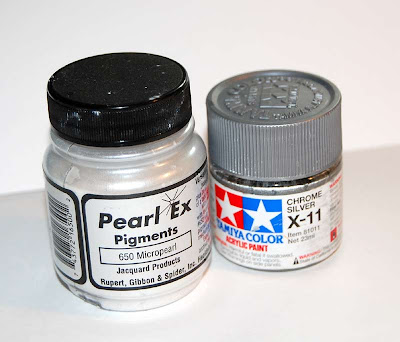 OK, here's how I painted the body. The model got the usual water and dish soap and toothbrush treatment followed by 2 coats of Duplicolor Sandable Primer. For the basecoat, I copied pretty much what I did last time on the Ford: 50% Acrylic Chrome silver from Tamiya, with 50% alcohol, but this time I put a pinch of Jacquard PearlEX MicroPearl in there. This didn't come out as I expected; in inside light the pearl looked more like white dust then pearl. No worries; I sanded it out a bit with 2000 grit sandpaper and thinned out the basecoat to about 30% color and 70% thinner and resprayed. The pearl was still there but now didn't look so "dusty". 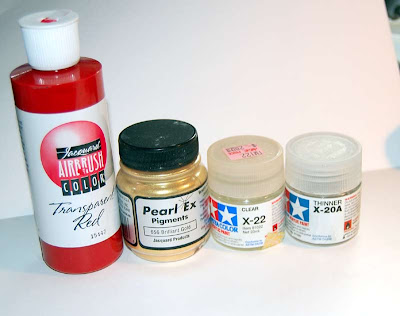 After a quick dry, I poured Jacquard Transparent Airbrush Red right into the cup of a Badger 200 airbrush and started spraying. As advertised, the paint covered quickly and evenly and required no thinning or messing around to get it to flow perfectly with the airbrush. About 3 coats, about 10 minutes apart, were all I needed to cover the undercoat. It came out beautifully--rich and even, not too see-through, but still a bit "candy" looking if held to the right sort of light. I am sold on this Jacquard stuff--for what we do these guys rule the school!!

Unlike the 63 ford the flakes from the basecoat didn't show through as much as I wanted so I mixed up some Gold PearlEX (just a tad), some Tamiya clear (50%), and some Tamiya thinner (50%). I misted a few light coats of this over the whole thing using the same Badger 200 airbrush I am using for a lot of things lately (because it's simple, it works, and it's easy to take apart and clean).

I am finding the PearlEX gold flakes show up best in outdoor light, so I took 2 pix for this posting--one inside in my paintbooth and one outside. You might be able to see a bit of difference between the two--I am not a good enough photographer to reveal what it looks like with different lighting in a dramatic way....but in the real world it seems to me to look remarkably different in whatever light you see it --sometimes very metal-flakey, sometimes very candy, sometimes a brick red sort of pastel look. It's impressive and yet subtle at the same time. I am anxious to mess around with Jacquard's most excellent paints a lot more.
Posted by Charlie Lamm at 11:41 AM

What up C' its me Tito just droppin in on ya. Thats what im talkin bout right there. Im a Chevy Boi all the way and that paint jus pops right at ya!! Will it be a pro-tourer or a pavement scrapper! Keep me posted! All in All keep on wit the keepin on!!
Your Bro in plastic and paint!
T"