Last week I was gathering up parts for a '29 Ford Hot Rod, with an emphasis on kitbashing rather than a lot of customizing and/or scratchbuilding. I have learned from previous mistakes (read: glue bombs) that a lot of test fitting and planning has to go into a kitbash.

This kitbash is going together smoothly so far, due to the fact that most parts from the 1929-1932 Ford Era are fairly interchangable. As far as "engineering" this the only hard thing I've tried (and it's not done yet) is to marry a windshield from a Lindberg Auburn kit to the 29 Model A body. For that my main concern was having no good way to glue on the windshield so I built up a "target" for it using styrene rod. We'll see if it works or not. 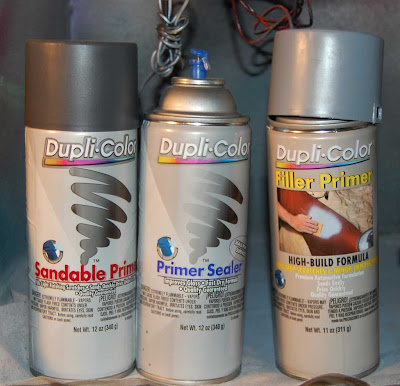 I am trying to learn about what sort of primer is right for what, so I went to the auto store and bought the three you see here. I have used the Duplicolor sandable primer many times and I like it; it covers evenly and dries very fast. I used the "filler" primer on the Z'd frame since I didn't spend days sanding the frame sides to look smooth--the idea being that it glops over any little cracks or dents that I didn't spend enough time sanding out. Let's see if it works as advertised.

The sealer--I am really not sure I needed that, but, I couldn't see how sealing the primer before painting was going to hurt any, so a coat went on the body and the radiator shell. I have seen the sandable primer show impressions of where the chassis was puttied, and I imagine this sealer stuff will cover over that, but we will see. 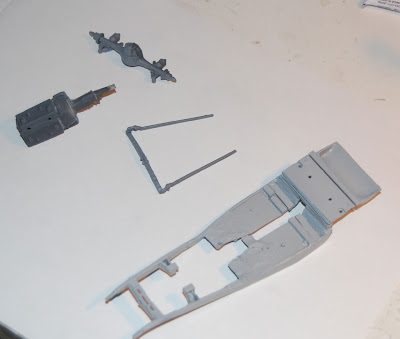 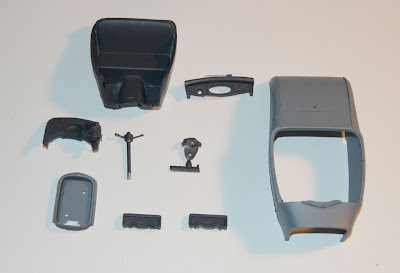 Hard to believe that a few evenings went into this, but, it did. Planning and test fitting is time consuming!! The radius arms and leaf spring for the front are the from a 37 Ford pickup kit (see last time for the main kits I "bashed" from). I cut open the radial arms at their apex and spread them out, which I have been told 1:1 hot rodders did this mod on many a Ford hot rod throughout the years.

I cut the interior tranny hump for the of an unknown 1:24 kit in the scrapbox and glued it in with gap closing CA. After drying (which was quick) I noticed that it didn't go in flat, and removing and repositioning it is now impossible. Oh well, it's not noticable when the interior is in the body shell, but, I have to remember to be careful when affixing things with CA, as, there is no going back--I tried using CA debonder for this a couple of builds ago and made a big melted mess out of the whole thing, so I am cautious about that now..

The dash came out of the Revell Good Guy's 32 ford kit but had to be pretty heavily altered to fit the 29 Model A interior. I also added some tabs using CA glue to make it so I have a way to glue it into the interior.

Now I have to figure out how I want to paint this. My gut feeling is to just use metalflake lacquer and be done with it--I have to start the "real" Model A hot rod project in about 3 weeks, so this one is just for fun before the really tough project begins, so I am not going to go crazy trying out yet another way to paint a body.
Posted by Charlie Lamm at 4:51 PM