I am not getting too much positive feedback about the 29 Ford Kitbash....perhaps I rushed through the build too fast and it shows too much. Oh well. I have to keep rethinking why it was I started up this hobby again. The primary goal is to find some relaxation, and I still feel that spending hours and hours and hours on a single part or assembly means I have become as obsessed about modeling as I have about other aspects of my life, and that would not be a good thing.

On to this post's main topic: Devcon Epoxy 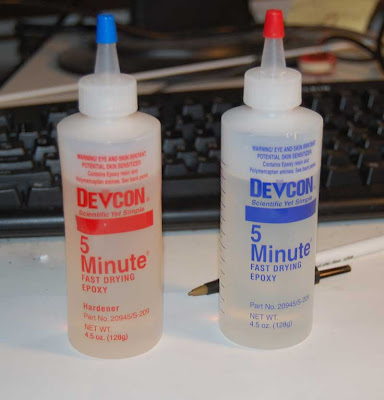 As a modeler who is maybe in too much of a rush, I am looking for fast ways to glue things up. In my young years I used a lot of tubes of the "stinky red" Testors glue, which was pretty good on the sticky scale, but was stringy, left a big mess, and sometimes didn't get the job fully done. And it stank really, really bad.


Enter Epoxies. I was looking for something sticky (so when I placed a part it wouldn't immediately fall off). CA glue is good for some things, but, it's not sticky--it runs like water, for the most part. I was using Ace Hardware's Epoxy but it dried a bit yellow, and the tubes got nasty after a few uses, getting Epoxy goo all over my hands each time I used it. On a web modeler site I read about Devcon: easy to use and dries clear so I mail ordered some, and started using it about 2/3rds of the way through the 29 Ford project.

I am sold on this stuff. It indeed dries clear and fast. And a side discovery I made: For better or worse it does not stick to chrome.

In my rush to finish the 29 ford I deposited a big chunk on one of the valve covers, in my rush (and inexperience) to get the distributor wiring in. It really bugged me, and I thought about trying to cut off the valve cover and replace it with an unsoiled one from the parts box, but I CA glued the heck out of the part and it wasn't going to be easy to take off.

I took the blob in some tweazers, pulled, and to my amazement the entire chunk came off in a single piece--and the valve cover looked great!

But was this a fluke? 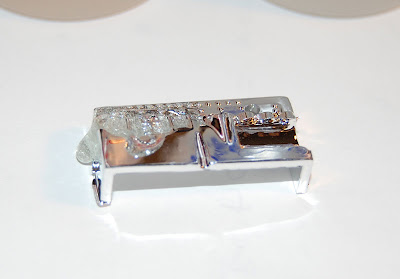 ......so I got the chome block out the left-over Lindberg Auburn (the one I took the Duval-becomes-Hallock windshield out of) and purposefully globbed a bunch of Epoxy on the side.

I let it dry for about 4 hours and then using tweezers removed it: 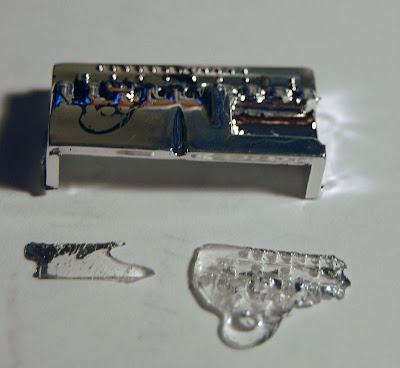 Again the whole blob came up--it was easily removed, really, but some of the chrome came up with it. Too much that I could do this on something serious (even my version of serious, which is less serious than a lot of other's version of serious) so perhaps the ability to recover from bad Devcon mistakes is limited.

It does make me remember that I will always have to scrape the chrome where I glue, just as I do with stinky red. Overall I am adding Devcon to my bag of glues, and it may become the franchise player. I am about to do my first project with resin and I understand Epoxy is the glue of choice for that. We'll see how it goes.
Posted by Charlie Lamm at 2:13 AM