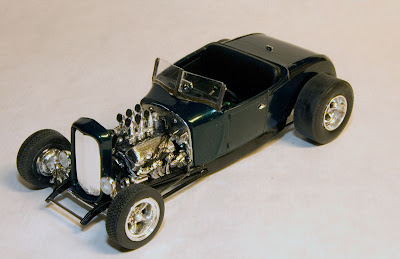 Another couple of weeks gone, and I haven't had as much relaxation time as usual. But in spite of long work weeks and little time at the bench the 29 Ford hot rod kitbash is pretty much done; I should still add some details to the underside (it has no mufflers right now for instance) but I will probably leave that for a rainy day....it's nice weather out right now so I am not anxious to flip the model over and keep working. 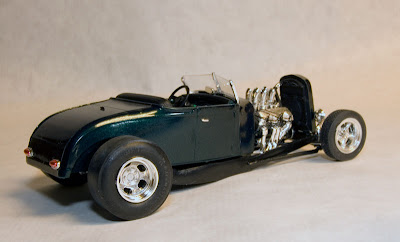 Modeling is a constant struggle between finding time to get things right and substandard results because I couldn't find the time. The more time I take the better things come out. But there are of course only so many hours in the day.

So on this build I spent a fair amount of time "engineering" how all the parts were going to fit together, modifying the frame to accommodate the engine block/headers/valve covers (which came BTW from the 57 Chevy "Boyd Coddington" kit AMT/Ertl #38251), figuring out how to fit the tie rods onto the front axle, and so on. But not enough time on paint, which is usually my favorite part of a build. 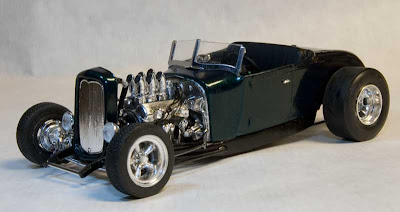 Thus, I should have spent more time polishing then I did. I used Duplicolor rattle can forest green since I was in a rush, and Krylon Crystal clear as the clearcoat--didn't even use the airbrush. But there you go. I spent about 1 hour polishing with 2000 grit sandpaper and then Tamiya polish, and it shows. It looks like an old time lacquer job--shiny from a distance--and my wife--who BTW is truly an angel walking the earth--says she loves the color, and that's good enough.

One of the things I wanted to try to learn on this build was what role the primers made in the finished look. I am sorry to say I didn't spend enough time painting and sweating the finish to come to any real conclusions. I did use "Primer Filler" on the frame rails and didn't spend a whole evening sanding them down after Z-ing the frame; it was more of a quick twice over with a few sanding sticks, and the frame rails came out looking good (I used duplicolor Gloss black Acrylic Enamel for the frame, and it looks good and smooth). So perhaps the filler helped a bit. 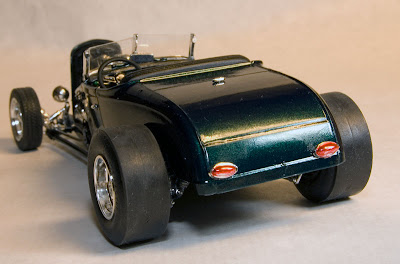 The hardest thing about this project was (first) getting all the pieces to fit "straight" and (second) making the Duval windshield look decent. I have built jigs and bought 90 degree angle weights and grids to work on and everything else I have read about, to make things come out "straight" like the real car, and my cars still come out with things a bit off-kelter. In this case the rear of the body sits about 3 scale inches too high on one side, but the front is fine. I have no idea how this happened, but once I epoxied down the body there seemed to be no way to go back. So I don't have an answer to that yet.

The windshield was another thing I never fully sorted out for this build. But again it came out pretty well, in spite of some real struggle. The one from the 29 Ford donor kit (AMT #6572) didn't work at all--it was too "model T" looking and made the car look too high. I jettisoned that during the early planning stages. As I mentioned last time I ended up using the windshield out of a Lindberg 35 Auburn Speedster, #72324. IMO the Lindberg kit is pretty junky (I noticed there is a photo of a 1:1 Auburn on the box art, and not a photo of a master-modeler built rendition of the Lindberg kit--and that's never a good sign). One of my complaints is that the windshield is pretty out of scale--the real car didn't have a fence-post sized solid chrome metal strip along the top edge of the windshield glass, for instance. So, I ended up doing a lot of surgery on the windshield's frame, and used some PET plastic for the window glass instead of the clear plastic Lindberg provided(which looked way too thick to me). So now it's a Hallock and not a Duval. Oh well.

How to glue the PET onto the "Duval" (well, sort of) chrome frame was another matter. I had a tough time, in spite of using G-S Hypo cement (the end all uber-clear glue which you can get from Micromark). The merits and problems with G-S Hypo are a discussion of its own and will be the topic of a later post. 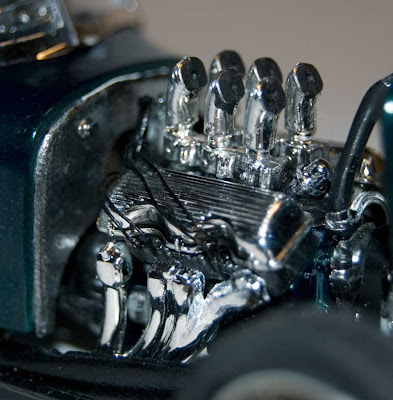 I was going to put a blower on the engine but it didn't look right, so I found a 6x2bbl carb setup from a really bad (bad chassis, flash and sag, bad tooling--really not a good kit at all) AMT 32 ford kit #38280 and used that. I just love 6 carb engines on 1:1 cars, but, man, I have a lot of trouble with building scale engines. They never come out looking very "straight" to me when build them, compared to photos of engines I see other modelers do that look, well, perfect. Maybe that's because I don't build them that often--I am the king of the curbside.

On this build, I had a really bad time with the distributor wires, so that's something I am going to work on more in the future. But I did discover "Devcon" 5 minute epoxy after reading about it on the scaleautomag.com forum; I was using Ace Hardware's Epoxy before, and Devcon's was lauded in the forum as a great improvement over generic 5 minute epoxy, and it is. Devcon is easier to mix and dries clearer, is sticky as anything and dries incredibly hard, so I am going to be using that from now on....And it appears to not stick to chrome, which saved my bacon on this engine...I had a big epoxy blob on one of the chrome valve covers (oops), but managed to pick the entire chunk off with some tweezers and left the underlying chrome intact! Lucky, and extremely satisfying!!! 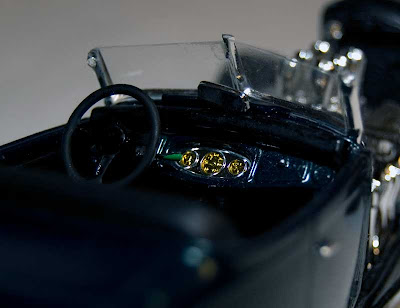 As I said last time I morphed a 32 Ford dash into the 29 body for this project. I took it easy on this interior and used the tub that came with the 29 Ford AMT kit, with the steering wheel/steering column stolen out of the 32 Ford Revell Kit. The gauges are finished with a blob of Tamiya clear yellow. Overall I ended up using a lot of parts out of the Revell "Good Guys" 32 Ford kit #85-2024 which I recommend highly--beautifully tooled, lots of detailing parts, and a lot of fun both as a parts donor kit or if you want to build a "box stock" 32 Ford hot rod.
Posted by Charlie Lamm at 2:18 PM