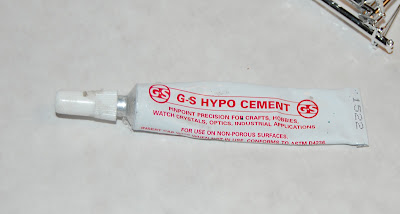 This has been a tough week. A combination with increasing dissatisfaction with the kitbash 29 Ford has crept in and I'm not sure why. I know I don't have time to spend endless hours on a hobby that I'm pursuing to take my mind off of other things. And yet if it's so casual why am I taking the time to write a blog about it? I must be more serious about this hobby then I'd like to admit....I will have to spend more time pondering this.

So onto this week's post. I have recently started using G-S Hypocement for any sort of "mission critical" finish or chrome gluing. Before I was trying to use clear enamel or superglue. I found G-S Hypo Cement on Micromark's site and decided to give it a try, and, after messing around with it a bit I came to the conclusion: this stuff works quite well.

But it's not foolproof. The directions advertise that you can "remove excess cement with alcohol". Well that sounds like a winner--try doing that with CA glue or Testor's stinky red. It won't work.

Glue that sticks stuff together but can be debonded with alcohol sounded too good to be true so I decided as usual to run some tests. First test was to put a big blob on an unused piece of plastic "glass" I had lying around. I have found neatly gluing glass to be one of the toughest and most frustrating things in this odd hobby, so if G-S helps with that I am all over it. 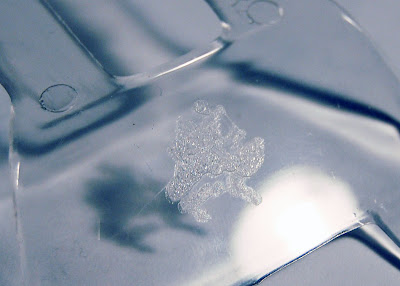 Well, if I used some alcohol right away (in the first few minutes after use) I could still see a faint trace of the glue left behind. Even if I put a bit on and immediately wiped it off with alcohol (I had a drenched qtip standing by) I could still see some "faint white dreck" on the glass. So at least for glass, G-S isn't foolproof--you have to treat it very carefully just like stinky red of CA glue--if you get it on the glass you're going to have to polish it out like other glues.

And if it drives at all you're really screwed! Alcohol will no longer remove it at all--not even a little bit--you end up with a huge white blob. 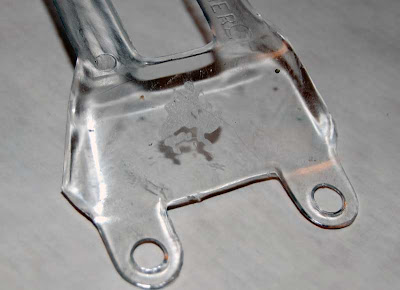 This is the same rear window after soaking in 70% isopropyl alcohol for 1 week. The GS stain simply would not come out. Soaking doesn't help!!! 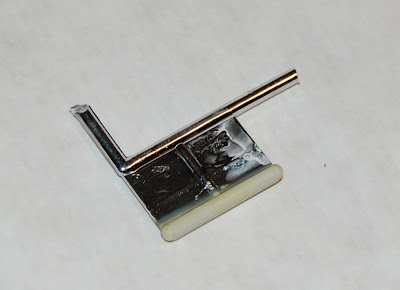 Chrome is a bit different. The G-S glue dries very clear if you don't muck with it too much. So even if you can't get it off you might be OK. I put some on a left over chrome sprue and let it dry. To my surprise the glue on the "tube" section of the sprue came off easily--I could rub it off with my thumb, and it left the chrome below in good shape. I c0uld not get it off the flat stuff though. It seems that if the chrome is a bit porous the stuff sticks. In this case there were some slight notches in the flat part of the sprue. However, for assembly chrome with G-S I am still going to scrape off the chrome where the glue is going to be applied if possible. 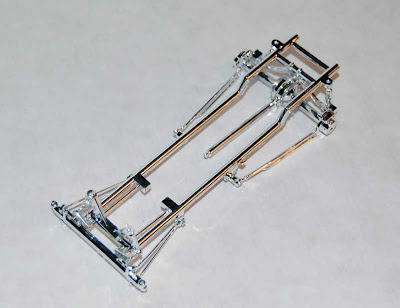 So here's the good news. This glue really helps. I am not the tidiest guy around and in assembling this chrome hot rod frame I did my usual blobs here and there (it's from an AMT parts pack and was not easy to assemble--lots of parts didn't fit and required trimming and bending). 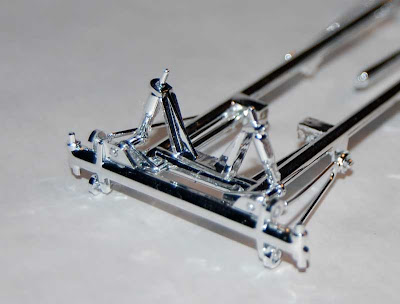 This would have been a huge mess if I couldn't use alcohol to clean up the G-S while it was still wet. As long as you work fairly fast, and keep in mind it doesn't stick too well to chrome, it's extremely useful stuff.