I swore off doing any more open-wheel hot rod builds and kitbashes for a few months, so I started on an AMT Chevy this week but found my mind drifting back into the world of old Ford Hot Rods. I was in Fort Lauderdale Florida a few weeks ago visiting relatives and some guy was tooling around the main drag in a candy purple 25-T. It inspired me to get out some of the Model T parts I've had around for a bit and try to do something like it.

So much for "swearing off" things. 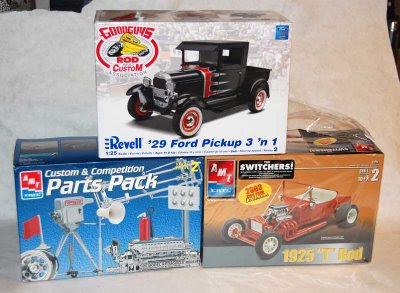 So this time I'm using the engine out of Revell's really fine 29 Ford Pickup #85-2085. Like some of the Revell '32 Ford efforts, if you're building early Ford hot rods in 1:25 scale this kit is a must-have--there are lots of great parts to steal for whatever. Also I'm using the cool all-chrome chassis I got from an AMT parts Pack #8435 "Custom and Competition". This Parts Pack isn't made any more as far as I know, but I found it on Ebay for about $20. Finally the body is coming out of AMT's "The Switchers" 1925 "T" Rod #38018. The box art on this kit is pretty ugly I think, but inside are some very nice old-school looking T parts. 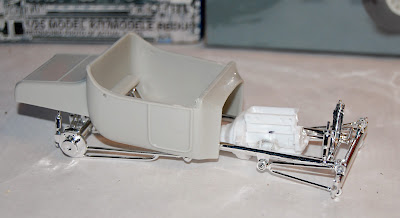 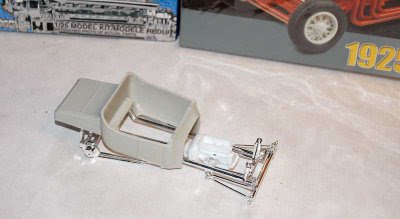 So here's what I have so far. I'm not doing as much prototyping before this build since I want to see if I am more creative if I use less planning (probably a bad idea, but I want to try different creative approaches to a build....). The initial look is what I'm after but I see tough times coming as far as getting the stance right and finding a good set of wheel/tires. The rear tires on the 1:1 rod in Florida were small in diameter but wide, wide, with tiny retro-drag-car fronts. This gave the 1:1 car a very slick look....as if it was ready to turn some 200MPH laps!

But...for the kitbash modelers of the world....where in the world can we find something like this at scale that will work? I might have to buy some old open wheel racers and toss everything but the tires?

And how will I glue them to the suspension, get them straight and true, and not make a mess? 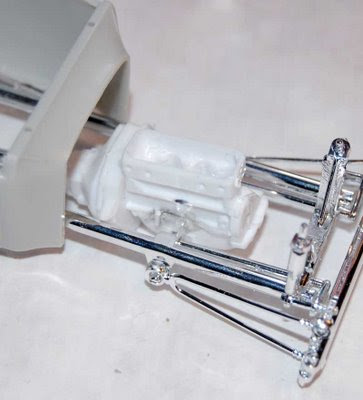 The four banger engine is a first for me--I have only built V-8s in the past so this should be a fun change. The motor mounts in the Part Pack frame mandate a ridiculously narrow block--maybe 8 scale inches wide if this were a 1:1 chassis--so I had to grind down the Ford block to make it fit, and add back some styrene rod, but, it should come out just fine.

I love this build!