25 Model T Kitbash--Paint it Up, Scotty 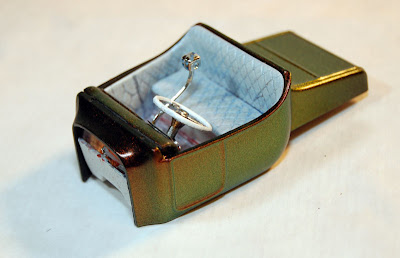 I had so much fun using Alclad's "Prismatic" paints on the last build that I just had to try it again. I thought and thought and thought about how I wanted to paint his build--two tone? Candy? Flames? But in the end I decided to do something pretty crazy with solid colors. 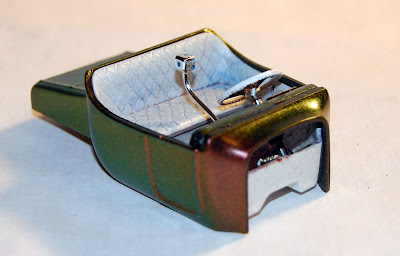 It's hard to represent the true effect of Prismatic paint using still photos....the paint turns bright red/copper when viewed from one angle and a sort of yellow-green when viewed from another. The amount of light makes a difference too--the red looks almost brown in lower light and bright fiery red in bright light. A dramatic effect, not something I'd want to use on every build but something fun and different to try once.

The body was primed with Duplicolor primer/sealer and then painted with 1 mist coat and 3 color coats of Duplicolor Enamel/Acrylic black. Then after 24 hours of drying time (the Duplicolor label said to wait 7 days but I just couldn't wait that long--impatient I know) I hit it with 2 coats of the Alclad #202 Prismatic Maple. 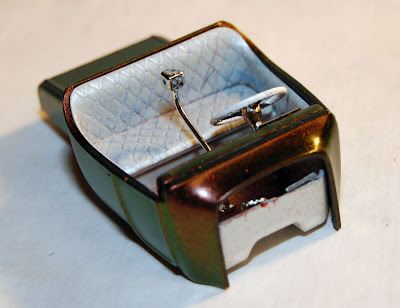 The paint is very heavily flaked, but for a show car/rod that seems OK to me. Getting the 40 Ford dash in there was quite a task, as was the photoetched dials and whatnot, but I'll go over that in a later post. 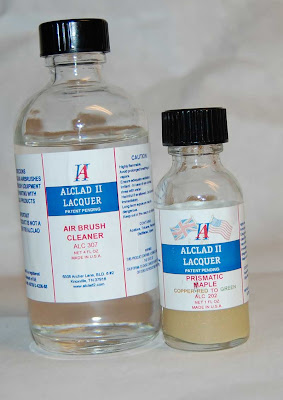 One thing about Alclad II--it ain't cheap. A small bottle is about $8 and the thinner was fairly expensive too. I understand that Alclad II is handmade, a guy-in-his-garage type operation, and some teenager who works for Mr. Alclad sticks the label on every bottle by hand, so I can see why it costs a bit more than some other paints.

Anyway the Alclad was applied with my trusty single-action Badger 200 and a cheap Testors compressor that a friend is loaning me....I read somewhere that Alclad goes on better with a gravity fed airbrush rather than one that draws the paint out of a bottle and I agree with this, having tried applying Alclad with both--the gravity cup method seems to work better, giving a smoother and more even finish, but I can't say why. 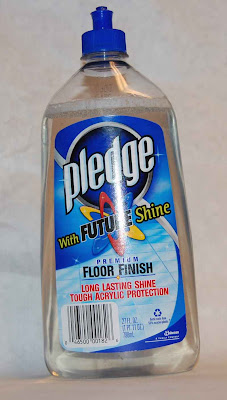 I continue to experiment with Future Floor polish. It looks good over lacquer and so I used it here. I brushed it on--after some trial and error I have concluded brushing looks better (well, shinier, anyway) than spraying Future with an airbrush, and it certainly is easier to apply via a paintbrush. But the best thing about future, well two best things: it seems to cover absolutely anything I have tried without crazing, and for 5 bucks you get a ton of it--it's really cheap compared to other clearcoats!

I haven't polished anything yet and may not polish this one at all, as I am afraid of rubbing off the "Future". Don't want to rub off the future!

Right now I'm bleaching the firewall which I am probably going to paint red to match the engine block. Maybe by next week I will have the wheels/tires done and maybe even the bling and finishes.
Posted by Charlie Lamm at 9:39 PM