As I said last time, the first step to the Texas old-skool rod build was to figure out how to capture the stance and how radically to Z the frame.

Major breakthrough? After studying the photos of the 1:1 car and doing some mock ups with popsicle sticks it dawned on me: the way the 1:1 car was Z'd was really easy!

As far as I can tell, the lowest tangent of the rear brake drums were on the exact same horizontal plane as the lowest part of the frame.

I figure the unknown mechanic cutting up frames in Texas in the late 40/early 50's didn't have complex jigs to work with or anything automated. He probably was a WWII trained mechanic who could weld anything to anything, and the resulting frame was probably tough as a tank, but as far as anything else involving the Z, it had to be as easy as it could be to build.

So this mechanic (not my dad) must have put the rear axle/differential/brake drum assembly on the floor of his garage, cut the chassis, moved the rest of the frame in front of the rear axle, and welded everything back together. I'm going to do something like that for my 1:25 scale frame. 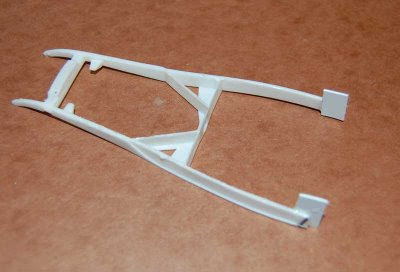 After spending something like $10 and waiting 7 weeks to get my stock 32 frame from "Replicas and Minitures of Maryland" it took a lot of courage to chop it up so I could Z the frame. But I did. I am not sure exactly how the 1:1 frame was welded back together as no pictures exist of just the frame. So I am going to guess some sort of gussets were welded to each side as a first step. 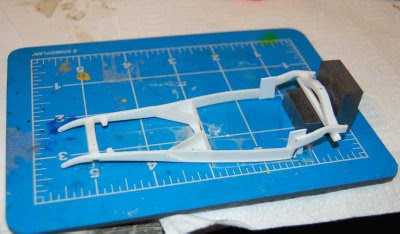 Then the rear was welded back in place using the gussets to hold things together. I am using Devcon 5 minute epoxy, which sticks to resin "like glue". Alignment is key! Even on a model! 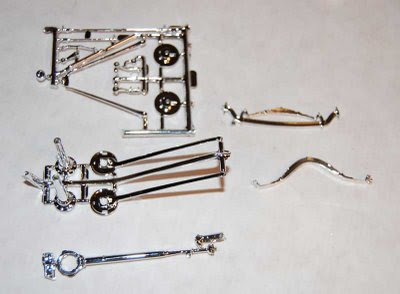 The 1:1 mechanic had to wait for the metal to cool down; I have to wait for things to dry. In the meantime I stole the chrome suspension parts out of Revell's most excellent "'29 Ford Pickup" # 85-2085. This is left over from last month's 25 T build--I used the engine out of the 29 Ford, but not the suspension. Since there is almost no chrome on the 1:1 car these are going into a container of bleach to get rid of the chrome finish.

To reproduce the "welds" on the Z'd frame I am using Tamiya light-curing putty. It's not cheap--$15USD for a small tube--but it dries fast when left in the sun and can be really easily sanded and filed down without pitting or breaking off. 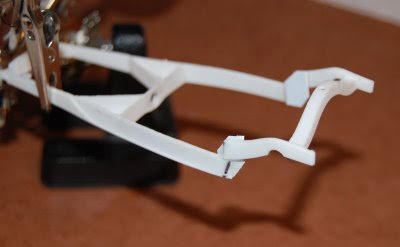 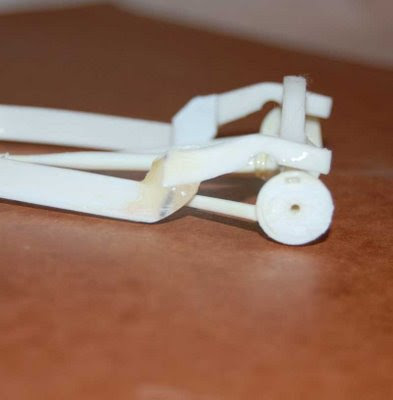 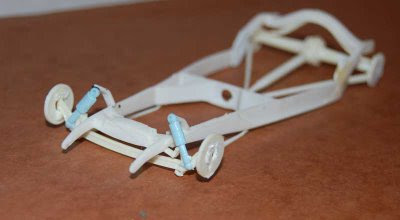 The front is from the same 29 Ford Pickup Revell kit. The bleach softened the plastic and some of the bits that would have made the front end "steerable" broke off, so, it's going to have fixed front wheels. Not the end of the world. 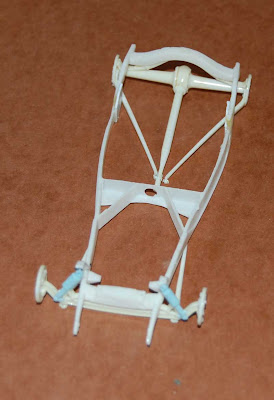 So here's the frame so far. The front shocks came out of AMT's 29 Model A kit #6572--left over from another earlier kit bash. The stalks that shocks mount to were scratchbuilt from parts box left over bits. The stock tie rods were cut up and attached to the sides of the frame instead of meeting under the engine block; this is the same as on the 1:1 car.

I have ordered some engine parts (manifold, heads) and am waiting for those before I start building the engine. In the meantime I am going to have to scratchbuild the interior as the one that came with the resin body is way too "kustom". I am a bit nervous about pulling this off....we'll see how I do next time.
Posted by Charlie Lamm at 3:52 PM