Before I go into this next project, a confession: I come from a family of car nuts. My dad and my brothers are really into cars. Some kids had a basketball hoop in their back yards growing up--my family had a hydraulic car lift (really!)

Cars. Where would the Lamms be without them? Back in the 60's and 70's if my dad wasn't out fixing some crazy car (with my brothers' and my help, whether we liked it or not), he was having us wash a car (with no soap--just water and a shami--sure as shootin', can't wreck that paint!) and if there were spots on the windshield, you can bet we'd be out there doing it over again....

My dad is a successful automotive historian, book publisher, and non-fiction writer--now pretty much retired, but still as sharp as ever, and always ready for anything related to cars. And my kid brother, who followed in my dad's footsteps professionally, is an accomplished journalist, car magazine editor, and race promoter (and may be even more of a fanatic about the automobile then Dad, which is a bit hard to believe!)

I managed to shun the car culture most of my life, saying I don't like to drive (which I don't. My brothers are tease me about what a crappy driver I am, and they're right, I admit I am a "distracted" driver). My disinterest in cars was omnipresent until the model car hobby (inexplicably) bit me. Perhaps it's a latent trait that is passed down the Y chromosome, finally expressing itself after 35 odd years of being hidden away. I can't say for sure.

So on with the build: I've now built 3 open-wheel scale hot rods: a 29 Model A, a 32 highboy, and a 25 T....and it was all to develop the skills needed for the project I just started in earnest--I call it the Texas Old Skool Hot Rod project.

Here's a pretty good picture of the 1:1 hot rod:

This is a yearbook photo of my dad, age 17 or so, in La Feria Texas, when he was in high school. I saw this picture and flipped--besides being a really cool picture of the old man when he was a youngster, his car is the real deal. I mean the real McCoy sort of real deal. I think most "Rat Rodders" would give their front teeth for a hot rod like this; the stance, the homemade look, the wire wheels, the cool windshield, everything about it smacks of how hot rods really ought to look. According to me, anyway. 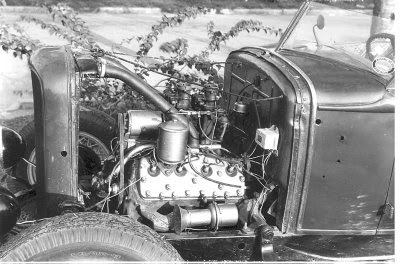 It would be fun to try to recreate this in 1:1 scale, and I haven't given up on that idea, but, for now I will attempt to capture a very small bit of history by trying to make a scale replica of it and giving it to my dad as a gift. Even if it comes out only OK, he'll treasure it I'm sure, and it will be fun working together with him on the technical details. 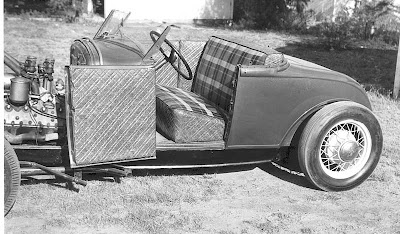 A few months ago I sat down with my dad and started to take extensive notes on the Texas old skool hot rod. Even though he built it over 5 decades ago he has an amazing memory of its construction. For instance, the windshield came off a speedboat, and the dash off a 40 Ford. The interior seat covers were plaid and the inner door panels some sort of home made green checkerboard stuff, made from cardboard. 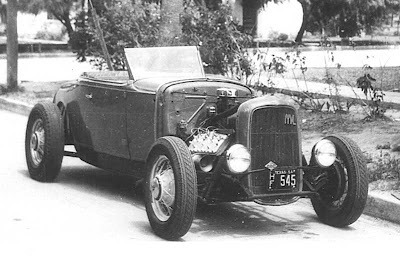 He can't remember everything though. The body is a 31 Model A roadster, and the frame/suspension/radiator shell from a 32, but he couldn't remember if the frame was "Z'd" or not. From some careful analysis of his photos, zooming in with Photoshop over and over, etc., I figure the frame had to be Z'd to give the hot rod its stance. So I am going to start with a stock frame, or the closest thing I can find, and try to reproduce how I figure the Z must have been done.

He didn't have pictures of every angle of the car, but when we looked over photos of other cars on the internet he'd say "oh yes, that's just like the rear end on my old hot rod." So I have that to go on as well. 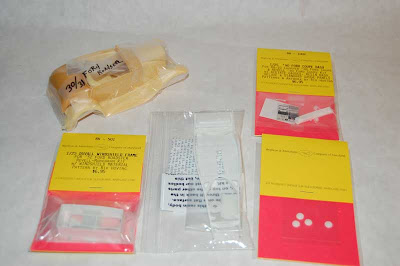 I ended up discovering that getting plastic stock 32 frames and 31 Model A bodies isn't easy. In fact, I cleaned out Ebay of every plastic 32 and Model A 1:25 kit I could find, trying to get this or that part for this build, but to no avail--opening the box, more often than not, I found that part didn't work since it was too far from "stock". Fortunately: like so many other hobbies there is a lively "after market" scale auto culture on the internet, and that's where I ultimately found the major components for this build. I ended up buying the nearly stock 1:25 32 resin frame from "Replicas and Minitures of Maryland" and the body from "Jimi Flintstone's Resins". I am going to have to scratch build a lot of parts that I can't find elsewhere, which is going to take a lot of time. 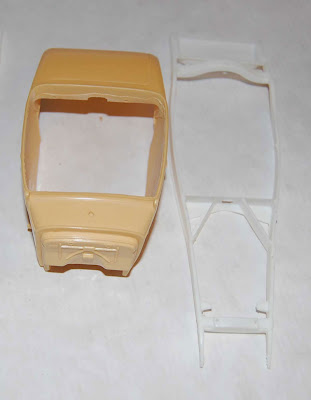 I figure the first thing I need to do is try to Z the frame (resin--I have never worked with this material before, so that alone is going to be a challenge), do a rough mounting of the body, try to get the suspension and wheels in place, and see if I can nail the stance. If I can do this, it will go a long way to getting the overall build looking right--this entire project is going to push my modest modeling skills to the limit, and I'm not entirely sure at this point I can pull it off! Stay tuned!
Posted by Charlie Lamm at 8:51 PM